Building Blocks: New Faces Shine in a Blowout of Duke

A pair of freshman o-linemen impress, Pene displays upside in the trenches, King's cuts and attitude runs, and more in this 9-play, 2,500-word film review. 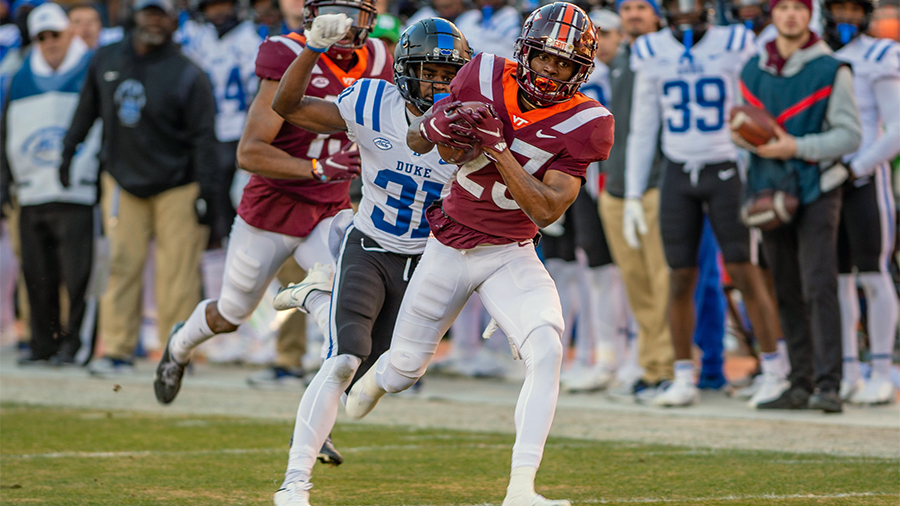 Building on the theme of last week, I evaluated Virginia Tech's matchup against Duke as a platform to identify which players have the ability and pride in the future to turn the program around. Throughout their 48-17 win over the hapless Blue Devils, some surprising young figures stepped forward and delivered contributions not easily seen in the boxscore. While several of the same problems I have documented all season persisted at key moments (including the increasingly lackluster man-to-man coverage by both cornerbacks), the Hokies dominated both lines of scrimmage and managed to comfortably shred Duke's press coverage with the vertical passing game.

A King to the Left of Me, Freshmen to the Right

Two players who should be part of Tech's foundation for a long time are freshmen right guard Kaden Moore and right tackle Parker Clements. While both have struggled at times, they have acquitted themselves better than what is fair to ask freshmen offensive linemen. Against Duke, both showed the physicality and mobility that are critical for a zone option run attack.

Outside of pre-snap penalties, the biggest area of improvement for Moore is his frustrating habit of stopping his feet at the point of contact. This has hindered his ability to scoop back-side defensive tackles in the run game. Against Duke, it appeared that Moore and Clements were allowed to adjust the run scheme to mitigate that weakness.

On the above zone read, Braxton Burmeister looks to option boundary defensive end R.J. Oben (No. 94). Tight end Nick Gallo veer releases outside of Oben, leaving him unblocked to choose between Burmeister and Raheem Blackshear. Gallo then climbs up to safety Leonard Johnson (No. 33).

Defensive tackle Gary Smith III (No. 58) lines up in a 3-technique on Moore's outside eye. Normally on a zone play, Clements would scoop Smith and Moore (No. 68) would climb to the linebacker. Instead, Moore blocks back on Smith, while Clements (No. 70) pulls to the inside (what I refer to as a "roll it" call) and leads up on the middle linebacker, Dorian Mausi (No. 35). Clements showed really nice athleticism to climb up to the second-level and get square on Mausi while keeping his feet moving. Save for the optioned Smith, the Hokies got a hat on every other defender in the box and Blackshear found the right cutback lane.

As the game progressed, Moore and Clements showed the capability of scooping the Duke front without the benefit of the roll it block. Check out their play on Tech's first touchdown.