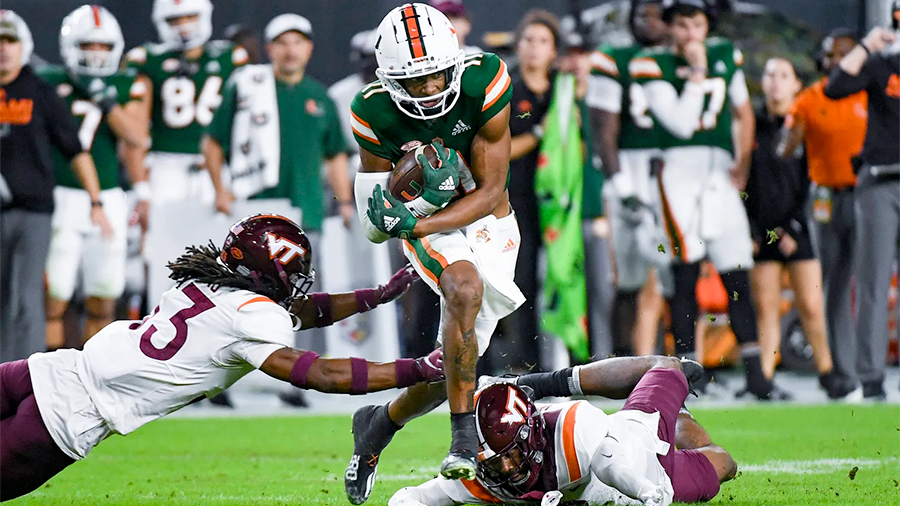 Hope. It was a lost word in the context of Virginia Tech football over the last two seasons. Though after the mutual parting with Justin Fuente, I saw a glimmer of it among the Hokies fan base sparked by interim head coach JC Price's moving press conference and interactions over the past week. Unfortunately, in the football world the right message sometimes falls on deaf ears. The reality of the current state of Virginia Tech football hit home on Saturday night in Miami, and no amount of heartfelt speeches can change the current situation in one week. The lack of talent at key spots was evident. The uneven effort and attention to detail across the roster shined through, as some players fought their guts out, while others looked like they would rather be anywhere but Hard Rock Stadium. Justin Hamilton, as beloved a personality as the program has had in the Fuente era, looked outmatched against Miami offensive coordinator Rhett Lashlee's vertical passing offense. Hamilton's personnel decisions also left something to be desired. (What does Keshon Artis have to do to get more time on the field?) And finally, we again watched Brad Cornelsen grind his quarterbacks into long-term disability, while abandoning plays that were working against a weak Miami interior. Now, with Virginia on the horizon and new coaching candidate rumors swirling, the Commonwealth Cup and ACC relevance feel like they are moving out of town right along with the Fuentes.

Lashlee's scheme relies heavily on vertical passing concepts since quarterback Tyler Van Dyke took over the Hurricanes' quarterback duties. Four verts relies on creating an outnumbered situation in deep zone coverage. If a defense plays Cover 3 or Cover 2 against four or three verts, it guarantees either an open receiver or a favorable one-on-one against a safety. I fully expected Justin Hamilton to play Cover 1 (which has been Tech's primary coverage all season) or Cover 4 (show man, but have four defenders deeper than the deepest receiver, each with complimenting leverages on crossing receivers).

Instead, Hamilton mixed in steady doses of Cover 3 and Cover 2. Paired with fundamental breakdowns by Tech's secondary, Miami recognized and feasted on those defensive schemes. Watch Miami's opening offensive play.

The Hurricanes lined up in a two-tight look, with tight end Will Mallory (No. 85) to the boundary and slot receiver Mike Harley (No. 3) as a tight wing to the field. Boundary safety Nasir Peoples (No. 31) and nickel Chamarri Conner (No. 1) flex toward the box, leaving Tae Daley as a deep middle and corners Jermaine Waller (No. 2) and Armani Chatman (No. 27) as deep outside thirds in a Cover 3 deep shell. Field receiver Charleston Rambo (No. 11) has one-on-one coverage to the field-side, leaving a ton of room to work against corner Jermaine Waller (No. 2).

In this case, Van Dyke targets the one-on-one with the most available space. In this coverage, Waller has to stay deeper than the deepest receiver in his zone. Note, Waller backpedaled all the way to the 40 yard line. Rambo was almost on top of him before Waller turned his hips to run. When defensive backs are even, they are beat. Rambo gets Waller to turn his back to the football, and Van Dyke makes a nice throw with the ball floating to the sideline, giving Waller no chance to make the play.

It wasn't the last time Waller's cushion was exposed.