The Price of Positivity: Film Breakdown of How the Hokies Pulled the Upset in The Commonwealth Cup 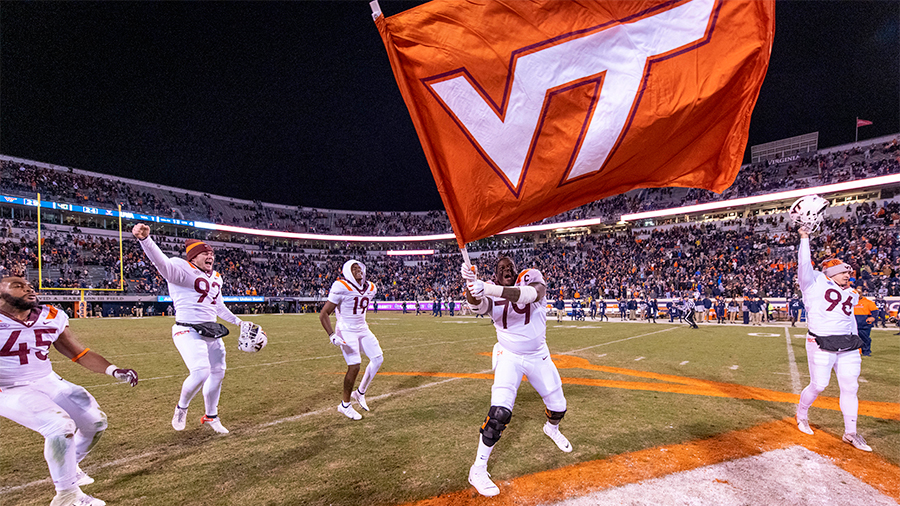 JC Price understood. Despite an offense moving at will against a porous UVA defense, Virginia Tech's odds of coming away from Charlottesville with a win after trailing 21-17 at halftime felt slim. Justin Hamilton's defense looked unwilling to match Virginia's physicality. Tackling was abysmal, and the secondary looked confused and lethargic, particularly in the aftermath of yet another completed pass. Meanwhile, Brad Cornelsen was insistent on imploding any offensive momentum with a seemingly nonsensical quarterback rotation and goofy plays when zone runs were netting 10 yards a carry.

Worse yet, Price's inherited team looked checked out. The emotion and exuberance you'd expect on the sideline in a rivalry game wasn't there. Players looked tired and confused. But Price stayed in the trenches with his squad. He clapped. He celebrated little victories, like John Parker Romo's critical field goal before halftime. Hell, Price was getting his players to hold up the "four" to signal fourth quarter dominance. Somehow, Price cajoled enough out of his team to come home with the Commonwealth Cup. Much of the credit goes to Braxton Burmeister and Raheem Blackshear, who both delivered the best performance of their careers, to go along with an offensive line that controlled the line of scrimmage. A change in defensive philosophy and some personnel switches in the secondary took away a great deal of the space for a banged up Brennan Armstrong.

Building off Bread and Butter on Offense

Tech's offense was at its best when they kept it simple, and then built off success with play-action. On the opening play of their second drive, Cornelsen went with tendency and called a basic inside zone from a bunch formation.

This wasn't particularly well blocked. Defensive tackle Jahmeer Carter (No. 90) splits a combo block by center Brock Hoffman (No. 76) and right guard Kaden Moore (No. 68). Carter's persistence prevented Hoffman from climbing to pin inside linebacker West Weeks (No. 33) to the inside. However, Blackshear, who played the game of his life as a Hokie, ran through Weeks' arm tackle to set up a manageable second down.

Following a conversion on a short pass to emerging freshman Da'Wain Lofton, the Hokies again showed a heavy run tendency formation, this time with two tight ends and twins to the field.