Inventing Ways to Lose: Reviewing Another Hokies Loss in Norfolk 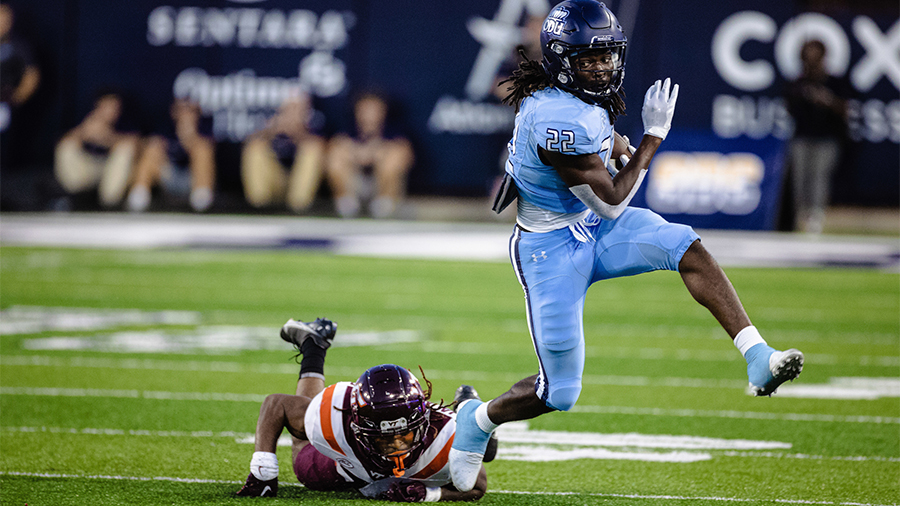 I wish I could say I was surprised, but the notion that Virginia Tech's cupboard is stocked at a G5 level became a cold hard fact on Friday night. Despite a well-executed defensive game plan, dreadful offense and special teams coupled with a handful of late secondary busts spelled doom for a game that was less pleasant to watch than an episode of Real Housewives of Potomac. Penalties, special teams snafus, and inexcusable turnovers by quarterback Grant Wells made Brent Pry's debut one that dampened almost all the enthusiasm he built during a whirlwind campaign of off-season fan engagement.

It is really difficult to evaluate this loss. The defense executed Pry's gap scheme much better than I expected, with defenders playing on Old Dominion's side of the line of scrimmage all evening. Dax Hollifield and Nasir Peoples delivered two of the best tackling games we have seen from Tech defenders in several seasons.

The offense was painful to watch. The absence of a threat to take the top off the defense allowed Old Dominion to drop extra defenders into the box, while receivers with length and upside sat on the bench even after Kaleb Smith's hamstring injury. Wells threw inexplicable interceptions. And while many Tech fans lamented the 15 penalties, the Hokies were fortunate to avoid several additional offensive pass interference calls, several holdings (most often by right tackle Parker Clements), and a clear as day high/low block. The defense played with discipline and looked sharp outside of a nervous looking Jayden McDonald during his first start. The offense and special teams exhibited none of that composure.

Matching Behind the Blitz

As I wrote back in March, the Hokies would blitz a lot and match to receivers in zones behind the blitz. I thought the Hokies would struggle trying to execute matching concepts given recent troubles with linebacker coverage.

However, I was pleasantly surprised when the linebackers sharply matched on ODU's crossing routes.

On this 2nd-and-4, Tech shows a pressure to the boundary. The boundary safety, Peoples (No. 5), walks up to the line of scrimmage. However, he eventually backs out and SAM linebacker Keonta Jenkins (No. 7) blitzes from the field-side. Behind the pressure, field safety Chamarri Conner (No. 1) covers the deep half to the field, while Armani Chatman (No. 9) has the deep half to the boundary. Underneath, Dorian Strong (No. 44) has the field flat, while the MIKE linebacker, Hollifield (No. 5), has to match any route coming from the field-side into the middle of the field. Slot receiver Isiah Paige (No. 5), runs a drag route. Hollifield recognizes the route quickly and gets his hips turned to run with Page. Quarterback Hayden Wolff read Hollifield as the vulnerable matchup instead of challenging the two deep one-on-ones, even though Hollifield had outside help from Strong to the field and Peoples in the boundary flat. The pass fell harmlessly incomplete.

On this second down play, Pry called a five-man pressure.