A Quarterback Mugging: The Defense Shines in a Lane Stadium Shellacking of Boston College

A dominant defensive performance and no offensive mistakes offset another shaky offensive performance in the first win of the Brent Pry era. 2,800-word, 11-play film review analyzing how the defensive scheme and execution pressured BC, Tech's continued run blocking woes, and how misdirection and players just making plays helped the Hokies win the game. 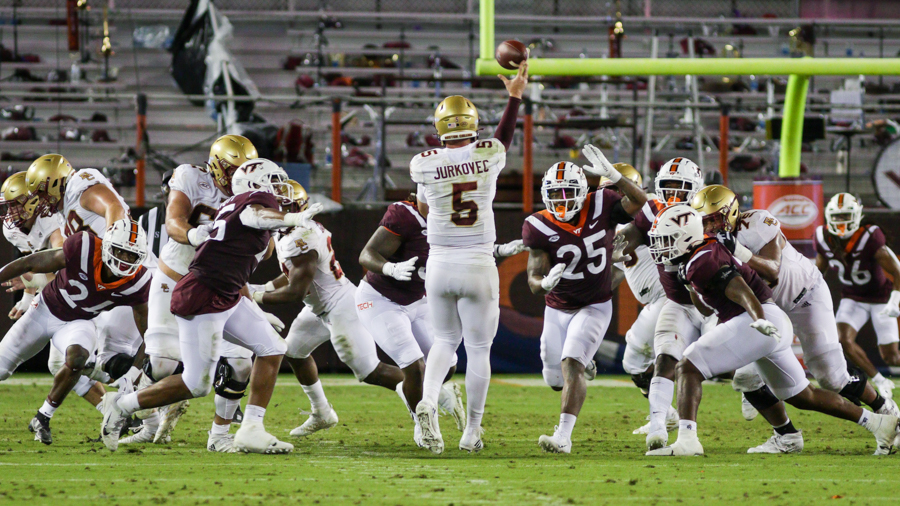 Only two games into the 2022 season, and it has become pretty clear what winning will look like in year one of Brent Pry's rebuilding effort. The Virginia Tech defense has thus far exceeded all expectations, showcasing pursuit not seen in the better part of a decade, getting bodies into the gaps with a dizzying array of pressures, while matching effectively in coverage. The offense is, frankly, painful to watch, much as it was during the Hokies' ACC dominance in the late 2000s. Last week, penalties and turnovers proved to be the difference against Old Dominion. Against Boston College, the Hokies protected the football and had fewer penalties and won the game without much drama. And most importantly, when things didn't go to plan, several Hokies made plays on plays where Boston College had a chance to swing momentum early. Pry, and especially his defense, looked confident and sound, while not flamboyantly celebrating the almost constant assault on NFL prospect Phil Jurkovec. It was a positive building block in a season where adversity will be a constant, and future turnover on the roster looms large.

The Hokies front four looked like they had played in Pry's defensive scheme for years. TyJuan Garbutt in particular got to flex his speed because the scheme allowed him to attack gaps instead of worrying about contain.

Garbutt didn't just have the speed advantage over lumbering right tackle Kevin Cline (No. 79). He also knew that he had to fit the A-gap rather than worrying about reading the play. He uses a sharp inside rip move to cross Cline's face, and then instead of getting washed inside (as he often was in the past), he turned up the field, resisting pressure from Cline and made the tackle in the backfield.