Inconsistency in the run game made the pre-West Virginia scrimmage against Wofford closer than needed. Examining two Virginia Tech passing concepts, technique and execution errors holding back the run game, and the emergence of two young d-ends. 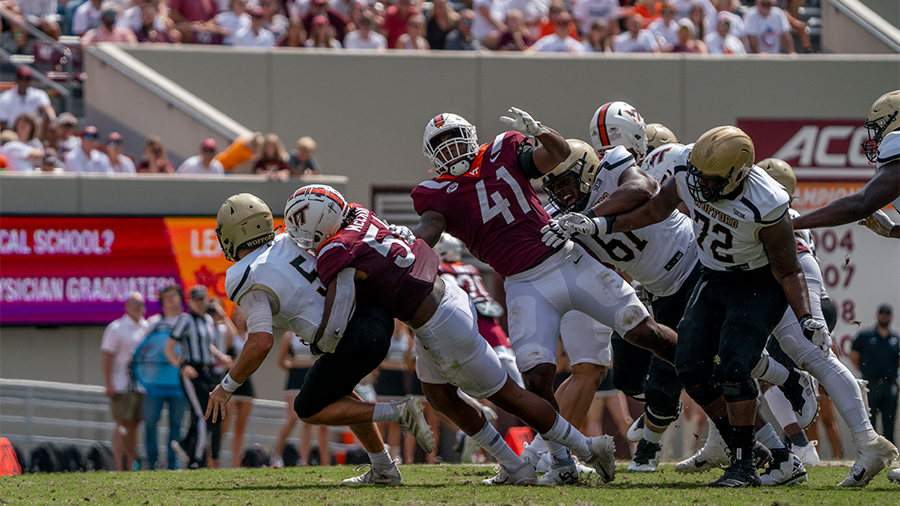 While many had hoped for a more entertaining and convincing win against woeful Wofford, Virginia Tech moved to 2-1 in a tepid affair. Three games into the season, and the picture of the 2022 Virginia Tech football team is becoming clearer. The defense, even missing some key veterans, completely stymied the Wofford offense with little use of the zone pressures we saw so much of in the first two games. Though, that group didn't generate the quick shock plays that increase the margin of error for its struggling offensive counterpart. Wofford showed the Hokies a variety of coverages, and offensive coordinator Tyler Bowen showcased some passing concepts that got receivers open against man and zone. However, if the Hokies want an opportunity to contend in the Coastal division, their run game has to become more efficient.

Bowen seemed very focused on using the FCS matchup to get more of Tech's secondary receivers touches and instill some confidence in quarterback Grant Wells. Bowen called two route structures repeatedly over the course of the game, with slight adjustments depending on coverage to make the plays more difficult to defend.

The first builds off the wheel route to the tailback seen several times against Old Dominion and Boston College. The concept is pretty straight forward. A receiver to the boundary runs an inside route and the tailback wheels outside in the flat. Against ODU and BC, the route was an inside release vertical, designed more to pick the linebacker or safety responsible for the tailback releasing into the flat as it was to be a viable throwing option. Both the Monarchs and the Eagles ran more man and Cover 3 looks. Wofford played more Cover 2 and umbrella zones, with the corners staying in the short flat. The adjustment was to inside release the outside receiver and hook up around the hash mark. Wells' job was to read the corner. If the corner stayed wide, Wells would make the quick throw to the hook route. If the corner followed the receiver inside, the tailback on the wheel route would potentially provide a big play option.

Here is the same concept with different reactions by the defense.

Corner Okachi Emmanwori (No. 6) stayed wide to account for the wheel route by Jalen Holston (No. 0). Split end Christian Moss (No. 85) ran a short hook route to the inside. Meanwhile from the field-side, tight end Nick Gallo (No. 86) ran over to the boundary and hooked up in front of boundary linebacker Eli Purcell (No. 8). Gallo's route froze Purcell an extra second, providing Wells with a comfortable throwing lane to his Moss.