Talent gaps, the complete absence of a running game, and the first cracks in Virginia Tech's defense all serve as red flags that a long and painful season is in front of the Hokies. Eight-play, 2,700-word film review of the talent and scheme issues that held the Hokies back. 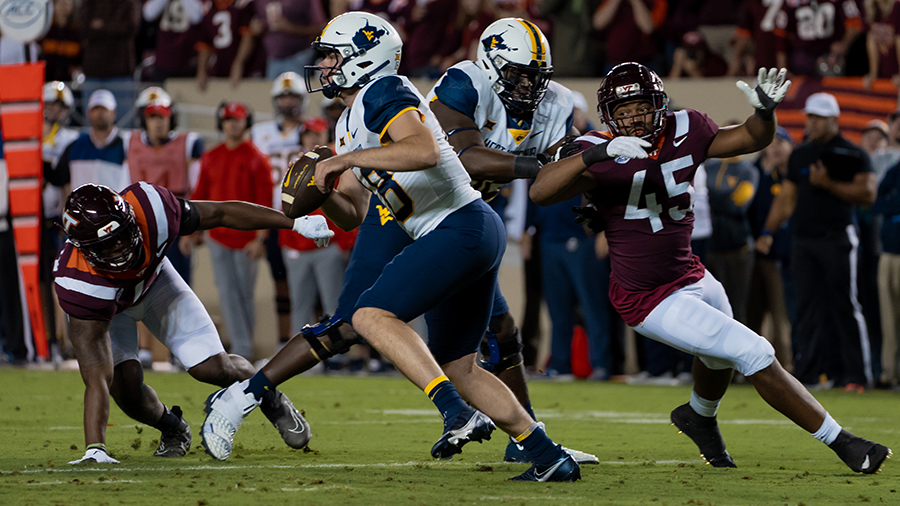 All the pageantry of Virginia Tech's glory days was there on Thursday night. A sold out Lane Stadium with ESPN in town, and optimism that an outstanding defense could overcome a static offense. But then the whistle blew, and the reality of the current state of the program poured over the crowd like a bucket of ice water. West Virginia, a 1-2 team with a loss to Kansas, was significantly more talented and better prepared in 2022 than the Hokies. The Hokies couldn't exploit the Mountaineers' abysmal secondary, in part because of the complete absence of a viable run game. And for the first time this season, Virginia Tech's defense cracked against an offense that had enough talent that I am not sure a single Tech starter would find themselves over their WVU offensive counterpart. That is the state of the program right now.

The talent gap was evident, and I warned our patrons long ago that they needed to prepare for a rough season. The more concerning reality was that, despite the discrepancy in Jimmys and Joes, the Hokies had opportunities to win the game or make it much more competitive, but they self-destructed. A myriad of penalties on defense, largely on plays where an outclassed defender tried to close said gap with an extra tug, pull of the facemask, or late hit, extended West Virginia drives and eventually the dam broke. The offensive penalties are much less excusable. Pre-snap snafus and assignment confusion only made the talent differential look exponentially worse. Defensively, the Hokies were outmanned, and improved recruiting and player development can bridge that deficiency long term. However, offensively, the Hokies looked completely lacking in their confidence and preparation. Of all the flags that were thrown on Thursday night, the red flag is that the offensive staff doesn't seem to have an answer for how to overcome the depleted cupboard. Brent Pry's long term viability as a head coach will rest on his offensive staff's ability to compliment the defense, and right now it's an anchor.

No Scheme can Overcome an Ass-Whipping

It was difficult to pin down where to begin assessing the Hokies offense. While there were issues where I expected a better performance from the coaches, this game really showcased how limited Tech's offense is from a talent perspective. The tailbacks were ill-equipped to win one-on-one battles when they had a rare opportunity to break out. The wide receivers were not able to consistently get separation against a very poor secondary. Grant Wells missed several throws when he had receivers open, and he stared down receivers. There wasn't really a positive to latch on to.

However, the battle in the trenches between Tech's o-line run blocking and WVU's d-line featured the greatest disparity. I saw some improvement in footwork, angle, and contact points from the offensive line, but despite those improved fundamentals the Mountaineers' front just plain whipped their ass once contact was made.

To offensive coordinator Tyler Bowen's credit, he attempted to use some misdirection to help create space for his tailbacks.

On the above variation of the oft-run counter-trey, the Hokies lined up in an odd look, with both Drake De Iuliis and Nick Gallo as wings to the field-side. Right guard Kaden Moore (No. 69) pulled to seal defensive end Taijh Alston (No. 12), and Gallo (No. 86) followed to kick out the edge defender, linebacker Exree Loe (No. 6).