The return of Malachi Thomas proved to be a big boost to the Virginia Tech running game, but poor run fits doomed the Hokies in their loss to Pitt. 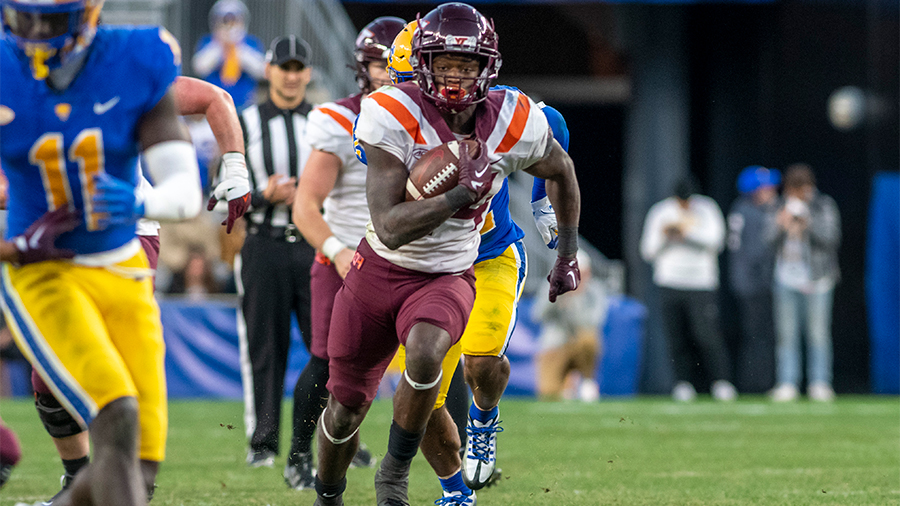 If you were looking for improvement from the Virginia Tech offense, you saw it on Saturday.

The Hokies awoke from a deep offensive slumber in their 45-29 loss at Pitt, crawling back from a two-touchdown deficit in the third quarter to nearly tie the game before a late defensive collapse sealed defeat. Virginia Tech's offense averaged 5.23 yards per play, their best mark against an FBS team this season, as well as 4.20 yards per rush, also a season-high. Quarterback Grant Wells had his best statistical performance of the year, turning in a 67.8 QBR which — while not exactly eye-popping — was a welcome improvement from last week's dreary performance against North Carolina (39.7). With the addition of Malachi Thomas at running back, Tech's run game showed a pulse for the first time all season, generating four plays of 15 or more yards.

But at the same time that the offense improved, the defense regressed. Heavily. Pitt running back Israel Abanikanda had a career-day, rushing for 320 yards on 36 carries with six touchdowns. In so doing, he broke the school's single-game record for rushing yards held by Tony Dorsett, which had stood since 1975. I never thought anything could get worse than the Pitt game in 2018 — the best performance by an FBS team since, well, ever — but it did.

Today, I will discuss the good, the bad, and the ugly from the loss to Pitt. As you might suspect, there was a healthy sampling to choose from all three categories.

I am a firm believer that a great running back can make any mediocre offensive line look good. With Malachi Thomas having returned from injury, Virginia Tech's ground attack finally found the spark they were looking for. Thomas averaged 5.6 yards per carry on 15 attempts with one touchdown, including a game-high 29-yard carry in the fourth quarter — the Hokies longest run since their Week 2 matchup against Boston College.