Elkomania runs wild on the Hokies

The Hokies continued to spiral as Duke gameplanned magnificently to exploit Virginia Tech's biggest weaknesses on both sides of the football in a stinker of a loss in Durham. 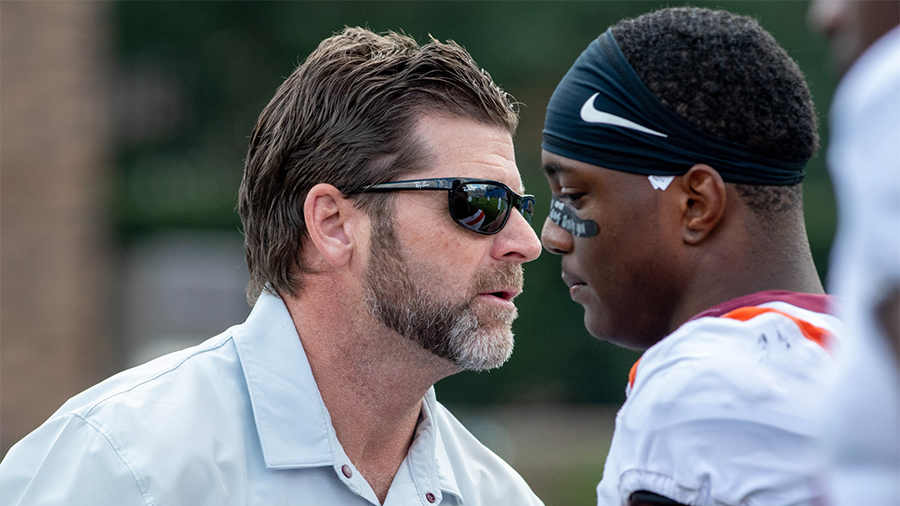 After consecutive weeks of blowing late leads, Virginia Tech stunk out the mausoleum known as Wallace Wade Stadium. The Virginia Tech offense completely abandoned the tailback run game early despite some initial success with play-action passes. The offensive line was bamboozled against Duke's exotic blitz packages, giving maligned quarterback Grant Wells almost no time to scan the field. Even though Duke didn't put up huge numbers on the scoreboard, Riley Leonard and his offense seemed to have just enough space to comfortably move the sticks every time the Hokies were in position to get a momentum changing stop. Worse yet, Tech's body language looked like their enthusiasm and commitment to playing aggressive hard nosed football no matter what the outcome has left the barn. Brent Pry and his staff tried to work in some of the potential future pillars, with Tucker Holloway and Malachi Madison getting some limited cameos. However, it is becoming apparent that the leftovers from the Justin Fuente era are not solutions, and Pry doesn't feel like there are enough young players with the upside to get more work ready to step in and take some lumps to aid in their development.

What is the worst case scenario for an offensive line and quarterback in the midst of a woeful season?

The Duke head coach is perhaps the best defensive mind in the country for identifying offensive tendencies for setting protections, and then aligning his front to roll a protection one way and bring pressure away from the protection. Virginia Tech puttered through an anemic offensive performance, but every time the Hokies had an inkling of momentum on offense, Duke's defense derailed it with pressure on Wells.

I am not sure how Elko does it, but he somehow manages to cast a spell on the opposing offensive staff. Duke repeatedly used the same pressure concept on third down to get unblocked hats rushing Wells. The concept involved using a three-man defensive line, with multiple second-level defenders lining up in gaps to one side. Then once the protection was set to roll the offensive line to the overloaded side, the Blue Devils would back out right at the last second and bring pressure from the other side. Virginia Tech never adjusted. Even more confounding, most of these pressure concepts Elko has been using for years. If you go back and look at Tech's loss to Wake Forest in 2014 with Elko in charge of Wake's defense, Scot Loeffler and Stacy Searels were just as bedeviled by Elko's manipulation of the protection calls as Tyler Bowen and Joe Rudolph were in 2022.

Watch this early example. Tech faced a 3rd-and-3 on its possession after Duke went ahead 10-7, and the defense, which spent nearly two thirds of the first half on the field, desperately needed its offense to sustain a drive. Defensive ends R.J. Oben (No. 94) and Ryan Smith (No. 40) aligned very wide, with nose tackle Aeneas Peebles (No. 92) inside. Linebackers Shaka Heyward (No. 42) and Tre Freeman (No. 12) loudly show pressure in the A- and B-gap, respectively, to the field, and field safety Jaylen Stinson (No. 2) feigned forward like he was going to blitz after Jadan Blue (No. 2) motioned across the field. Accordingly, the Hokies rolled their protection to the field-side.

When the ball was snapped, Freeman immediately backed out into zone coverage while nickel back Brandon Johnson (No. 30) blitzed through the B-gap back to the boundary. Heyward twisted back to the boundary side behind Peebles to follow Johnson, just in case he got blocked by right guard Kaden Moore (No. 68). Moore stepped to his left as he was supposed to in the protection and then tried to redirect back outside, but wasn't quick enough to pick off Johnson. Keshawn King (No. 23) stepped outside as if he expected right tackle Parker Clements (No. 70) to pick up Johnson instead of Oben, and couldn't redirect to cut off Johnson. Before Wells could even bring the football into a throwing position to throw to Dae'Quan Wright (No. 13) or Kaleb Smith (No. 80) on short crossing routes, he twisted himself into the ground to avoid the unabated Johnson.