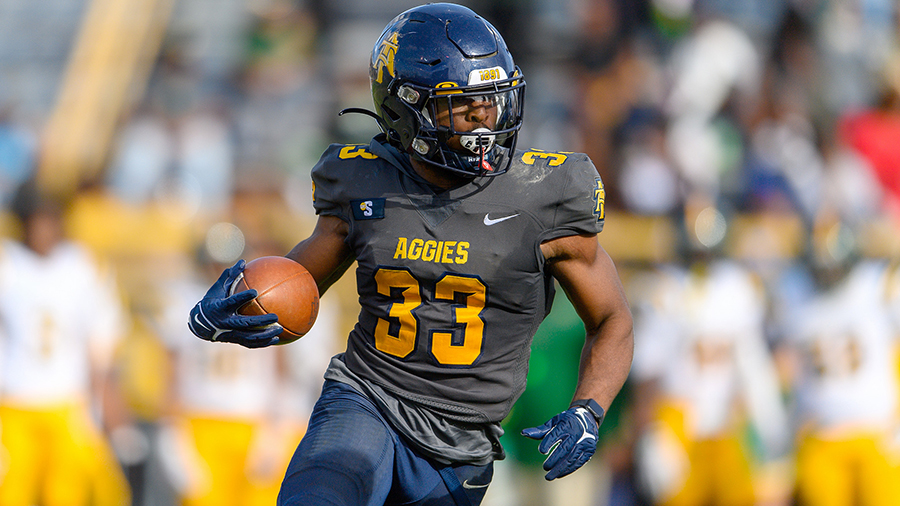 Virginia Tech's running back room complexion changed significantly this past weekend. North Carolina A&T running back Bhayshul Tuten announced that he would head to Blacksburg after previously committing to Boston College. In addition to Virginia Tech, he reported offers from Georgia, Florida, Kansas State, and Pitt among other programs. Tuten was the do-everything catalyst for the A&T offense. He led the Big South in rushing (1,363 yards), which included ten consecutive rushing yard performances, including 133 yards against Mike Elko's creative Duke defensive scheme.

My initial gut reaction to Tuten's commitment was a bit lukewarm. With Malachi Thomas hopefully returning healthy, and another spring of development for the 2022 freshmen, the running back room seemed to need attrition, not new faces. Also, while Tuten's numbers were really impressive, outside of Duke, North Carolina A&T's schedule was littered with opponents who have historically made pretty poor accounting of themselves against ACC competition over the years.

Those hesitations almost immediately evaporated once I started watching the film. Frankly, Tuten had no business in the Big South. At 5-11, 195, he has a low center of gravity and powerful upper legs. The Aggies ran a zone scheme with heavy use of inside zone and split zone, similar to the concepts that Virginia Tech ran more regularly towards the end of last season.

Tuten demonstrates a decisive initial cut to get north-south into the bubble created up front, and then explodes up the field. He has great vision and rarely makes a mistake with his initial cut, a premium skill in a zone scheme. Once he commits, he has a knack for either making the unblocked hat completely miss or making himself small to minimize the impact of a tackle and push forwards. Because he rarely takes a hard shot, Tuten showcased durability, averaging almost 20 carries a game for the Aggies while also being regularly featured in the passing attack.

The Aggies run a standard inside zone read to the weak side against Norfolk State. The tight end on the boundary side veer-releases to freeze the backside edge defender. Norfolk State has a great defense called for this play, with the nickel to the field-side blitzing into Tuten's path and two linebackers filling the A and B gaps back to the boundary. In addition, the boundary safety reads run almost immediately, giving the Spartans nine defenders attacking the box as Tuten receives the football.