Tech Takes #8 Louisville to the Brink Before Falling 94-90

An offensive explosion led by Seth Allen comes up short against the #8 Cardinals. 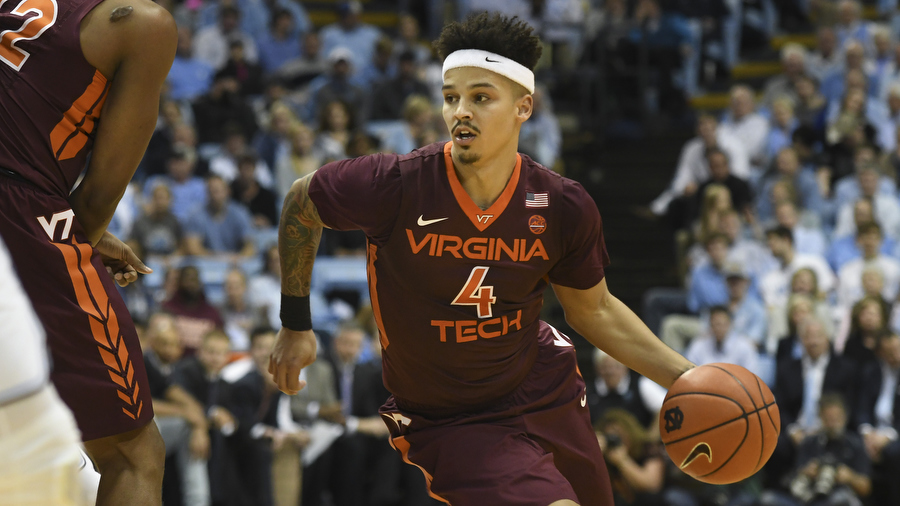 Buzz Williams' team rolled into Louisville Saturday facing arguably their toughest test of the season. The #8 Cardinals had lost only once this season at home, and entered play sporting the tenth best field goal defense and the third best 3-point defense in the country. It marked the second time in six days the Hokies faced a Top-20 defense and the first time they would do so without Chris Clarke for a full 40 minutes.

The Hokies didn't wilt under the pressure. They shot the lights out against an extremely talented Cardinals squad, but ultimately fell short in a 94-90 loss. Led by Seth Allen's 25 points, the Hokies (18-8, 7-7) took Louisville (22-5, 10-4) to the brink behind the best offensive performance of the season by a Cards opponent.

Virginia Tech's 29 made field goals were the most by an opponent against Louisville this season. Their 17 three-pointers tied the all-time record vs. Louisville set by Notre Dame in 2006. Despite all of the offensive fireworks, the Hokies were unable to pull out a victory.

Tech struggled all afternoon to contain Louisville guards Quentin Snyder and Donovan Mitchell. Mitchell led all scorers with 26 points on 5-7 shooting from three, while Snyder added 19 points and 4 assists. Down the stretch, the duo combined with rangy forward Jaylen Johnson to put away the Hokies.

The Hokies led 44-43 at halftime, closing the first half on a 24-13 run. Ty Outlaw — yes, you read that correct — led the Hokies with 11 points and 4 boards in the opening period. But the Cardinals came out aggressively to start the second half, punishing the Hokies off dribble penetration.

Down 53-51, Louisville kicked off an 11-0 run during one of the more bizarre sequences of the season. Simultaneous to freshman guard Ryan McMahon's three-pointer from the wing, Tech fouled a Louisville post player to give the Cardinals the points and another possession. Seconds later, McMahon found himself wide open in the corner and canned another three to put Louisville up 57-53.

With the game appearing to slip away from the Hokies, Seth Allen went on a 9-3 run of his own, cutting the UL lead to 65-62 with 10 minutes to play. Clearly dismayed by the offensive firepower, Allen's scoring spurt led the Louisville faithful to cry out every time he had six inches of space and forced Rick Pitino to change up his half-court defense.

The Cards began to tighten up their perimeter defense, allowing guards Justin Robinson and Allen to play a little two-man game with Zach LeDay. LeDay, who finished with 18 points and 9 rebounds, was able to neutralize the Louisville size advantage by drawing fouls and cashing in from the free throw line down the stretch. But in the end, the inside-outside combo wasn't enough to keep pace with the Cards.

It was an impressive performance from the Hokies in a losing effort. To shoot 59% from the floor and 65% from behind the arc is incredible, especially considering what the Cardinals have done to elite teams at home this season. Only Pittsburgh (80 points) came close to approaching the Hokies' point total on Louisville's home floor, and they launched 67 shots in a losing effort — by comparison, the Hokies took 49 shots Saturday. #6 Kentucky (70), #7 Duke (69), #12 Virginia (61) and #15 Purdue (64) didn't even come close to the Hokies 90-point explosion.

One week ago, Hokie Nation wondered whether or not this Tech team had what it took to punch their ticket to the Big Dance, let alone make a run to the second weekend. After a home win over #12 UVa, a road win against resurgent Pittsburgh and a gritty loss to #8 Louisville, this much is certain: The Hokies are every bit an NCAA Tournament team, and a dangerous one at that.

Saturday's game certainly had a postseason feel to it. If the high stakes atmosphere in the KFC Yum! Center didn't get you excited about the Hokies' prospects in March, then you aren't Buzzketballing hard enough.

Five Hokies finished in double figures, including 19 points from Ty Outlaw and 11 apiece from Justin Bibbs and Ahmed Hill. Outlaw played a season-high 35 minutes and looked extremely confident shooting the ball. He finished 7-8 from the field, including 5-6 from distance, and hauled in 7 rebounds along the way. He showed off his pull-up midrange game today, which was a welcome sight for a guy who has spent the season camped out behind the arc.

Buzz Williams noted in his pregame radio interview that he was concerned about the Cardinals' full court defense and expected them to limit the number of skip passes, which have been keys for the Hokies offense. Tech never really had an issue against Louisville's full court set, and their gameplan eliminated any need for skip passes. Buzz had his team extremely well prepared.

The Hokies' sharp shooting was due in part to fantastic work up top by Justin Robinson and Seth Allen. The pair continuously drove the lane, collapsing the Cardinals' defense and opening up the perimeter for guys like Outlaw, Bibbs and Hill. When Louisville increased their pressure 18-feet from the basket, Tech turned to their screen-and-roll game to open up the lane.

Though they lack the offensive explosiveness of a lot of elite teams — including the Cardinals — the Hokies combine the multi-dimensional talents of Allen with Robinson's heady play to create good looks.

What really hurt the Hokies on Saturday was their physical disadvantage down low, and that will continue to be an issue against elite teams like Louisville, UNC and Florida State. Louisville outrebounded the Hokies 16-6 on the offensive glass and 33-25 overall, leading to a 24-0 edge in second chance points.

As the season winds down, the Hokies can only control so much, game-to-game — they can't miraculously become taller or more physically imposing. They need to continue to execute their offense as best they can, regardless of the matchup. They need to battle on the glass, using fundamentals, teamwork and determination to make up for the physical disadvantages. And they need to cut down on the mental mistakes, which is ultimately what undid them on Saturday.

One thing is for sure: If they continue to shoot the ball like they did against the Cardinals, they are going to be extremely competitive, regardless of the matchup.

Tech returns to Blacksburg to take on the Clemson Tigers on Tuesday evening. Tip-off is scheduled for 7 P.M.

a road win against resurgent Pittsburgh

Pittsburgh is about to just beat Florida State, as well. Such a big win for us on Tuesday night.

Thanks for the excellent write-up! The game wasn't televised up here...

It's good to see Outlaw be able to contribute since he has no choice but to play more minutes now. We need to keep improving his confidence on the floor, and I think today was a great step. It seems to me that he is a bit of a liability on the defense end trying to guard further from the basket. Many times he was frozen when the offensive player made their first move to the basket and he wasn't able to recover, allowing several easy trips down the lane for UL.

Louisville outrebounded the Hokies 16-6 on the offensive glass and 33-25 overall, leading to a 24-0 edge in second chance points

Wow, we cut down 2 or 3 of these offensive rebounds which would remove 4 cardinal points and create at least 2 more offensive opportunities and we win. Darn!

We shot the ball well enough to win against most teams, but I knew our lack of size would lead to us getting beat up on the boards. However, there were quite a few instances where we had 2-3 guys on a rebound, and not being able to secure it, a Louisville player comes in and takes it. That drove me crazy. Take those situations away, and the game could have been a win for us. It's a shame to lose a game like that, but it was nice to see Outlaw break out, knocking down some 3s and getting big rebounds. Hopefully, he'll be able to step up his game to pick up the slack from the loss of Clarke.

Also, I hate to continue beating a dead horse, but I think if we had a healthy Clarke and Blackshear for today's game, we don't give up as many 2nd chance shots, and we win.

On the recent TKP podcast, the guys mentioned that Clarke being injured had the potential to open up our offense. I think this is exactly the case - playing Outlaw at the 4 and Leday at the 5 puts four very capable 3 point shooters on the floor, and Leday is a mismatch for a center to handle off the dribble. The perfect recipe to play inside-out as long as guys hit open shots, which happened today.

Sure, our defensive production goes up with either Clarke or Blackshear, but I'd think we would not be as effective on the offensive end either.

It seems like Outlaw's rise in minutes with Clarke out has had sort of an unshackling effect on his game.

I don't believe there is such thing as a moral victory/good loss but what that game was is what I'll call a "selection committee game". It's a game you bring up on film to the committee when they are filling in the back half of the bracket with the remaining at large teams. The narrative being "You guys said this team looked worthy earlier in the season. Yes, they might have lost a few more games but they are down arguably their best player yet they are still giving top tournament teams fits. They're still worthy".

In a lot of the advanced metrics (which could be replacing the RPI on selection committees) close loses on the road against good teams count more than close wins at home against mediocre teams. Certainly the Lville loss was a better outing for VT than ....say...the BC or GT win at home.

What you might call this is a confidence building loss. Our guys know they can run with an elite team in their buildiding. Come tournament time theses guys now have proof that that they can score and hang with any team in the country. That's a good place to be be headed into the dance.

Yep, and clear enough to hear on TV every time. It's been quite a while since I've witnessed a Hokie go on that kind of a shooting streak.

rebounding was the difference, obviously.

But OH MY GOD, Seth Allen was on FIRE. What a somewhat fun game to watch.

An offensive explosion led by Seth Allen comes up short against the #8 Cardinals.

And there you have it.

O showed up to play, D forgot to get off the plane. So different than Football...

I might be the only one to think this, but it appeared the fix was in during the second half. Officiating was very fair for both sides in the first half, and seemed to be a lot more one sided in the second. The technical on Leday was probably the best call they made in the second half and it unfortunately sealed the game against the Hokies.

It was a great offensive effort, and in the first half, it looked like we out rebounded them defensively.

Without CC, I think Seth will go into "Super Seth" mode over the next 6 (7? 8? 9?) games. With the smaller lineup opening up space for him, it wouldn't surprise me if he averaged 20+ a game over the rest of the season.

It will be important for Bibbs or Robinson or Hill to step up and be the 3rd option. With the defense keyed in on Seth and LeDay, we'll need these other guys to keep the defense honest, or take advantage of the space.