The No. 15 Hokies cruised to another win. 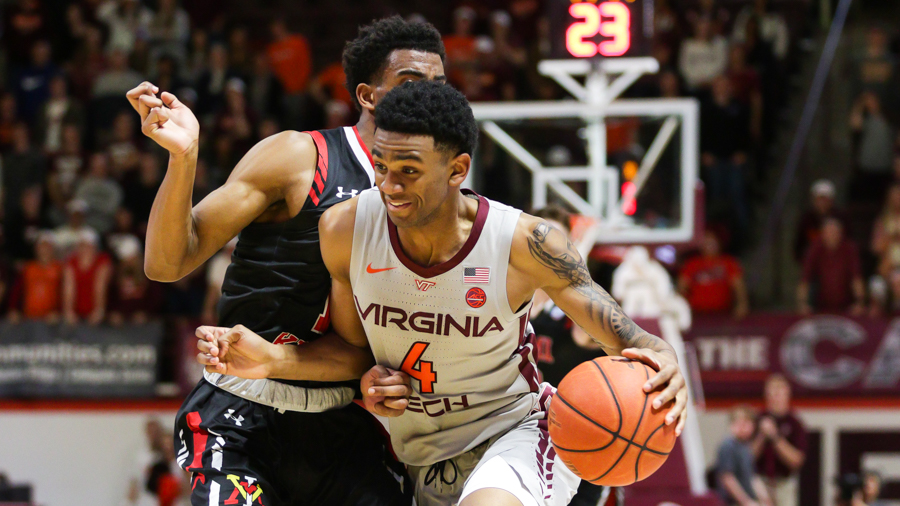 Virginia Tech returned to action on Wednesday evening and crushed VMI, 89-68. Buzzketball had all nine players score at least three points, and four players scored in double-digits. The Hokies moved to 7-1 on the season with the victory.

It was another beatdown of a lesser opponent in Cassell Coliseum. Virginia Tech only committed three turnovers through the first 28 minutes. Buzzketball shot 51% from the field and 46% from deep. The Hokies scored 26 points off of 15 Keydet turnovers. Clinical.

However, it wasn't a perfect performance. Sloppy execution marked the start of the first half and highlighted the end of the second.

"I thought we played really well in the first half," said Buzz Williams. "We only had two turnovers. I thought we started out in the second half well; what was it 14-0? And then there were two ATO [After Time Out] segments that we lost. We became sloppy offensively, had too many turnovers, gave up too many baskets in transition. Our grouping was messed up on purpose because Ahmed [Hill] fouled out, we were playing Ty [Outlaw] and P.J. [Horne] up top together. I could've called a timeout; I was trying to see if they could work through it, but yes we were sloppy during that segment."

Virginia Tech ended the game with 11 turnovers. That's a drastic contrast to only having three at the second half under-12 timeout. However, there are remedies to turnover woes.

"Staying serious," explained Nickeil Alexander-Walker. "Staying locked in. We prepare hard a lot. So I think we worked too hard to let that happen. I think sometimes it's just one of those few times where we actually got complacent. And took our foot off the gas pedal."

On a more positive note, every player on the stat sheet scored. Four Virginia Tech players scored in double figures. Ty Outlaw was one point away from a double-double. The Hokies once again showed they gasp might actually have some depth.

"Well, I don't know if we have a lot of depth," said Williams. "I think what we're trying to figure out is, who we have, how to best utilize them, and we need everybody playing for one another. I think we had 77% of our baskets assisted on Saturday. 19 out of 30, so 63%, were assisted tonight. 'Five' [Justin Robinson] and [Alexander-Walker], when they play as our primary ball handlers, when they force help quickly, it really helps Ahmed [Hill] and Ty [Outlaw]. I think that's why Ahmed and Ty were so good on Saturday. But I also think that Isaiah Wilkins is beginning to have a distinct role. He's learning how hard he has to play. He's beginning to practice at that same level. I'm encouraged by that. I think Jonathan Kabongo, the last two games, has made improvement and in between, he has practiced really well. We just got to, typical coach, have got to continue to take the next step."

P.J. Horne was a surprising bright spot. Horne went a perfect 6 for 6 from the floor for 12 points. He also grabbed five rebounds.

"It feels pretty good," said Horne "You know, we won the game, so you just got to get to the next thing."

Horne's success came by way of new wrinkles on the offensive end of the floor.

"We were trying new lineups," explained Robinson. "Trying to put P.J. on a guard, trying to put him in a ball screen. So we were trying to adapt to it. But overall, I think us just being ourselves and not overthinking one another and just playing as a team led us to the victory."

Buzzketball buried Central Connecticut State in an avalanche of three-pointers last Saturday. Tonight, the Hokies didn't seem to have that killer mindset.

These sleepy non-conference games seemingly drag along endlessly. ACC play is now on the horizon like a late Christmas present. However, 'gimme' games like tonight still provide a learning opportunity.

"What we have done the last two days is I've been referring to the groupings specific to a game," explained Williams. "So, at Ball State we played small ball, so when I wanted those guys in I would say 'Ball State group,' and against Central Connecticut we started as big as we could be – which still isn't big, it's small it's just our version of big – and then we started a different grouping tonight. So, I think to some degree we want to figure out the right groupings on both ends of the floor, and then some of the timeouts Coach (Dan Earl) and I were calling towards the end, we're just trying to work on special situations so that regardless of who's on the floor they get reps of that. We have four games left to go in December; Washington will be an outlier because every possession will be in zone. But a lot of what VMI was doing tonight defensively we have not played against, and those were good reps for us. We have to continue to improve on us, but when we get to play against teams that are unique, those reps become very important."

15:51, 8-6 VT Virginia Tech started slow. The Hokies gave up two easy layups and a fast break layup. VMI did a good job of trapping the ball in the corner when the Hokies have the ball. It's throwing off Buzzketball.

11:27, 16-10 VT Seven point lead for Virginia Tech. Doesn't feel great though. The Hokies struggled with finding their groove on the offensive end of the floor. Solid play on the defensive end has kept the game in the Hokies' control though. Oh, and the 0 turnovers so far is nice.

9:07, 25-13 VT Hokies are on a 15-3 run. That was fast. Horne and Alexander-Walker are leading the charge, with eight and seven points respectively.

5:41, 33-14 VT What a great possession by the Hokies. Numerous drives to the paint, plenty of paint touches, swinging the ball around the perimeter. All to result in a wide-open Robinson three. Williams promptly called a timeout. In the past, he's done so to congratulate the team. I expect that's what just happened there.

2:41, 36-19 VT Blackshear picks up his required 2nd foul of the first half. Comes on an offensive foul. The Hokies first turnover of the game.

15:29, 56-23 VT Virginia Tech is running away with this one. The Hokies have started the second half on a 14-2 run. It's another blowout of a lesser opponent.

11:58, 65-28 VT Under-12 timeout, and it's time to call this one. Virginia Tech has 3 turnovers so far. Even combined with the 9 from Central Connecticut State game, that still doesn't equal the 15 from the Penn State game. Huge improvement by the Hokies' offense.

11:14, 67-32 VT So much for that 'no turnovers' thing. The Keydets have gone into a full-court press and have forced two quick turnovers.

3:36, 80-59 VT Hokies are getting sloppy. They're up to nine turnovers and have given VMI some confidence. In no way do I think that the Keydets will win this game, but it's concerning to see a lack of effort. Virginia Tech swatted Central Connecticut State away last Saturday. They aren't doing that tonight.

Henry could you end each Buzketball article with a Landers Nolley status report?

I'd buy a free nolley t-shirt from TKP.

I understand what you were trying to do with the title but the word discharge always makes me dry heave.

I feel like there may be a story here...

I'm old, but I didn't think the new math was that different

Yeah, it's some new math.

In reality, NAW had just gotten fouled on a layup and was going to be shooting a free throw to make it a 7 point game after the media timeout.

Thanks for the write-up, Henry!

I didn't wind up paying too close of attention past 10m into the first half. This one was over by then. That, and the broadcasts are snooze-fests.. Audio seems kinda crappy. I don't find Mac and Allegretta (sp?) have very compelling stuff to say.

I agree, the radio broadcast is much better audio. Was caught late at work for the Central Connecticut game so I caught the first half on the radio and then was home for second half and was bored to tears by the banal banter.

To be fair, the poor guy doing the CC game was by himself. I think he did ok under those circumstances.

Didn't have a chance to watch that one live...How does that even happen? Even the local d3 colleges near me get a play-by-play and color guy for their games.

Even the high school team in my town has both during the local cable broadcasts. They even get have a retired coach lined up to fill in when one of the two regulars is sick. How does my small town have this shit figured out better than VT/ACC.

ESPN was scraping the bottom of the barrel with this crew. They didn't even run commercials during the breaks (not even for their flagship) or go to the canned halftime show. They just showed a camera shot of the court from the nosebleeds.

So if you are scraping the bottom of the barrel why not reach an agreement with ING Radio or whomever that the Radio crew will just be voiced over the video feed so you don't have to bother finding anyone extra. It would be so much better than all the ash and trash they use as fill ins.

You're my best friend.

That wasn't Allegretta, it was Bailey Angle. Allegretta is usually good with his stuff; Bailey is little more all over the place. Mac can be a bit of a snoozer thought, but can tell some good stories in person.

For those who asked about the title, from the thesaurus: DISMISS, eject, expell, throw out. It was a play on getting discharged from the military.

I'm not sure what it says that TKP pays for Mark (photography) and Henry (writer) to cover the game, Henry writes a solid report with a ton of details and quotes from Buzz, I stay up late to publish it, and the prime discussion was over the title. Sometimes this job really is not fun. ¯\_(ツ)_/¯

Not gonna lie it, did make me think of ejaculation lol. However, that being said I read and enjoyed the article.

I fail to see how that's a problem.

I thought I got this comment up yesterday, but must have misclicked submit and closed the window before it posted, but to me it was a play on discharging a spent magazine from a rifle, with VMI being a military school and all.

Yeah, I thought the title was really creative and being VMI, I was thinking about guns. And then there's the whole military status thing.

I feel really bad that we made this not fun for Joe.

This is where I'm at also; so long as it's verbal, can't say I like looking at gross stuff.

I am water/wastewater engineer, discharge goes to a dark, moist, and wet place...