Then his friends offered him a dried plant known as "Mary Jane" to smoke..... after a while he "discovered himself" asked his friends to call him Mahna Mahna (2/4) pic.twitter.com/FjQROcH5wx— Woodguy (@Woodguy55) September 24, 2018

After high school he chased his dream of making music. He found that smoking weed just wasn't enough and to help him play 3 hour sets he decided to try cocaine.... he became an Animal (3/4) pic.twitter.com/7VwZ8NBhrU— Woodguy (@Woodguy55) September 24, 2018

and finally when his band broke up Bernard fell into world of despair and methamphetamine where he's now just known as "Gritty" pic.twitter.com/LlwyC7XdIN— Woodguy (@Woodguy55) September 24, 2018

"petin stoey" anagrams to "petty noise", which is also what you get when you read this comment aloud.

EDIT: THAT IS A RUDE EDIT, HOKIEFIREMAN, AND YOU KNOW IT

No idea what you are talking about. I'm innocent.

Was looking for a fireman with an ax gif to cut you down for using this and instead I found this and have to use it.

And then I tried to play it off that it was Gritty's last name "orgin" as in this is the story or Gritty Orgin. Just trying to cover up for my typing/spelling errors.

The Orgin Story says his actual name is Bernard Gritowsky, though.

Gritty is the best thing to happen in sports in a long while. 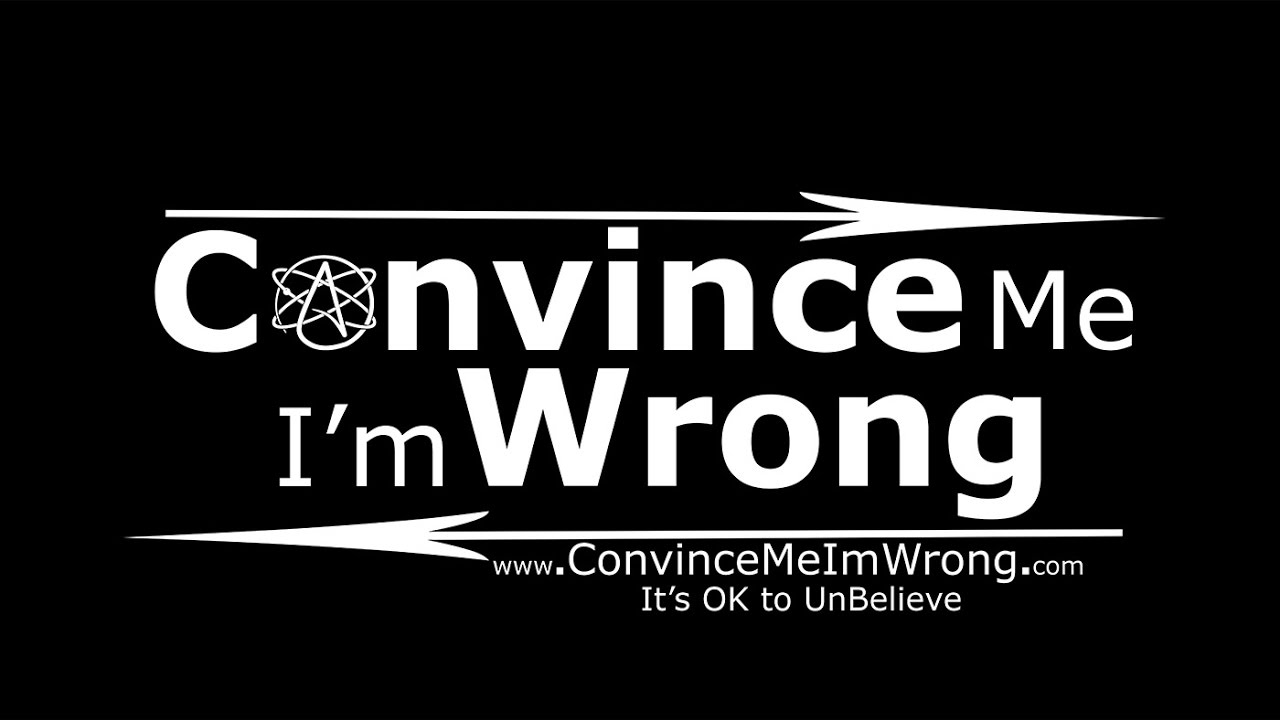 I'm all about not taking oneself too seriously. Outside of the Hokiebird, obviously, the Philly Phanatic and San Diego Chicken are the two best mascots in sports, primarily because the people inside the costume and the teams they represent don't give a damn what they do. Gritty is allll about that and then some. The damn googly eyes are freakin hilarious, and apparently it also releases smoke from under the helmet, as I saw on Good Morning America today. Its so over the top its perfect.

You forgot Jaxson De Ville. Made famous by a Tech Alum.

Sir Purr in Carolina used to be portrayed by a former Hokie Bird, though it might be the same person who went down the Jacksonville.

Curtis Dvorak Was there from 1996-2015 he is our local Hokie groups guest speaker this year.

The UCSC Banana Slug mascot is such a disappointment.

Gritty is awesome. Looks like an offspring of a Broad Street Bully, long hair, mangled beard, and no teeth. Phanatic is still the best and I hate the San Diego Chicken.

Nutsy is a pretty damn good mascot for the Flying Squirrels The wonky eyeballs sold me on it they dont move in the pictures I had seen at first but this, this makes it so much better

Those animated eyeballs are different than the stills. Hmmmm...

Even Gary Bettman couldn't be bothered to comment on Gritty when asked recently.

In Philly, we are all Gritty.

Because starting it with "Sh" wouldn't pass obscenity rules.

Hey guys - Is this the weeks' Hatin' on thread??

And he's getting his own beer...
https://www.thescore.com/nhl/news/1614171?utm_source=dlvr.it&utm_medium=twitter

I'll try anything, once.

For those that didnt see it.

And then theres this

I think those of us with brothers can confirm shooting each other with a T-shirt cannon qualifies as "Brotherly Love".

The Philly Union had their own new mascot as well. They had an "egg-hatching" at a museum or something or another. Not sure what the deal is with Philly and new mascots. Are the Eagles getting a new one, too? It's the other bad teams besides the Phillies trying to stay relevant in the city, because they figure ugly ass mascots will distract from the horrible product on the field/ice.

And in Gritty's case, it's completely working. Talk about so bad it's good.

Finally found something worse than roboduck

There's a decent chance I know the person who Gritty absorbed to gain life. If that's the case we're in for some pretty good shit going forward. Once saw that person put someone through a table with a fairly epic body slam while in full mascot suit 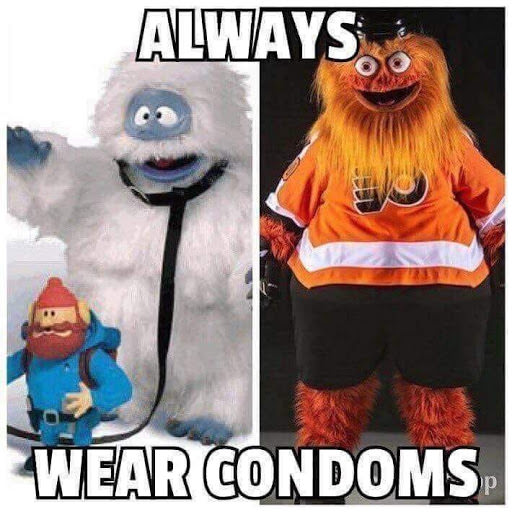 The Clemson tiger and Gritty have the same dealer: Dude has an impressive customer base

This is killing me

It's the jiggling eyes right? Having the eyes move like that definitely a great idea for Gritty.

Seriously yall. Flyers for the CUP!

This is the only thing more disturbing than Gritty's original head. I love it.

This was just sent to me. I can't wait to see how this holds up 😂👹 pic.twitter.com/WYlCRaOfa7— Taryn Hatcher (@TarynNBCS) October 18, 2018

Gritty received votes in 46 states this past Tuesday.

On one hand, I'm glad people are out voting. But it's disappointing to learn that people don't take it seriously

Well lots of people use write ins as just a strategy. Who they write down doesn't matter. I'd vote for Gritty out of pure hilarity

I mean, at the end of the day, sometimes it feels like your vote doesn't matter anyway (e.g. Being a republican in a very democrat area, being a democrat in a very republican area, preferring 3rd party candidates anywhere). Why not have some fun with it?

A mite on ice fought Gritty TWICE. Then got put in the sin bin

lol and then came out of the box, immediately dropped the gloves, and went at Gritty again

Someone is raising that kid right

This is the most Philly kid out there. Just keep him away from D Cell batteries, and Santa Claus if it's snowing out

When I was on the train through Philly on my way to see the Pitt game I saw some graffiti of Gritty smoking a blunt. It was probably the best thing I bore witness to that whole weekend.

Got get Gritty in while they can. Flyers are outside the playoffs and everything will be Harper focused soon...

game started 30 seconds ago and the Flyers are literally 1 point away from elimination. The attention is already on the Phils

He arrives in Season 5...in Philly.

Me when the Gritty thread gets bumped.

I had a good laugh at this

There was an explosion at a South Philly power plant last week. It was a huge explosion that woke people up on the Jersey side of the Delaware River. Just for context. 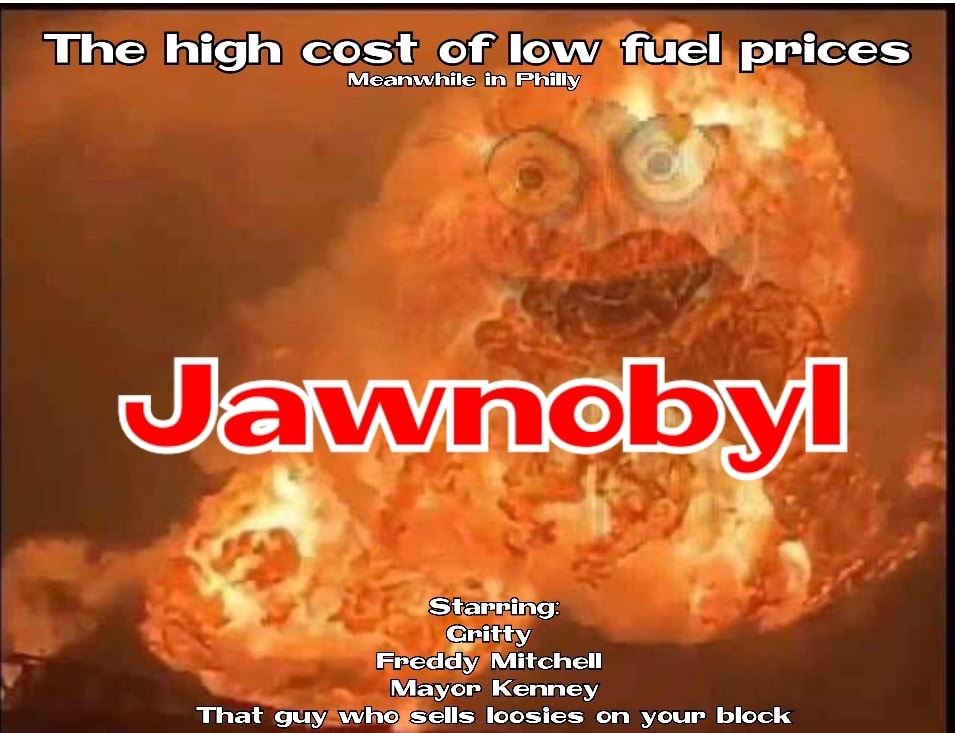 One year ago today, the world was introduced to @GrittyNHL.Things haven't been the same since 🤣 pic.twitter.com/PwPlVvTxTq— ESPN (@espn) September 24, 2019

Y'all's favorite mascot is all about equal opportunity in 2020. He said kids can see these hands too

"Philadelphia police say Gritty did not physically assault a teen during a photo session last year and charges will not be pursued." https://t.co/uPL2l3p3ZY— SeanFitz_Gerald (@SeanFitz_Gerald) February 3, 2020

Vindicated! Lil' bastard had it comin, too!

Lil' bastard had it comin, too!