In 81 days, one of our longest-running, most hated rivals comes to Lane for what (depending on realignment, scheduling, etc.) could be the last time in a long time. Consider this an early "Hatin' On..." thread.

Each year, we get this force-fed helping of Hurricane Helper, served up by anyone with contributor credentials to a blog. Some of the ACC media have more Ibis-wearing, rented-stadium players on the All-ACC team than any other school.

Which of these have we heard before:
(a) (Insert New Head Coach) understands the history of natty's and Miami culture
(b) Loaded with Florida five-stars (FFS)
(c) The Coastal is down this year so the path runs thru Miami.
(d) The QB is Heisman-level and will thrive under (insert OC here).
(e) The defense returns X starters and benefits from (insert DC here)'s scheme.

Athlon Sports picks Miami to win Coastal It's a new era at Miami with Mario Cristobal returning home and incoming investments in the program for needed facility and staff enhancements. After winning the offseason, the 'Canes can add to that momentum with a Coastal Division title in '22.

The U's defense allowed 28.4 ppg last season and couldn't tackle a 5th-grade flag football RB, but is only mentioned as an "area for improvement." The Ibis is a mascot, not the prototype LB you want from the S & C program.

Don't get me wrong - the ACC and VT need Miami to be better.
I (for one) just get sick and tired of everyone jumping on the Miami bandwagon.
That thing has more miles than a for-sale 2001 Hertz Chevy Impala.
Now that I think about it - 2001 is the last time Chevy's sedans and the U were both relevant...

We need to absolutely curb-stomp them in Lane on October 15th.
I hope we sell out, and introduce Tyler Van Dyke to the Terrordome...

They have a ton of talent on their team every year, they have had a run of bad coaching hires. I am not on their bandwagon but it is a matter of time before they get good again (Miami, FSU, Texas).

I think we will get good again under Pry, but Miami should always be good on paper.

I feel like FSU could be stretched out a little longer though. Maybe Norvell goes 7-5 the next two years then gets canned and they screw up the next hire. Maybe we could get another 8 years or so of failure from them, I'm all for it

Remember that ONE time when Miami won the Coastal and then got blasted 38-3 in the ACC Championship game? Good times.

Remember that one time Miami won an ACC Championship? Me neither

Miami also has the same number of Coastal Division championships as Duke and UVA.

I am merely 1 person and am tied for the amount of ACC ships they have.

I hate them more than ever for getting rid of the turnover chain. It was one of those gloriously obnoxious traditions that make college football special, and it was the most Miami thing ever. The fact that it spawned something even more ridiculous (seriously, Tennessee, a turnover trash can?!) only adds to its legend.

It was a thing that I hated how freaking tacky it was but also respected how unashamedly L ⅃ it was.

That Hurricane Helper ain't helping like it used to

I know we all like to joan on Miami on being "bak" but it is only a matter of time until they actually are. They recruit well enough where its eventually going to overcome bad coaching, but with Cristobal now heading up the team, I think they finally have a legit coach (and coaching staff) and is recruiting VERY well since he arrived.

At the end of the day, yes its fun making fun of them and watching them lose/choke, but it's better for us and ACC for Miami to be a good team.

It's only a matter of time

So far it's been roughly 20 years.

true... but I'd also look at the coaches they have had in last 20 years. recruiting has never been an issue for them

I hate Miami but I want them bak. Not a new version but the old version. Bring back the convicts. Blast Uncle Luke. Offend everyone.

Miami is a school that comes up in conference realignment, with the Hurricanes among the ACC's top programs and the conference's uncertain future. The Big Ten and SEC are seen as the two premier destinations in college athletics as things stand, but a report from Barry Jackson of the Miami Herald detailed that neither league has expressed interest in adding Miami.

"Three sources briefed by the UM administration said this week that neither the Southeastern Conference nor the Big 10 has offered membership to UM nor shown any serious interest in adding the Hurricanes," Jackson wrote.

Not that anyone was wondering, but Miami is very much bak in the ACC for the foreseeable future, with no interest from the B10 or SEC.

Yeah, but that report is a lot of hot air. After all it says that Miami is one of the ACC's top programs. We all know that isn't true.

The only time they have been better than average in their history is when they were cheating in a big way. Proven time and again. Those 80's teams were on roids and coke and no show classes and the early 2000's teams were paid by people like Shapiro and Chuck D. Proven 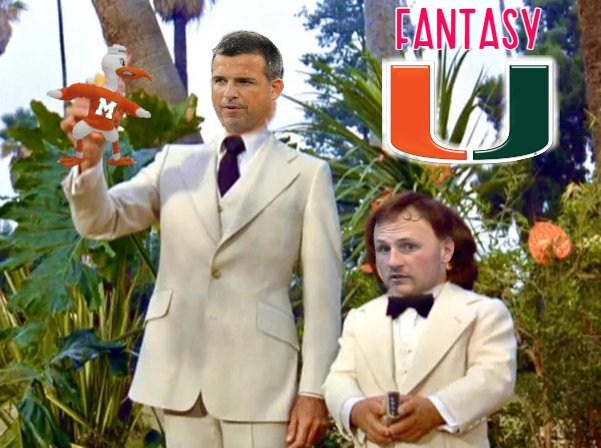 And I forgot about the ACC Media picks coming out today....

Anyone need a second helping of Hurricane Helper?
Because the media is hungry for it, apparently.
Let's not even talk about picking VT 5th in the Coastal.

It's the Fu Effect. He did so poorly with bringing talent in, and then poorly with what he had, that the media thinks VT sucks. And we did suck, a lot, under Fu. It really is tough to fault them for this but hopefully Pry proves them wrong. I don't think VT wins the Coastal this year but there's a reasonable path to being better than 5th.

I'm starting to subscribe to the Fu effect theory, now hearing players talking about how much better things are under the new staff. I don't think this is a rebuilding year. Fu conditioned us to think we are terrible and have no chance. We have to get out of this mindset as a fanbase. I mean he actually had things so bad that VT related media was just saying well we don't have the resources to compete so get used to this. That mindset needs to be eradicated. Bring it on. Hope we smack ODU by 40. Believing we have a chance is half the battle.

if by some miracle we finish with a winning record this season, it will mean that we can add gaslighting to the pile of CJF's sins

BC has a legitimate shot, GT is pretty out there. The Jackets hardly return anyone from last year's team, but based on their results maybe that's a good thing...

UVA over us, I love it, we always play way better with the underdog mentality. And the media is so shitty at predicting the ACC. Keep sleeping 😴😈

If anyone could accurately predict the ACC year in/out (at least the Coastal representative) could have made a pretty penny the last 15 years.

They'd be mental. As in mentalist.

I'd suspect them of time travel.

My conspiracy theory is that the lottery was created to weed out time travelers, that's why lottery winners have such bad endings after winning.

It's why sports betting was illegal

Some time police type shit? That's wild, I can get behind it

Has Miami announced it's joining the LIV Tour yet?

Selfishly, as someone that lives in Miami's market- i don't give a flying rat's ass if it's good for the ACC for Miami to be bak. It's not worth the sanity of us non-Miami fans down here to have to put up with the sudden re-emergence of all the "U" bullshit if they suddenly win more than 7 games in a year. I'd rather see LOLUVa be 9-2 or 10-1 and lose to us every year than Miami win a single game.

Let them get curb-stomped by everyone, for the rest of time.

Oh look, Miami got picked first in the Coastal like basically every other year that they've failed to live up to the invented hype. Wake me up when they're 6-6 and sitting at home in December during championship week.

Seriously, I do hope both VT and Miami can get back to being highly ranked teams so the matchups will mean something. I hate Miami but I hate them even more when there is truly something at stake in that game. The new schedule means we won't see them often, but that means I want the Hate Bowl to mean bragging rights for a few years at a time.

Reminds me of the year VT won 7 games, Beamer retired and we got a new coach. Unc Miami and Clemson picked in preseason polls and VT picked near the bottom. We didn't know how the new coach would actually do in year one. We weren't sure how much talent was being wasted at the time but came out and won the ACC coastal in Fuentes first year. Granted Beamer appeared to have much better talent evaluation *we think*, this will be proven after a year of adequate coaching and strength training if it was the chicken or the egg.

As I look into my Cristobal, I see that Miami still sucks and I hope they go 0-12.

Is Miami Bak Yet?

I dunno a couple of weeks ago they had like a 4 star commit every day for like a week straight.

Maybe they really bak this time.

Take heed 'cause I'm a lyrical poet
Miami's on the scene, just in case you didn't know it

I'm not sold on their whole team finally taking advantage of the talent they always have, but I am sold on Tyler Van Dyke which scares me. I think he was easily the best non-Pickett ACC QB from the moment he got the starting job through the end of the season.

I'm really happy he got a year he didn't play under his belt and will probably be off to the NFL after this season. I think a full 3 years of that guy would have been really bad for us and really good for Miami regaining dominance.