A closer look at some of the dead-ball offensive sets the Hokies excel at, and a preview of Virginia Tech's pivotal matchup against Virginia. 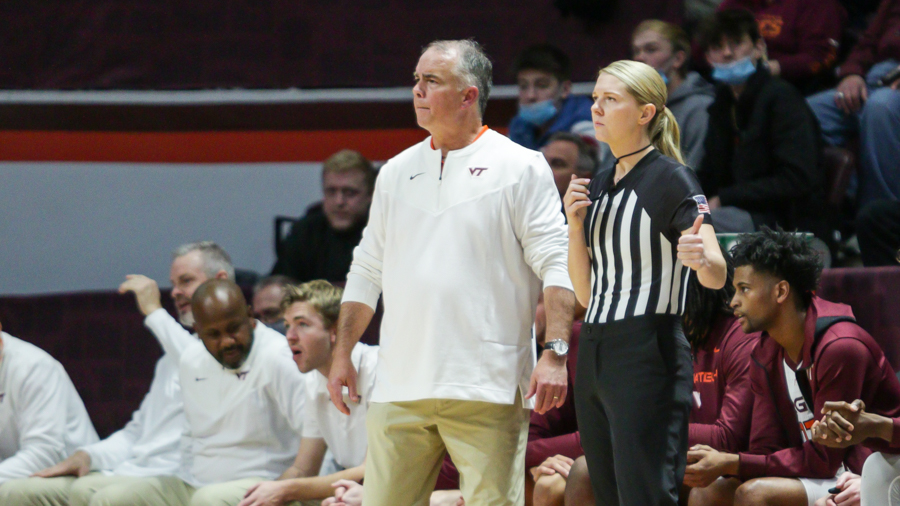 Virginia Tech enters a pivotal matchup with Virginia having played just one game in the past 21 days. With UVA at their lowest point in a decade and Tech still struggling for their first ACC win, something has to give in Charlottesville this evening.

Over the extended break, I had some time to reflect on the Hokies' season to this point. Although Tech's postseason chances are hanging in the balance, I still think this group has many redeeming qualities, starting with the way they structure their offensive sets.

Throughout his coaching career, Mike Young has made a living on creative ATO (after timeout) and out-of-bounds plays, which refer to any offensive action run out of a dead-ball situation. One such set came late in the second half against Duke, and was picked up by beloved color commentator Fran Fraschilla.

The Hokies are in a 1-4 low set, as there are four players close to the baseline. They run an elevator screen for Nahiem Alleyne, aptly named because the two bigs (Keve Aluma and Justyn Mutts) let Alleyne slide through and then close off the trailing defender like an elevator door closing. (The Golden State Warriors run this play a lot, as it's a great way to get open looks for Stephen Curry.) With so much congestions on the near corner, Hunter Cattoor is left isolated with Joey Baker (#13), and executes a back cut for an easy two after Baker loses track of him. (You may recall Tech running this exact play for Cattoor in their win over Virginia last year. Might we see it again tonight?)

I've been really impressed with Cattoor this season. He impacts the game in ways that don't always show up on the statsheet. He has the lowest possession rate (14.5%) among the nine players in Tech's rotation, meaning that he does not take many shots nor turn it over relative to the minutes he plays. The emergence of Sean Pedulla has been critical not just in giving the Hokies a scoring option off the bench but also because it allows Cattoor to play his natural position at the two guard where he can utilize his best asset: his ability to move off the ball. And because of his incredible shooting prowess, defenses have to pay him considerable attention.