The Hokies gained a commitment from a Palmetto State pass rusher. 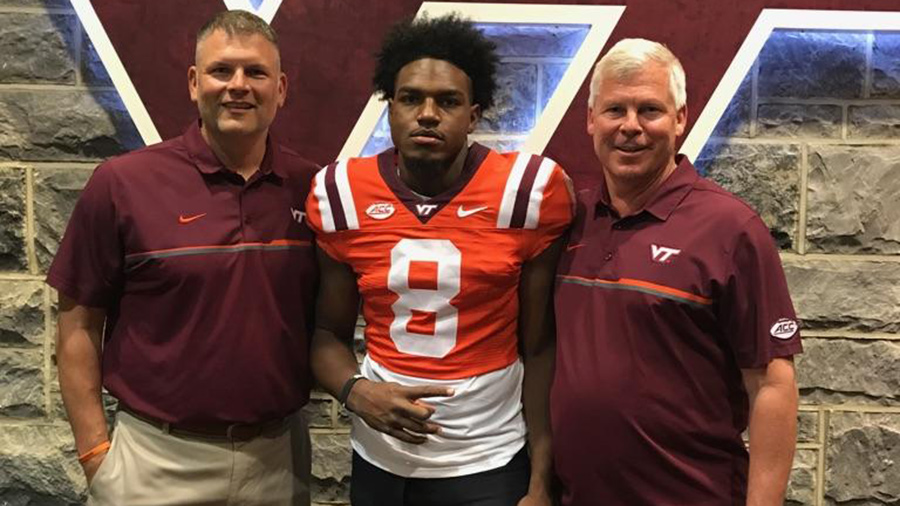 Eli Adams wanted to wait a tad longer before he made his college commitment.

Deep down however, he began to realize he had no reason to delay longer.

"Just the way I was feeling, I slept on it, prayed about it and talked about it with my family," Adams said. "I just wanted to commit, so I went ahead and did it."

"Really it came down between Virginia Tech and North Carolina State and Virginia Tech was just that place where I felt more comfortable," Adams elaborated. "Just with the coaches and there was a lot that went into it.

"Virginia Tech just won out on everything."

If there's one thing Adams knows, it's how to win out. He moved up to varsity his freshman season at South Pointe HS in Rock Hill, South Carolina and got some snaps as the Stallions took the Division II AAA state championship.

As a sophomore, he totaled 18 sacks as South Pointe won it all again. In his junior year, 10 more takedowns of the quarterback came. So did another title.

An accomplished winner and ferocious edge rusher, Adams is well versed on success.

"It taught me much about the guys, the guys next to you, hard work and what it really takes to win championships," he said. "It really comes down to a team effort, pushing the guys right beside you and getting the best out of everyone."

Adams held offers from South Carolina, Kansas State, Maryland among State and others. He's a speed rusher off the edge whose self-described strength is when he "tests the offensive lineman to see how fast he is," off the weak side.

The Stallions primarily run a 4-3 base defense but switch into a 3-4 in certain situations. On those occasions, Adams is given free rein in the open field. Pass coverage wasn't his biggest plus, but he's worked diligently at the craft in the past year.

That's a hallmark of the 17-year-old's personality.

Seeds for the latter got planted when his older brother played high school ball. As a middle school student, Adams began to pick apart tape with his sibling and father.

It's one of his favorite pastimes.

"I'm really a student of the game so I understand what the offense is doing," Adams said. "That's one thing that gives me an edge because I really study film.

"I really understand how the offense blocks, what they're trying to do to me and run away from me. It gives me an upper hand. I watch film Monday through Friday, I even watch some before the game. I try to learn a lot about the guy that's going to be blocking me. That's real important when it comes to the game ... Now that I fell in love with it, it comes easy to me. I just sit down and watch."

As for the weights, Adams admitted once he found the gym in high school, he took to it and maximized his time.

"As soon as I moved up to ninth grade I was lifting with the big guys," he said. "I came in strong and I naturally been big, been strong, and so (coach Strait Herron) told me to stay in the weight room. I stuck to it, I fell in love with the weight room. That's one thing I take pride in."

Adams enjoyed his rapport with his primary recruiter James Shibest. His voice also jumped at the mention of defensive coordinator Bud Foster, who wants to feature the quick-twitch athlete off the edge.

"That's my guy, right there. Me and coach Foster, we had a good connection," one of the newest Hokies said. "I really like what he's doing at Virginia Tech, the experience he has and the years he's been there. That's one thing that really made me choose Virginia Tech, too."

Unsure if he's a redshirt candidate or not, the No. 20 overall prospect in South Carolina per the 247Sports
Composite rankings and 3-star recruit is unfazed either way. He feels right at home in Blacksburg after a handful of visits.

His offer from Tech came little more than a month ago on May 7. It wasn't a school that originally stood out on his radar.

"Growing up, I knew the schools around here or the schools doing good at the time," he recalled. "It was during the recruiting process, coach (Shibest) came through the school and I liked his (approach). I knew I had to stick with it, I knew there was something about Virginia Tech. After they offered me a couple months later, I knew I had commit."

While Adams had little familiarity with the program prior to high school, a comparison Foster made to him will certainly ring a bell with orange and maroon supporters.

The longtime defensive coordinator offered up a former player of his at a similar size.

"He was just telling me that I remind him of a guy he coached at Virginia Tech, about the same size, 5-11, 6-foot, 230," Adams said. "That was one thing, too, that if coach can coach guys like that, I know that he can coach me."

Eight years ago, Foster spoke of that defender to the Daily Press, "I've been here 23 years and he's arguably the best player in college football in my time."

When asked what should excite fans about his arrival, Adams said: "I bring energy and that's one thing I love. I love the game of football. I've played it since I was five years old and just fell in love with everything. The games, the practices, I just love everything about it. That's something I bring to Virginia Tech. I want to add on to the energy." ... That energy is something the commit noticed about the Hokies' program ... "Personally, it's the energy that coach Fuente brought back. Coach Foster always has a great defense and now (Justin) Fuente coming in, there's just that energy. They're an ACC contender and I don't think a lot of people see that. People don't realize they were in the ACC championship against Clemson last year. The future is bright," he said ... Adams also spoke about his aims for improvement this year to go along with his work on coverage: "As an individual, I want to improve on just my weaknesses and stuff like that. As a team player, I just want to improve on helping guys around me get better. I know there are guys who look up to me and really want to learn from my experiences and what I did. Especially the defensive line because if all of us are better, we're going to get that fourth state championship." ... On his position and skillset, Adams said: "I say that I'm a big-bodied guy but I move like a skill guy. My first step is really dynamic coming off the ball. I got better using my hands and stuff like that, I've got the upper hand on offensive lineman. I play both sides (of the line), depending on the front and what the offense is doing. They usually put me to the weak side, just because like I said, I'm a fast guy and I can chase plays down from the back-side." ... Schools like East Carolina, Charlotte, Colorado State and Middle Tennessee also offered Adams. His size is likely why bigger schools chose not to extend a scholarship his way. He doesn't mind ... "Them saying I'm undersized that doesn't bother me. I know that's the reason some schools didn't offer me. Them thinking I didn't play linebacker enough at my size ... Either you believe in me or you don't," he said.

Two things that stood out; a high school junior that can bench 350?! and a comparison to Corey Moore...wow. Yes, please.

This kid is gonna destroy linemen

Damn can we at least wait till he is competing with other college level athletes before comparing him to one of the all time Hokie Greats? Good luck to you son, you are getting Huge expectations put on you...

I remember when Cols Colas was hyped as a faster version of Corey Moore.

After I read about his size when he committed, I immediately thought of Corey Moore. Yes, please, I'll take another one of those!

Reporter: "The French Quarters, the media, has this had any affect on you this week?"
Corey: "Well as you can tell, I'm very impressed."

If we ever do a GOAT Hokies gifs bracket, this one right here... hell, man. Just give this one the trophy.

The first flip wasn't too bad but they just go downhill from there. At least we know we won't lose Bud to the Olympics.

go downhill from there

Just ran into his mother and she stopped and asked if I was a VT fan, I always try to have something VT on. Real nice lady and she seems really high on VT and coach Fu's staff. She also said that Eli was enjoying it so far. She also mentioned that on the recruiticorn trail we were there the whole time but were honest the whole way through it. She said that was a big factor in the decision.

I for one am really looking forward to what he can do on the field and to root him on with his fellow hokies.

I'm glad you said hi to his mom.

Awesome info. Love the direction of this program.