Position by Position Analysis of the Hokies' Defensive Depth Chart

3,700-plus word breakdown of the Virginia Tech defense's starters and backups. 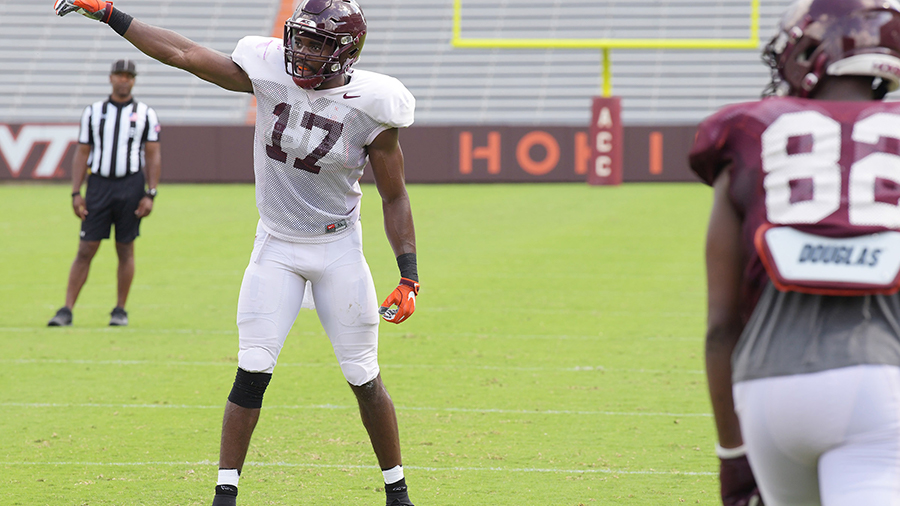 Cincinnati tailback Michael Warren II punctuated a miserable season of Virginia Tech defending the run with 166 yards and 2 touchdowns against the Hokies in the Military Bowl. The Hokies finished the season No. 113 in Rushing S&P+ defense and No. 106 in rushing defense (210.31 rushing yards per game). Bud Foster went into the off-season looking for answers, and he returns for his recently announced last ride. The 2019 recruiting cycle landed the largest haul of defensive tackles that I can recall. Safeties coach Tyrone Nix, who saw the productivity of the safety spot plummet under his watch, shipped back to the SEC. Justin Hamilton, a well-respected young coach who made the NFL as a safety after starting at Tech on both offense and defense at multiple positions, replaced Nix.

Hamilton represents an immediate upgrade, as I refuse to believe that rover Reggie Floyd and free safety Divine Deablo suddenly forgot how to fill the alley with an additional year's experience and suspect that Nix was part of the problem. Virginia Tech will be bigger up front with the influx of young defensive tackles. However, Virginia Tech will still field one of the youngest defenses in the ACC in 2019, and the news that Houshun Gaines was not on the fall roster means that the defensive end and corner positions, the two positions Foster has stated are the most important for his defense, will be comprised entirely of sophomores and freshmen.

Farley is entrenched as a starter at cornerback following a season plagued by poor tackling overshined some flashes of shutdown corner ability. The news that former JUCO 4-star Jeremy Webb (No. 2, R-JR, 6-4, 205) was cleared to practice puts some doubt about my prediction for Waller to start. However, Webb is returning from two Achilles surgeries and it will be really tough for him to regain his quickness and explosiveness. Waller has the length and ball skills to be a playmaker at corner, although his lack of closing speed caused him to be beaten over the top in a couple of cameos last season. The only returning senior on the Hokies defense, Reggie Floyd, praised Waller at ACC Media Days.

"He has that dawg mentality," Floyd said. "He's like GStro (Greg Stroman). Gstro wasn't the biggest, but he would always attack you no matter what."

If Waller can improve his ability to turn and run, I love his ball hawking skills opposite of Farley. Run support for both will continue to be worrisome until there is film showing the pair are more reliable putting backs on the ground.

JoVonn Quillen (No. 26, SR, 6-0, 188) provides a strong tackling, reliable veteran option if Waller or Farley do not take that next step. I would make the argument that Quillen was Virginia Tech's most reliable corner at the end of the season. He is adequate and safe playing in off coverage, but he isn't someone who can hold up for long stretches in man-to-man. He gives Foster a safety blanket to open the season.

Armani Chatman (No. 27, R-FR, 5-11, 195) provided reliable coverage in the spring game and looked like he could be a future starter. If he ends up beating out Waller, I would not be shocked. At the present, I don't have enough of a sample size to make that prediction comfortably. I would give the edge to Waller because he looked a little stronger in run support and has more in-game experience. Nadir Thompson (No. 12, R-FR, 5-10, 188) played three games in 2018, mostly on special teams and missed the remainder of the season and the spring game with injuries. His high school film showed dynamic speed and explosiveness, however there isn't any film to show what he can do at cornerback. It's not unthinkable for any of these options to align opposite Farley against Boston College,and not retain the job through the season.