Doughnuts in Downtown ATL: Film Review of the Hokies' Demolition of Georgia Tech

3,200 word, 10-play analysis of Virginia Tech's pressure/coverage strategy, offensive misdirection evolution and the whooping in the trenches, all with a slight eye to Pitt and Virginia. 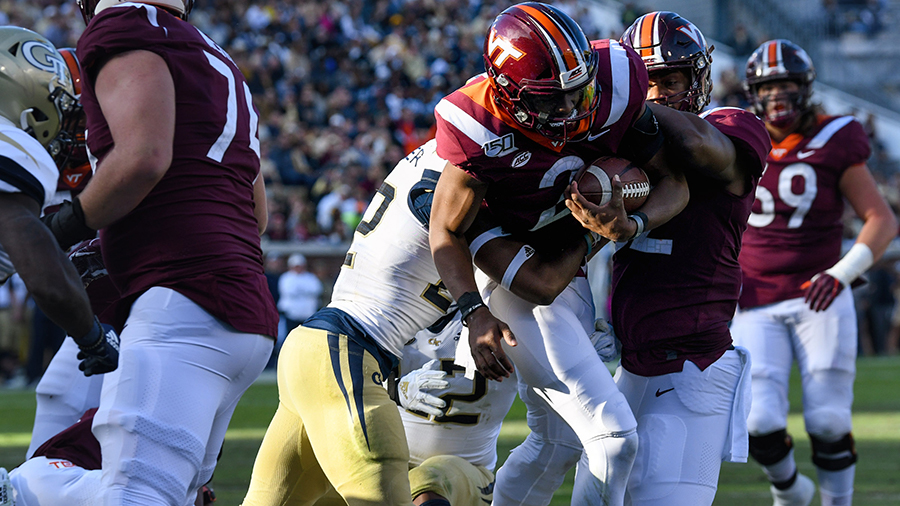 Virginia Tech's 45-0 spanking of long-time tormentor Georgia Tech was its most complete performance of the season. The Hokies' game plan, which applied pressure defensively and utilized misdirection to take advantage of Georgia Tech's excellent pursuit offensively, completely stymied the Yellow Jackets which had put scares into Pitt and UVA in the preceding weeks.

Perhaps more exciting were the results of the eye test. Virginia Tech looked confident. The Hokies played fast and aggressive, physically controlled both lines of scrimmage, and looked more athletic in space. While the enthusiasm was effusive, the Hokies' overall demeanor appeared that they expected to dominate. Yet, the attention to detail and execution was there at a level that I am not accustomed to seeing from this program in quite some time. Now, from the depths of despair following the primetime drubbing against Duke, Virginia Tech is positioned to steal a Coastal Division title if they can deliver similar efforts against Pitt and Virginia.

Mixing Up Coverages behind Pressure

While the narrative around Georgia Tech focuses on their youth and the transition from a spread flexbone option offense to a more contemporary spread, the Yellow Jackets had some offensive weapons. Particularly against Virginia, the Yellow Jackets were able to generate big plays in the passing game, while quarterback James Graham showcased game breaking escapability. I didn't expect Georgia Tech to be a pushover even with their limitations.

Against that challenge, the defense took a significant leap forward. Graham's ability to run was completely rendered meaningless (21 yards) through a variety of six-man wall pressures. Georgia Tech's speed receivers were not able to get open deep even when matched up with Virginia Tech's safeties. The Hokies played fast. All over the field, the Hokies outnumbered the Yellow Jackets around the ball. Most importantly, Bud Foster was able to use a variety of coverages instead of relying so heavily on Cover 1 as Tech did against Wake Forest.

Disguising coverages made Graham hesitant, and Foster utilized that approach early on. Watch this 2nd-and-14 from the Yellow Jackets' opening drive. Whip Chamarri Conner (No. 22) seemingly manned up on slot receiver Ahmarean Brown (No. 10), who Foster noted was "the fastest guy in the league". Corner Caleb Farley (No. 3) seemingly manned up against No. 12, split end Adonicas Sanders (No. 12). Free safety Divine Deablo (No. 17) crept up, with responsibility to either man up against tight end Tyler Davis (No. 9), or fill the alley.

At the snap, the look completely changes for Graham. Farley and Deablo both drop deep. Brown runs a vertical route and Deablo brackets him inside and Farley on the outside. Graham sees Farley appearing to give too much cushion to Sanders on the out route and throws the route. Conner rotates out to the flat and Graham never sees. If Conner gets to the angle, it's a pick six waiting to happen. Conner was a little more conservative and runs to the receiver to force him out of bounds well short of the first down marker. The seed was planted, and Graham rarely made decisive throws the rest of the day.

Conner's speed and heavy shoulder was heavily leveraged in Foster's pressure concepts. Similar to how Foster deployed Mook Reynolds in the 2016 Belk Bowl, Conner spent much of the game lining up in the slot and blitzing off the edge. Foster used a variety of concepts which varied from the defensive line slanting to the boundary and the boundary defensive end dropping off into the flat, all the way to full blown six- and seven-man pressures.

To combat this 2nd-and-1, Foster called a seven-man pressure.