A Tragedy in Three Acts: The End of the Commonwealth Cup Streak

5,000-plus word, 26-play film analysis of how the Cavaliers snapped the Hokies' 15-game winning streak. 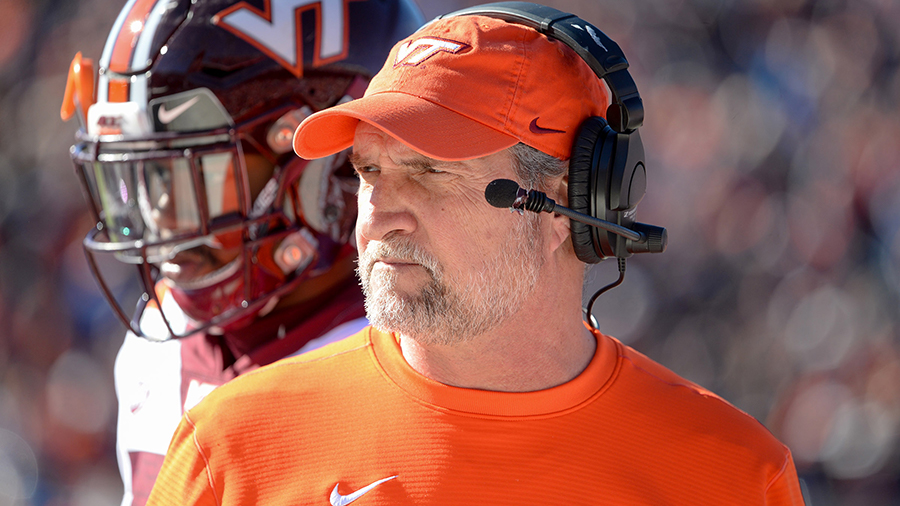 This is a lede I didn't think I would have to write this year. Virginia finally broke the Hokies' 15-year run of dominance in the Commonwealth Cup rivalry. To salt the wound, while the Cavaliers benefitted from performances which will become UVA lore, the most upsetting part of the game is that Virginia Tech had Hoos on the brink of giving up hope. The outcome left Hokie Nation searching for answers. The offensive game plan seemed to uncreatively try to build on previous weeks' successes, even though that plan didn't effectively exploit the weak UVA secondary. The offensive line appeared slow and confused against UVA's exotic front. And, perhaps most frustratingly, Bud Foster didn't get to cap his career with a win in Charlottesville after his defense played an incredibly undisciplined first quarter, and then finished in the fourth by conceding huge chunks of yardage with soft coverage.

The loss has eradicated much of the good will Tech built AD (after the Duke debacle). Now once again the program is surrounded by questions and some angry fans. How does Fuente replace Foster without suffering the same kind of agonizing transition that Georgia Tech faced replacing Paul Johnson's flexbone. If Fuente procures a defensive coordinator who runs a similar scheme, how can the program address the major weaknesses with edge pressure and safety play that have plagued the Hokies defensively.

While major change is guaranteed on defense, the offense was as mercurial as the offensive coordinator has been silent following games. Brad Cornelsen found magic with Hendon Hooker and his ability to run a play-action, read option oriented offense. However, UVA exposed Hooker's inability to win the game from the pocket, and you can bet ACC opponents will try and copy that blueprint next season. What changes can Fuente make? Does Fuente have the will to replace one of his best friends as the offensive coordinator? How much impact will Jerry Kill have on those decisions? And, how can the Hokies put dynamic people in place in time to address the needs currently unmet with this recruiting class? Much like the mood in Blacksburg, my crystal ball is dark and cloudy.

Unlike predicting the future, the film study told a very clear story. Virginia Tech was not well prepared from a game plan standpoint to attack UVA's weaknesses. The game played out as three distinct acts, like a play, not un-ironic given that I had to watch a performance of Jacob Marley's Christmas Carol at the Barter Theater following the miserable afternoon on the couch. UVA dominated the opening third of the game. The Hokies made some adjustments that swung the momentum. Finally, UVA found two keys which the Hokies couldn't respond to, and those broke the Commonwealth Curse for the Cavaliers.

As I noted in my game preview, there were four absolute certainties about the UVA game plan. Bryce Perkins was the most dangerous run threat. Perkins and the passing game excel at short, quick passes, and with Tech's troubled history this season of covering slot receivers, defending Joe Reed would be of paramount importance. UVA was going to use slants and stunts to get their defensive tackles moving against the Hokies' slower and less experienced offensive line, while activating edge defenders Charles Snowden and Noah Taylor off the edge. UVA's secondary was completely depleted, and the Cavaliers were going to use conservative coverage paired with mixing up looks to try and slow down Hendon Hooker's decision making in the face of an intense pass rush.

None of these things were a surprise. Yet, in the first third of the football game, Tech looked completely unprepared to deal with any of these realities. Virginia Tech had several third-and-long change of possession opportunities on UVA's first two scoring drives. After three consecutive weeks of using five- and six-man pressures and tighter coverage, Foster reverted to a soft zone coverage.

Tech covers against the above 3rd-and-14 with a Cover 3 zone. Jermaine Waller (No. 28) accounts for the deep zone outside of the hash on the field side. Divine Deablo (No. 17) drops into the deep middle, and Armani Chatman (No. 27) plays outside of the deep hash to the boundary. Underneath, Chamarri Conner (No. 22) has the field flat. Rayshard Ashby (No. 25) has to take away any throw that breaks inside underneath Deablo. Dax Hollifield (No. 4) has the boundary flat.

There was a spy on the play. Rover Reggie Floyd (No. 1) spies quarterback Bryce Perkins (No. 3) on the play. Even though boundary receiver Hasise Dubois (No. 8) runs vertically, Floyd's heels remain firm and his eyes are in the backfield.

Unfortunately, this design leaves Floyd completely alone in the middle of the field. Deablo, Waller, and Chatman all run deeper than the deepest receiver in their zone. Ashby has his back to the play to undercut the vertical route from the field slot WR, and Conner and Hollifield are too far to help from their zone in the flat. Floyd was by himself.

The designed quarterback draw was the perfect offensive call. Tanner Cowley (No. 44) and Wayne Taulapapa (No. 21) align in the backfield in a max protect look. This should have been an automatic check for the defense to abandon the deep zone, as Cowley and Taulapapa are not vertical or YAC threats. However, both are strong blockers. The Hokies don't check. Right guard Chris Glaser (No. 69) and center Olusegun Oluwatimi (No. 55) double defensive tackle DaShawn Crawford (No. 36) to the outside. When Crawford loops outside, Glaser picks up defensive end Tyjuan Garbutt (No. 45) who rips back to the inside on the stunt. Left guard Ryan Nelson (No. 54) invites defensive tackle Jarrod Hewitt (No. 5) up the field to Nelson's left shoulder. Hewitt faces a single blocker and should stay square to Nelson, then drive him into the hole against a run threat quarterback. Instead, Hewitt tries to speed rush outside. The gap between Garbutt and Hewitt was huge, and it left the electric Perkins and two lead blockers alone against Floyd. Floyd incorrectly tries to run around Cowley instead of taking an angle to get between Perkins and the marker. None of the other defenders can get there to stop the first down. The defense missed a huge opportunity to sustain early momentum, and it wouldn't be the last time in the first quarter. This is an inopportune play call given the tendency associated with the formation, a failure by the lack of a defensive audible, and a poor job by Hewitt, Garbutt, and Floyd to not clog the lane long enough for help to arrive.

The defense, sparked by pass break ups by Conner and Waller (who played outstanding), got the Hokies in another change of possession situation. Against a trips look to the field, Foster called a coverage which featured six defenders covering four receivers. This pulled Ashby out of the middle of the field to cover Joe Reed (No. 2) in the flat.