Beaten to the Punch: Hokies Fall Short against Wildcats in Foster's Swan Song

Kentucky came out swinging and knocked out Virginia Tech late. 15-play, 3,700-word film review of Tech's run game strategy, the poor perimeter blocking that derailed it, Hooker's opportunity to grow in 2020, and the ugly of gap fits. 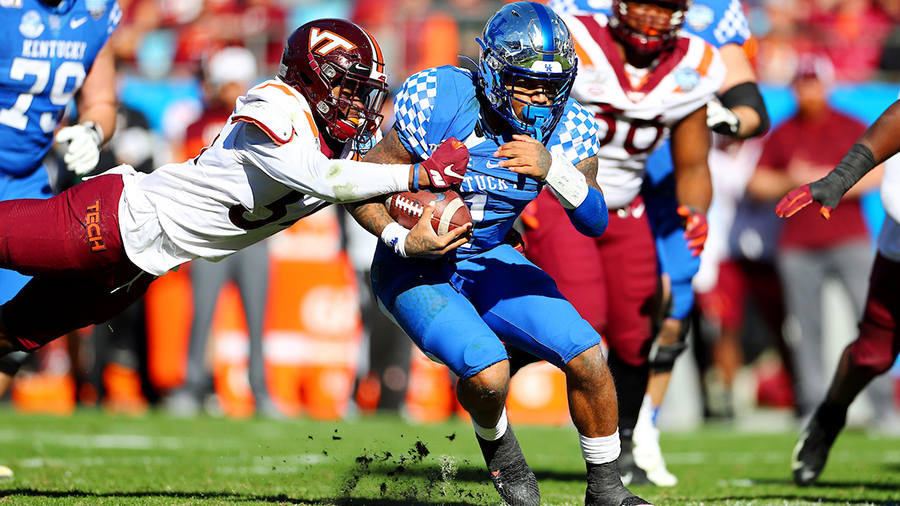 I made the trip to Charlotte to say goodbye to a legend. After watching Bud Foster coordinate the Virginia Tech defense from my last year of high school through eight years of writing this column, merely watching the tape of his design has been a football education for me, of which I am sure I still have a ton to learn. Unfortunately in his final outing with the Hokies, Foster received a punch in the gut when Josh Ali slipped behind Armani Chatman to end his storied tenure with a foul-tasting loss. Kentucky completely manhandled Tech's front-seven on most snaps, and when they didn't, the Hokies suffered a multitude of mental errors. In turn, the Wildcats turned the ball over enough times to give the Hokies potential opportunities for a victory.

Meanwhile, Tech's offensive line and Deshawn McClease turned in a dominant performance and gashed the Wildcats with big run after big run. However, the Hokies couldn't finish drives with touchdowns when the defense got stops. Poor skill position blocking and some brutal drops also put the defense in a tenuous position. Ultimately, a six-point fourth quarter lead wasn't enough to overcome Kentucky, a middle of the pack SEC school. With Foster riding off into retirement, the reality of Tech's current middling stature in college football has 2020 off to a lousy start for Hokie Nation.

The Good: The Offensive Game Plan and Running the Football

Running game success hinged on skill position blocking. When the Hokies received adequate blocking on the edge, they ripped off big gains. When the skill personnel was outmuscled by Kentucky's secondary, even good play design made Cornelsen look like a boob.

On the above five-wide inverted veer, Keshawn King (No. 35) aligns in the boundary slot and jet motions toward the field-side. Kentucky's d-line was immobile. Had Hooker kept, then he'd follow Lecitus Smith (No. 54) off right tackle for a nice gain. Instead, he hands off to King. The blockers to the outside account for three defenders. Meanwhile, the quarterback dive fake freezes weakside linebacker Jamin Davis (No. 44). This leaves King one-on-one against strong safety Jordan Griffin (No. 3).

Tayvion Robinson (No. 83) seals the pursuit of middle linebacker Kash Daniel (No. 56) to the inside. Dalton Keene (No. 29) keeps his hat on strongside linebacker Jamar Watson (No. 31) long enough which allows King to get to the edge. Tré Turner (No. 11) option stalks cornerback Cedrick Dort Jr. (No. 27) into the sideline. King runs right through Griffin's arm tackle. Had Smith even bumped Davis, who completely abandoned any dive responsibility for Hooker immediately, this probably goes for a long touchdown.

Even average receiver blocking popped some big runs. On this 1st-and-10, Tech ripped off 37 yards via an outside zone off the left side from the pistol formation.

Keene (No. 29) drives boundary edge linebacker Jordan Wright (No. 15) almost into the sideline. Left tackle Christian Darrisaw (No. 77) and Smith (No. 54) combo DE Calvin Taylor (No. 91), and then Darrisaw climbs to the second-level to seal weakside linebacker DeAndre Square (No. 17) to the middle of the field. McClease should have a huge hole.

Damon Hazelton (No. 14) releases inside and cut off No. 29 boundary safety Yusuf Corker (No. 29). Corker flies up in run support, but seemingly focuses more on taking on Hazelton's block than attacking McClease. Hazelton pulls up short and then knocks Corker down as Corker adjusts to McClease flying inside.

Unfortunately, the skill position blocking ranged from below average to deplorable, especially early in the game. Watch this 9-yard gain off a counter trey.