Sprinting off the Edge: Justus Reed Brings "Get Off" to the Hokies' D-Line 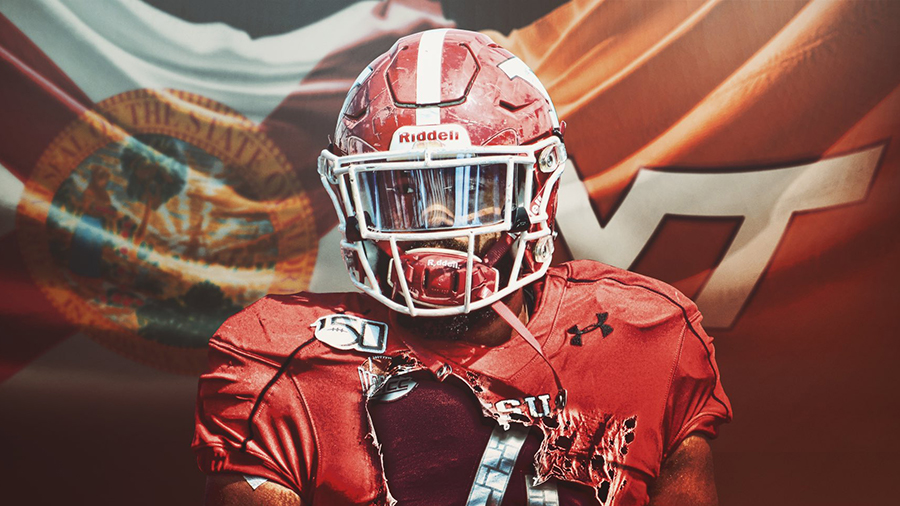 Grad transfer defensive end Justus Reed stands as perhaps the Hokies' most immediately impactful off-season addition. Reed's circuitous journey to Blacksburg began with the Florida Gators. Following his redshirt sophomore season, Reed transferred to Youngstown State, where after an extra medical redshirt, he delivered a huge season in 2019. His 12.5 sacks and 19.0 tackles for loss totals more than what all of Tech's defensive ends accounted for last season. He received a rare 7th year of eligibility from the NCAA, and ultimately opted for Virginia Tech over Florida State and Boston College among others. At 6'3, 270 pounds, Reed is massive by Hokies' defensive end standards.

While his size and statistics are eye grabbers, the film shows how Reed fits into new defensive line coach Bill Teerlinck's scheme. As I plan to detail in a future article, Teerlinck descends from his father's — legendary defensive line coach John Teerlinck — methodology of attacking up the field and disrupting the play. Teerlinck and assistant Darryl Tapp sold their vision to Reed. "They embody exactly what I want to do," Reed noted in February. "I want to have the career that they're at. Just people that are good at what they do and love what they do. Learning from someone who's been there before is huge."

Teerlinck prioritizes get off — reaction speed to the ball snapping and first step forward. Reed brings a great first step, and leg drive off the edge. Despite playing FCS football, Reed has big time Power Five edge speed, and looks more explosive than any of the returning Hokies' defensive linemen. Reed also brings size at the position that the Hokies haven't showcased since Bud Foster started running the defense. Even the handful of defensive ends who have been close to Reed's size (Corey Marshall and Jim Davis) didn't have the long wingspan and refined rush moves that Reed's film demonstrates. If Teerlinck and Tapp can showcase Reed where he gets drafted by the NFL, it makes Virginia Tech a much more attractive destination for NFL-sized edge players.

On passing downs, Reed (No. 4) often used a sprinter's stance, with his butt high and most of his weight on his hand.

Reed's first step almost immediately puts the offensive tackle at a disadvantage. As the right tackle turns his pads to the sideline, he realizes he was beat. He tries to lean into Reed to maintain contact. Reed wipes off his hand and blows around the edge as the tackle's feet stop. I love the bend back into the quarterback. The tackle was totally outmatched.

On top of his speed, Reed has the balance to change direction at full speed and execute sharp pass rush moves.