14-play film breakdown of the Wolfpack offensive and defensive schemes, with an analysis of how the Hokies match up. 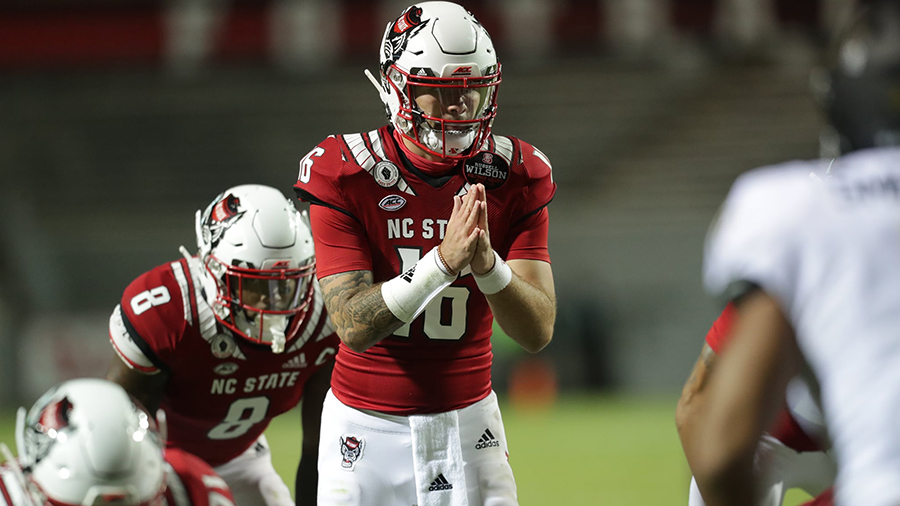 After an offseason for the history books, Virginia Tech finally seems set to begin its 2020 football season on Saturday night. Pending an impromptu COVID-cancelation, the Hokies face the NC State Wolfpack, a rare opponent thanks to the ACC's uneven scheduling system. The Wolfpack finished 4-8 in 2019. Injuries and an ineffective passing attack, paired with one of the worst defenses prompted head coach Dave Doeren to look outside his coaching family to straighten out his program. Doeren brought in former Texas offensive coordinator Tim Beck to revitalize the NC State offense. Beck paid early dividends as the Wolfpack put up 45 points in their season opening victory against Wake Forest.

One Cut and Go: Breaking Down the NC State Offense

Beck had some pieces to work with in his new offense. The Wolfpack returned three excellent tailbacks and incumbent QB1 Devin Leary (No. 13, R-SO, 6-2, 212). However, until the Wolfpack took the field against Wake Forest, Beck's formula for improving the offense was a mystery.

The surprises started early. Bailey Hockman (No. 16, R-JR, 6-2, 200) received the unexpected start behind center because Leary missed an extended amount of practice due to a COVID quarantine.

"[Leary] was not there, had some rust," said Doeren. "Really just kind of a victim of circumstance, to be honest. Tried to get him back for the game. He's practicing, getting better. But 20 days, however many practices that was, just didn't feel like he was sharp enough."

Hockman, a relatively mobile quarterback, transferred from Florida State and started a pair of games for NC State last season. Meanwhile, former super recruit Ricky Person Jr. (No. 8, JR, 6-1, 215) lived up to his 4-star (247Sports Composite 0.9502) billing. Person started over the Wolfpack's leading returning rushers, Zonovan Knight (No. 7, SO, 5-11, 206) and Jordan Houston (No. 20, SO 5-10, 190). All three running backs were heavily featured throughout the game. Person and Knight both nearly hit the century mark rushing, 99 and 97 yards, respectively, while Houston was targeted in the passing game and received most of the fourth quarter carries as NC State drained the clock.

The Wolfpack also spent the vast majority of the game using fast tempo and no huddle. Wake Forest struggled to adapt early, but the Wolfpack defense felt the effect of the fast pace and quick change situations late in the game.

NC State's offense is heavily driven by the zone running game. NC State disguises the zone by showing a ton of different alignments pre-snap, but the vast majority of the running game is zone right and zone left. In the outside zone, the running backs angle to the sideline and plant to cut back. The NC State offensive line did a magnificent job of caving in the backside pursuit of the Wake Forest defense to open up cutback lanes.

On this first quarter run, we see both NC State's effort to disguise any pre-snap indicators of inside or outside zone and their ability to open the cutback lane.

Person aligns slightly offset behind Hockman which typically indicates an inside run. At the snap, Person changes his angle and he almost faces the sideline at the mesh point before he takes off outside.

That creates a huge gap between Williams (on the ground) and the next defender on the interior. Person patiently takes a handful of steps to the sideline and allows the gap of the defensive interior to widen. Once it does, Person cuts back into the hole. The blockers stay engaged and Person gains 33 yards.

The physicality and mobility of NC State's offensive line stood out to me. The strength up front mixed with fast tempo made it difficult for Wake Forest to adjust their defensive scheme. The Demon Deacons often played a Cover 3 soft zone with limited defenders in the box, especially against four wide receiver-one back personnel groups. The Wolfpack offensive line absolutely dominated in the box, especially when they had the numbers advantage. Check out this touchdown run.