By the (Advanced) Numbers: Battle of Lines at Heinz

The Hokies must limit tackles for loss to stand a chance of winning against the Panthers.

Well, 4-4 is a tough pill to swallow, especially for what was supposed to be the first really good Virginia Tech team in years. There's no way to sugarcoat a .500 record eight games into the season, and even the most optimistic fans must surely be disappointed with that result.

One of the most valuable aspects of analytics is they allow us to go deeper than W-L to better evaluate how good a team really is and what should be expected moving forward. While wins and losses may paint a portrait of what a team has done to date, efficiency, turnover luck, opponent adjustments, and other factors help determine what might to expect moving forward. So not to excuse four losses — especially when poor coaching decisions and ill-timed, unnecessary penalties deserve part of the blame — but let me pick everyone's head up for a minute.

According to Brian Fremeau, only UNC and Louisville beat Virginia Tech in yards per play and only UNC gained a higher percentage of available yards. Bill Connelly doesn't share his full data, but he indicated on Twitter that both Liberty and Miami had post-game win expectancy under 50% against the Hokies. The teamrankings.com luck ranking has Liberty and Miami as the top two luckiest teams in the country. Virginia Tech ranks 113th. The Hokies' SP+ rating went up after the Miami loss.

In short, the results to date do not reflect the quality of Virginia Tech.

So given that, should 4-4 Virginia Tech be an even matchup against 4-4 Pittsburgh or do their underlying metrics suggest not? Will home field advantage tip the scales in the Panthers' favor? Did the school set a hard limit on the number of fans in attendance, or deem it not really necessary because typical Heinz Field attendance keeps fans well distanced?

Virginia Tech is currently 4-4. The actual and predicted score difference and odds of winning each game are: 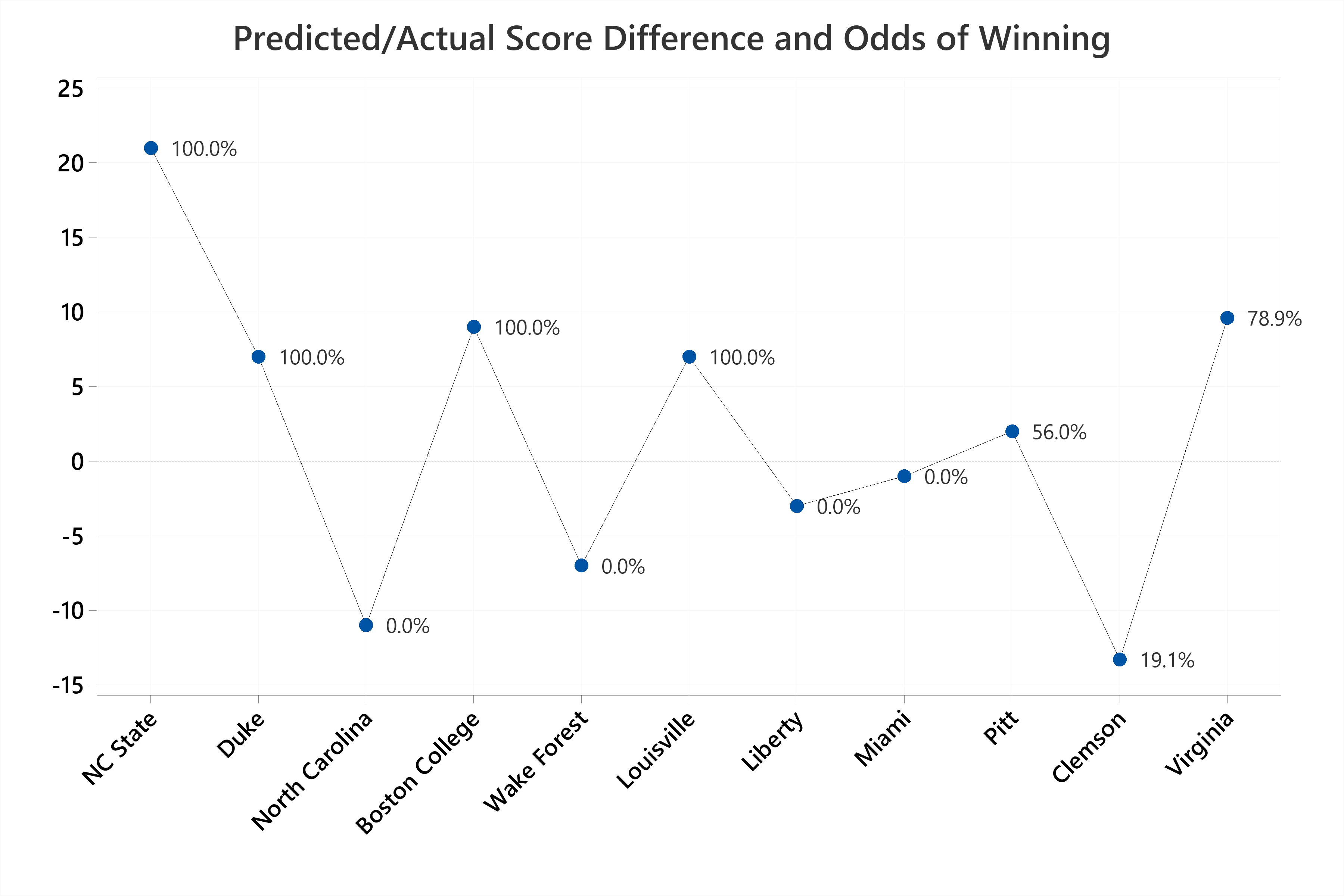 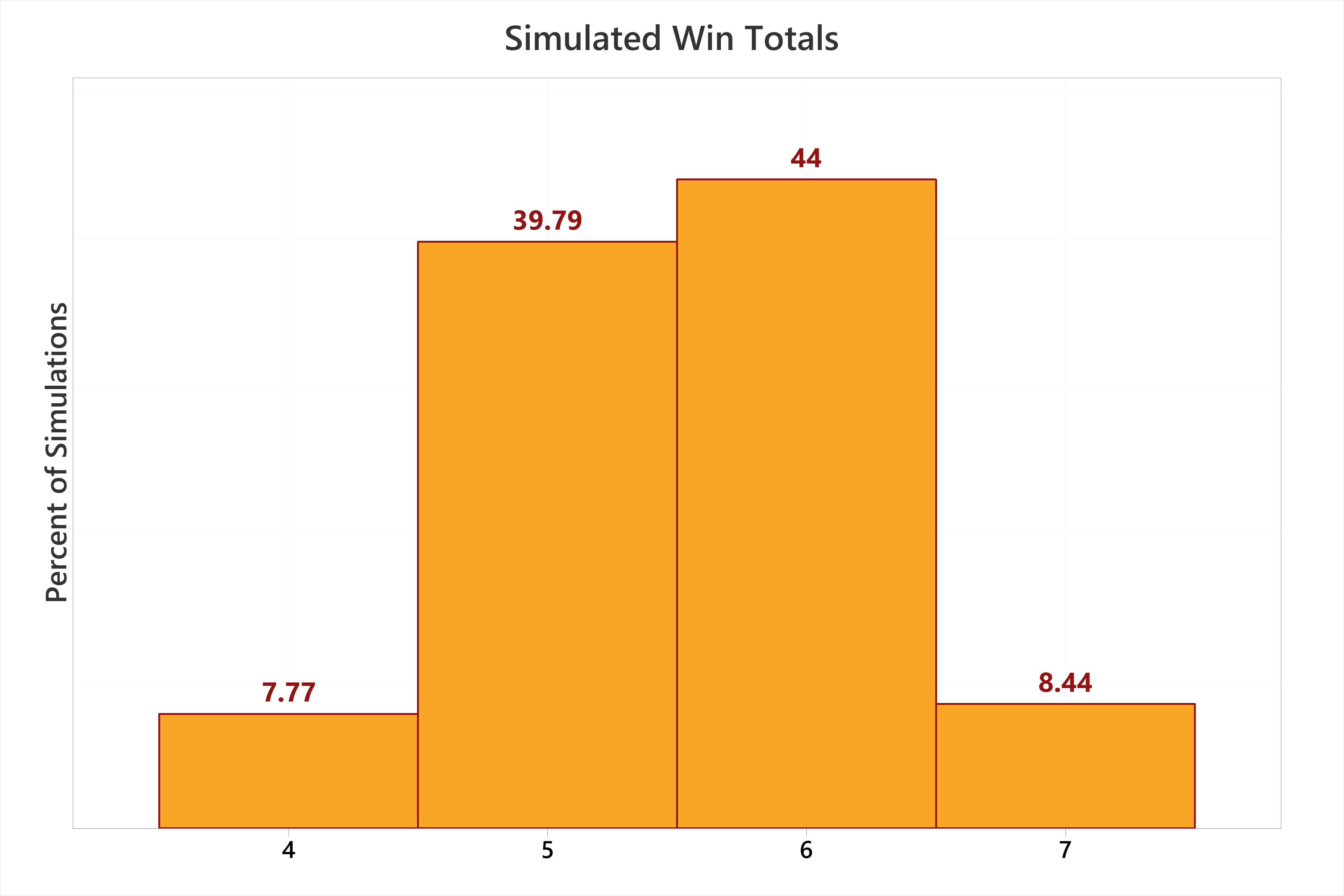 That's about an 84% chance of 1 or 2 more wins, and the rest is spread fairly evenly between winning out and losing out. The good news is that if there's only one more win to be had, it's most likely to come against Virginia — a result that wouldn't cure a 5-6 season but might lessen the blow a little. 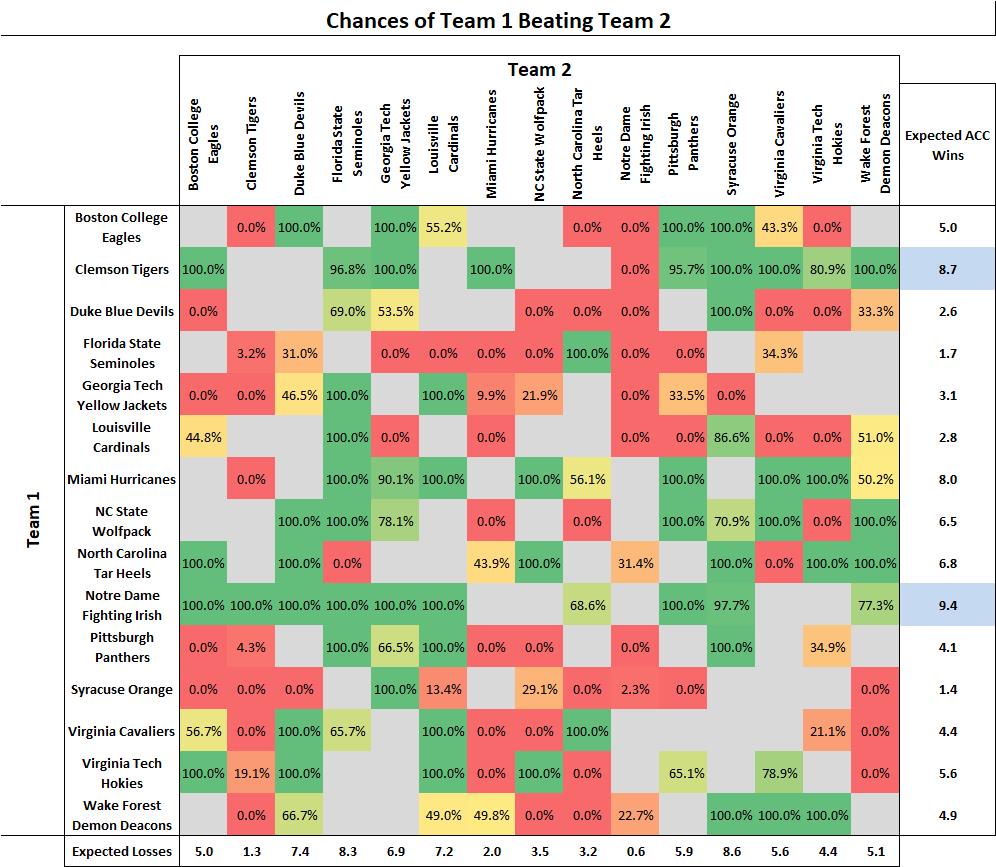 I'm not going to even try to work out a scenario where Virginia Tech appears in the ACC championship game, but if I had to I'm pretty sure it involves winning out, some unlikely game results, and massive COVID outbreaks on a couple of teams that last for weeks. At this point, the most successful outcomes involve just having a winning record and finishing 7-4 would be a huge finish.

That said, the Hokies continue to hover around a 20% chance of beating Clemson which...isn't bad...

Among teams that have played a "full" season so far, Virginia Tech has the highest run percentage in the nation at 62.3% for a non-triple option offense. And why not? Cincinnati is the only team in the country with a higher rushing average and the Hokies are gaining more rushing yards per game than anyone else as a result (again, excluding triple option teams and those that just started their season).

That efficiency will meet a challenge on Saturday, as the Panthers have the second lowest rush average per carry allowed in the country (2.4). Will the Hokies continue to try to keep the ball on the ground or take to the air? The answer is jet sweep. When in doubt, jet sweep. 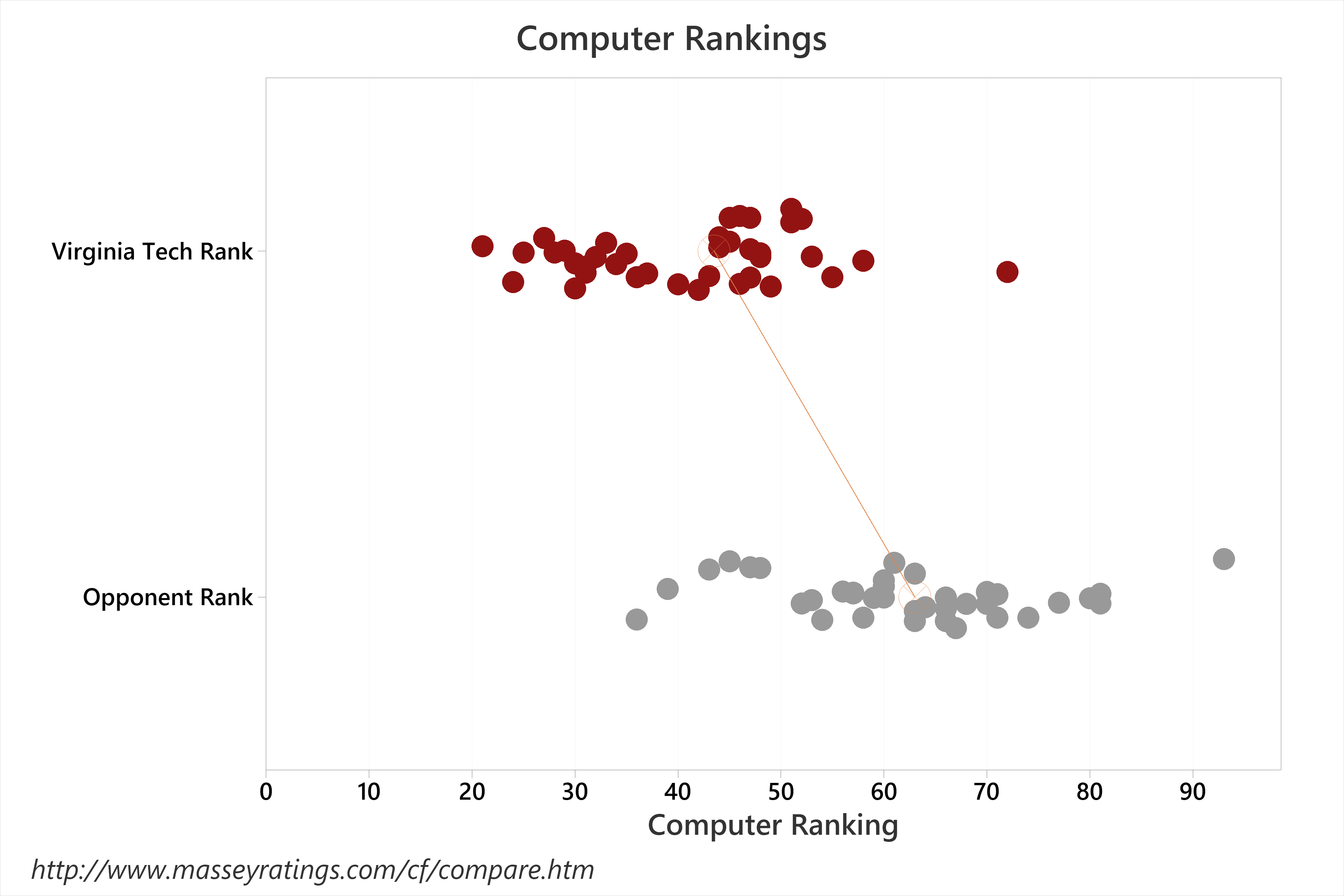 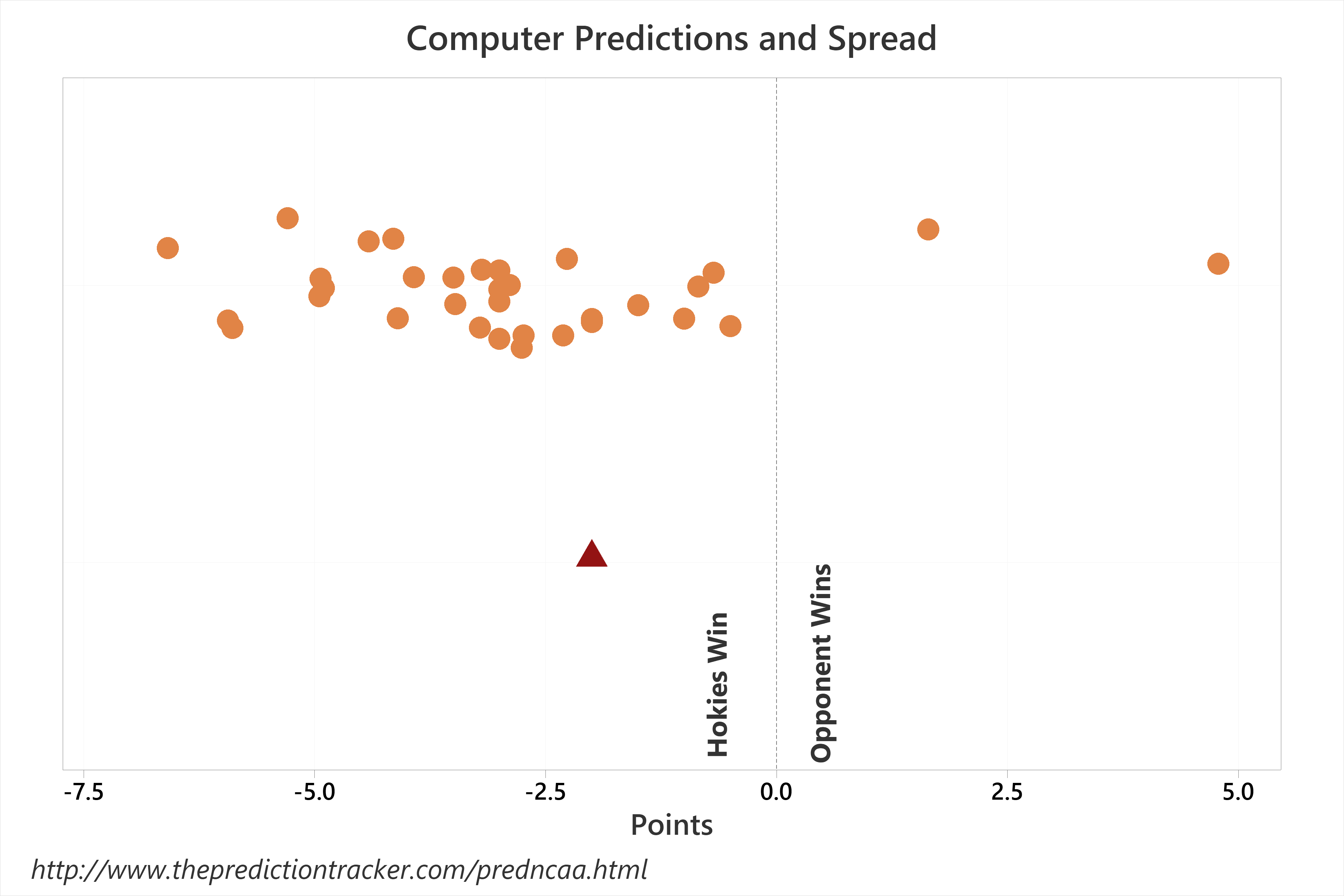 On a positive note, almost every computer predicts the Hokies are more likely to win this game than the Panthers. Less positive, games vary a huge amount from expectation and those computers all give Virginia Tech only a slight edge, aided by Pitt's home field advantage. The odds of a 2-point favorite winning is 56%. 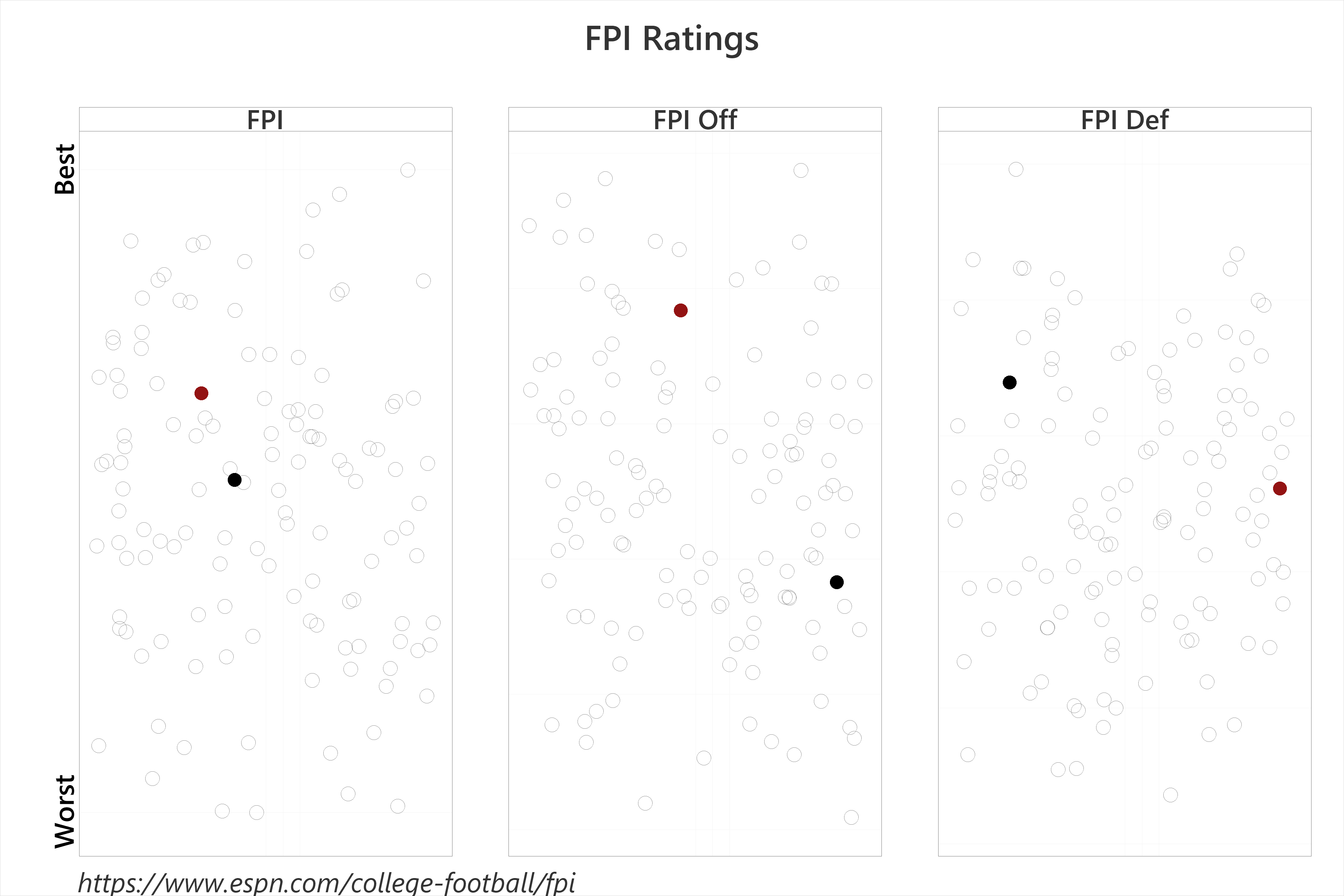 Subpar offense, good defense? Yep, that's a Pitt team. Only thing missing is a bruising running back. The matchup is definitely strength-on-strength, especially on the line as one of the better offensive lines in the country will face one of the best defensive lines.

Kenny Pickett is STILL the quarterback of the Pittsburgh Panthers:

Line control on offense will be critical for the Hokies. Whether via play-calling or execution, Virginia Tech has to avoid taking tackles for loss as they are unlikely to execute well enough in a drop-back passing game which requires time for plays to develop. The Hokies currently allow 5.25 TFL/game, and if Pitt is going to win they will have to exceed that number because they are unlikely to win it in other ways. If the Hokies can limit the carnage to 5 or less a win should happen. Six or 7 and this becomes a toss up. Eight or more and I hope no one wasted their good bourbon watching it.

As with so many other games, I feel like the Hokies have the ability to win this easily but play-calling could easily shoot themselves in the foot. For every time it seems like Brad Cornelsen really takes advantage of an opponent's weaknesses, there's another where he plays into their strength. And I have no idea what Saturday will bring, but feel like I will probably read way too much into what happens on the first few plays on offense.

In short, the results to date do not reflect the quality of Virginia Tech.

Are we a good team? No, good teams win the games they're expected to. Are we a bad team? No, bad teams are expected to lose and meet expectations. We are an enigma, which is, for some people, even worse.

We are favored in a lot of games because of our raw assets of veteran players. Was #6 in the nation but attrition since

I appreciate the optimism but I have no doubt fuente will find a new way to snatch defeat from the jaws of victory for the 3rd straight week...

Correct. This analysis assumes there a semblance of decent clock management, which has proven to not be the case. In addition it assumes reasonable on-field awareness, where formations and play calling are commensurate with the situation, which again has proven to be elusive.

The fact that analytics love us but we're still .500 means we're either the most unlucky team in the country, or our coaches are making an unusually high amount of errors at key times. Probably a bit of both.

Probably both, but I would say its leaning heavily on the side of the coaching making bad calls. With the statistical exception of Wake (3 TOs, probably 50% of our season total in penalties, and we outgained Wake), we haven't committed a lot of turnovers or penalties and the TOP is reasonable. The main stat that turns out in the favor of the opponents in the game we lost, big surprise, is total yardage. In all 4 of the games that we won we had 1) more total yardage, 2) fewer penalty yards, and 3) did not have more penalties total. To me that just screams inconsistency in execution and/or not adjusting to what the opposing defense is giving and taking away.

The formula for this team's predicted outcome is simple - If we have more total yards, and dont give up more penalty yardage than we gain, we win.

Eight or more and I hope no one wasted their good bourbon watching it.

i will try really hard not to spill any yelling at our coaches through the TV. This will probably be helped by not having any reasonable expectations for play calling. Plus, I will likely tune out as soon as Corny calls a run up the middle on third and 6-8.

Come on you should try to make it past the second series at least.

The answer is jet sweep.

Whether via play-calling or execution, Virginia Tech has to avoid taking tackles for loss

So, what you're saying here is our only chance is great execution?