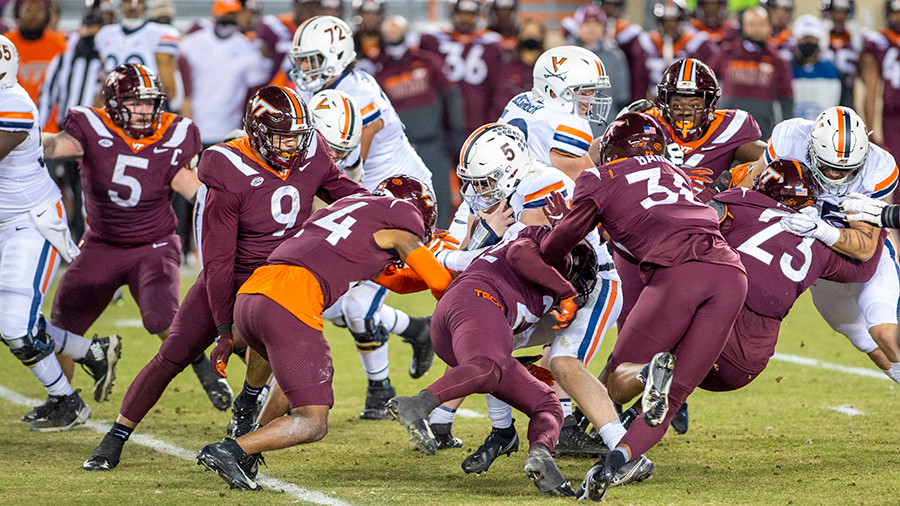 The Commonwealth Cup is back home where it belongs. Virginia Tech rode a wave of big plays en route to a 33-15 victory over Virginia. After four consecutive miserable losses which sparked conversations about the potential end of the Justin Fuente era in Blacksburg, the Hokies found a way to generate their own energy and play with resiliency, two adjectives that would be difficult to use in describing Tech during its losing streak. A multitude of special teams blunders put the Cavaliers in position to flip the momentum, and the Hokies responded each time. The players and coaches deserve credit for maintaining focus and responding to adversity.

Despite the dominant final score, it wasn't a masterpiece. While Khalil Herbert broke two long runs, the outside zone read game was effectively bottled up by the Cavaliers' front-seven most of Saturday night. Tech's offensive line didn't get nearly as much movement as I expected they would against a depleted defensive front. A lack of wide receiver blocking derailed the screen game. Maligned offensive coordinator Brad Cornelsen seemed slow to adjust to UVA's determination not to be beaten on the edge, which countermanned Cornelsen finally figuring out how to attack UVA's disguised soft shell coverage. Defensively, Tech's deficiencies in coverage were exposed often early. However, the combination of exotic zones that confused UVA quarterback Brennan Armstrong, shut down coverage by gamebreaking receiver Lavel Davis by corner Dorian Strong, and terrific hustle plays from Divine Deablo, Chamarri Conner, Norell Pollard, Amaré Barno, and Jarrod Hewitt energized the Virginia Tech sideline whenever the offense seemed to let opportunities to put the game away slip away.

The way UVA runs their 3-4 front confuses a blocking scheme and keeps their edge defenders clean to make plays with their range and length. It is very challenging to consistently operate an outside zone read focused running attack unless the edge defenders bust their assignments. This 1st-and-10 highlights the difficulty running an outside zone read.

UVA was in their base 3-4. Pre-snap the Cavaliers' d-line stems (shifts) towards the field-side. After the snap, boundary ILB Nick Jackson (No. 6) blitzes into the boundary A-gap, while nose tackle Jahmeer Carter (No. 90), shoots into the field A-gap. Meanwhile, boundary OLB Elliott Brown (No. 43) and field OLB Noah Taylor (No. 7), both stay at home.

The stunt inside messes up the blocking scheme. The o-line zone steps hard to the boundary. Carter ends up splitting the difference between left guard Lecitus Smith (No. 54) and left tackle Christian Darrisaw (No. 77). Smith rightly hands off Carter to Darrisaw and then picks off Jackson. However, Jackson made sure to contact center Brock Hoffman's inside shoulder as he shot the A-gap. That causes Hoffman to turn inside, instead of continuing to step laterally to his right. D-end Adeeb Atariwa (No. 95), attacks between right guard Doug Nester (No. 74) and right tackle Luke Tenuta (No. 69), preventing Nester from reaching him and Tenuta to sliding off and getting to the second-level. In essence, the stunt creates two picks for MLB Zane Zandier (No. 8). Effectively, three defenders tie up all five o-linemen, leaving Brown and Zandier as free hitters to account for Herbert, while d-end Tommy Christ (No. 50), and Taylor went unblocked and account for quarterback Braxton Burmeister on a keeper.

With so much strength on the edge, the Hokies needed to get some quick hitting down hill plays to pull those outside linebackers inside. Cornelsen turned to an inside isolation concept; the H-Back's role was similar to an I-formation fullback.

Fuente Sees a Need for 'Drastic Improvement' on Depth as the Hokies Move Through Spring Practice
Alex Koma, 04/08/21
1 day (81)