2,800-word film breakdown of what to expect from Virginia Tech's signal caller and the opportunities for him to grow into the offense more. 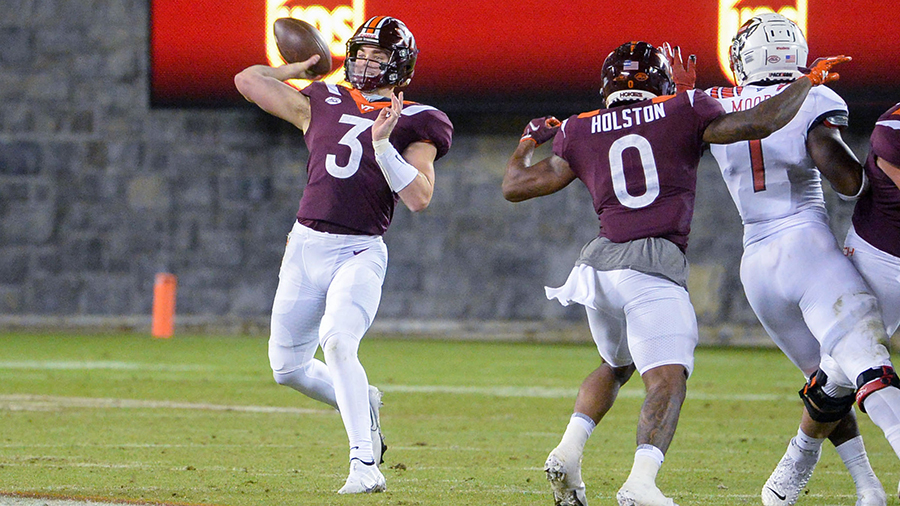 With Virginia Tech firmly committed to Braxton Burmeister running the offense, a challenge for the coaching staff this season is how to more effectively get the football into the hands of Tré Turner, James Mitchell, and Tayvion Robinson. While I still expect an effective running game, the absence of Christian Darrisaw and Khalil Herbert makes it difficult to believe that the Hokies can replicate 2020's gaudy average per carry (5.58, 9th nationally) and home run potential. Finding ways to work within Burmeister's strengths to get those playmakers the football in space is the biggest key to offensive success in 2021.

"He's [Burmeister's] a really sharp kid," said Brad Cornelsen. "He's spent a lot of time in the office. He's into it. He's taken advantage of the extra time that he can spend up here. He's put himself in position to have a great season. We tried to expand in the passing game this spring, and challenged him and the offense in that way. I like where that was this spring, we got to continue to do that. He's got a chance to be the full package, the dual threat guy, and we've got the ability to have pieces around that position to highlight that.

The Donut Hole in the Middle of the Field

Last year, Burmeister had two distinct seasons in one. While replacing Hendon Hooker against NC State, Duke, and UNC, he was a low volume thrower using much of the same route structure we have been accustomed to seeing from Cornelsen's offense since 2016. One such staple was a post-flat/screen combination, sometimes combined with a play action fake.

On the variation below, Burmeister fakes a handoff to the boundary. Back to the trips receivers on the field-side, slot Raheem Blackshear (No. 6) backpedals down the line on a screen fake. Turner (No. 11), in the wide slot, fakes a block and then runs a slant.

The run and bubble action look to do two things. The run fake needs to get the single high safety to bite to the field-side. While the bubble action has to draw the inside nickel to the sideline, clearing him out of the throwing lane for the slant. Turner does a really nice job of delaying to let the inside nickel (No. 6) clear. However, I don't like Turner's sight adjustment to the free safety or the initial design. If the single high safety bites and sits down, he would arrive right in the throwing lane to de-cleat the wideout. Instead, Cecil Powell (No. 4) bites, but then backpedals, taking himself out of the play. Turner should have flattened his route out a bit, making it more of a cross than a slant to stay well out of Powell's range. Burmeister never sees him and is locked on to Turner the whole way. That was an on-going theme watching any throw Burmeister made to the middle of the field.

It doesn't seem like Burmeister does a good job of seeing the safety help in the middle of the field, and several of his early season throws there flirted with interception. On this critical 4th down against North Carolina, he was completely locked into Turner running a slant from the slot, and never saw field-side safety Don Chapman (No. 2).