After everything that could go wrong went wrong in the first half, the Hokies defense provided a chance to steal a win. The effort was undone by baffling red zone play calling and a lack of audibles that left Tech's most proven playmakers helpless to determine the final outcome. 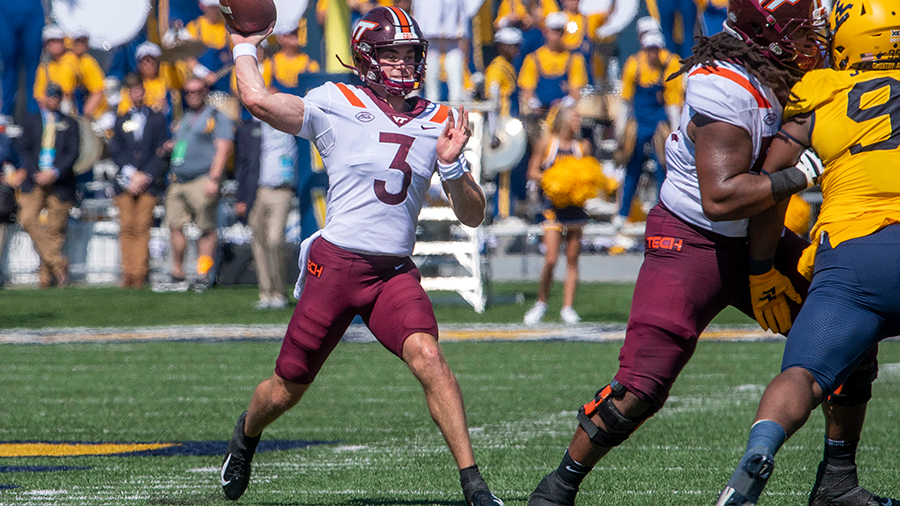 Morgantown was Virginia Tech's first legitimate road test since 2019, and Justin Fuente's team spent most of the first half looking like they didn't study. The Hokies did everything they couldn't afford to do to beat West Virginia. Their interior linemen were consistently pushed backwards by Dante Stills and company. A conveyor belt of WVU edge rushers hammered Braxton Burmeister. The defense suffered gap fit and coverage breakdowns I haven't seen since Pitt last season. And, the passing attack once again sputtered. Game efforts from Kaleb Smith, Raheem Blackshear, and Jalen Holston, a much more sound second half defensive performance, and a late interception that gave Tech four plays inside the 10-yard-line weren't enough to win. The lack of a viable game attack and questionable red zone play calling sent Virginia Tech home with another painful rivalry loss in the Justin Fuente era.

The Problems with the Passing Game

The lack of any kind of consistent passing attack, especially in clear passing situations, has been an Achilles heel of Tech's offense since Fuente took over the program. On Saturday, Braxton Burmeister didn't have the timing with his receivers for three quarters. The offensive line had their worst day in pass protection since the aforementioned Pitt game. Most importantly, the structure of the drop back passing game too often didn't give the receivers or quarterback a chance to make a play.

Watch this early example. Virginia Tech lined up fast, and then checked with the sideline. I assume Brad Cornelsen expected man-to-man with a deep safety to the boundary, and called a bread and butter slant-flat combination.