2,400-word, 10-play film review of the offensive adjustments which led to the Hokies' best day running the ball this season, the shortcomings that held that unit back, and analyzing a defensive regression and collapse. 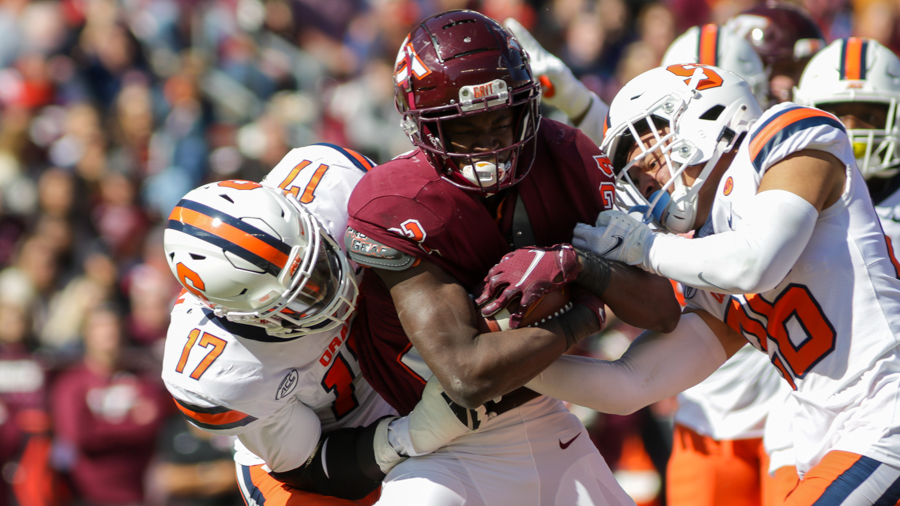 The Hokies did some good things on Saturday. Malachi Thomas, using the quick hitting inside zone game I have pleaded for over the last month, and Raheem Blackshear broke some big runs. Special teams helped spark momentum turns, and the offensive line found a little bit of the mean streak that it had in 2020. Virginia Tech averaged 5.91 yards on the ground.

However, yet again offensive playmakers couldn't make plays in the passing game at key moments, while Syracuse's receiving corps accounted for two late touchdowns. Perhaps more troubling was a serious regression defensively in terms of gap responsibility and pursuit. If this was the week to make Justin Hamilton the interim coach, that defensive performance would make it a very difficult pill to swallow. Tech's defense looked unprepared, disorganized, and unmotivated, and the Hokies had yet another late fourth quarter meltdown loss to show for it. While the coaches deserve heat, a lot of players need to decide if they want to be part of the solution, or part of the problem.

While the 36-41 result and the appearance that Syracuse was a more talented team are indictments of the coaching staff, the play calling on both sides of the ball was not as awful as you may have been led to believe. Offensively, Brad Cornelsen (can I write his name without "maligned" preceding it?) incorporated some of the changes in the run game that I have said for weeks will make Tech's offense more effective.

They centered around a more north-south, quick hitting approach. Here are two early plays showing the synergy between the quick hitting zone reads and play-action pass.

On the above inside zone read, quarterback Braxton Burmeister seemingly options boundary outside linebacker Stefon Thompson (No. 7). Back to the inside, right tackle Parker Clements (No. 70) caves in defensive end Caleb Okechukwu (No. 93). Right guard Kaleb Moore climbs to the middle linebacker, Mikel Jones (No. 3).

Syracuse only had six in the box, and with the run action, the Hokies had good numbers to the play-side. Burmeister's run threat freezes Thompson. Jones initially flows to his right away from Moore's initial step, and Moore turns and takes him outside. Thomas does a great job of attacking the line, but then making a subtle quick cut off of Moore's block to burst into the second-level. The quick hitters mean blockers don't have to maintain blocks long except at the point of attack, allowing a defense that spent all week preparing to flow to the Hokies' never-ending parade of outside zones to stretch itself out to the point of breaking inside.