Part two of a two-part film evaluation of the Hokies' pair of recent quarterback transfers. Nine-play film discussion of what the South Carolina transfer brings to Virginia Tech. 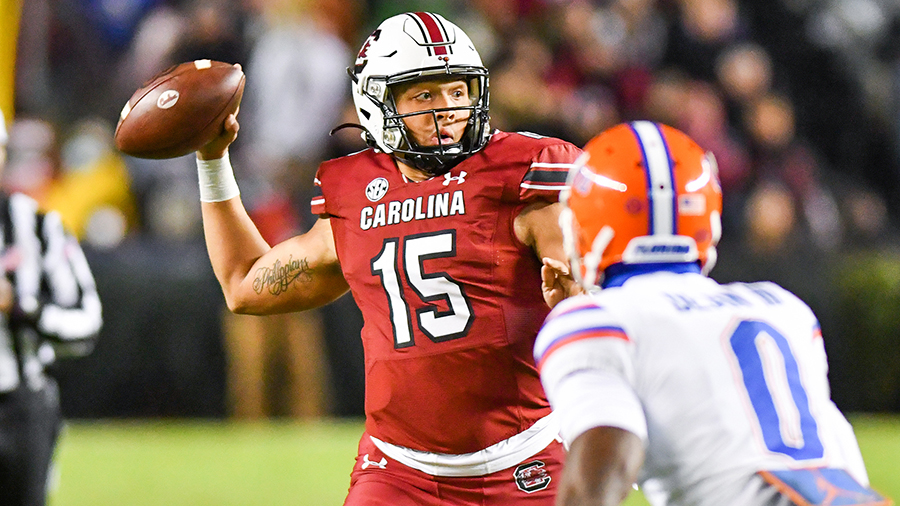 Virginia Tech was Jason Brown's dream school. The Chancellor HS (Fredericksburg, VA) product frequently camped in Blacksburg with the hopes of earning a scholarship. When it didn't come, he signed with St. Francis as a member of the 2017 class. In his only season as QB1 (2019), he threw for 3,084 yards (62.3%) and 28 touchdowns. Those numbers were good enough to earn him an honorable mention All-American nod, and eventually catapult him to South Carolina after COVID-19 canceled his 2020 season. Brown started four games in 2021 for the Gamecocks, and he helped South Carolina seal bowl eligibility with wins over Florida and Auburn.

Despite the fascinating road he has taken to Tech, the fanbase might be more excited for Brown's competition, Marshall transfer Grant Wells. Brown's numbers don't help to win the perception battle among the transfers. While posting two big SEC wins, Brown averaged just 6.7 yards per attempt, 721 passing yards and only completed 55.6% of his passes. However, I think Brown will have a better shot at beating out Wells than some may expect.

As I discussed in the review of Grant Wells, I expect a run-heavy spread look under Tech offensive coordinator Tyler Bowen. With that scheme, The Hokies will only use a run threat fake from the quarterback on occasion to freeze a defender, and will mostly rely on getting a hat on a hat up front, while mixing in play action and RPOs to keep the defense honest.

As South Carolina found their footing offensively, they employed a very similar power running approach. In the pair of games I reviewed of Brown as the starting quarterback, the Gamecocks did not use him on a single designed run or read option play. Brown has a bit of an awkward running style, but he consistently executes fakes and shows the defense the proper run action. That pays off in the play-action game, and at least creates the opportunity to get the edge if Bowen calls a read option.

On this inside power, Brown hands off to Zaquandre White (No. 11), and then attacks the edge on his run fake. Based on alignment, either the edge defender, Eku Leota (No. 55), or the field-side safety, Donovan Kaufman (No. 1), should account for the quarterback. Both players pay nominal attention to Brown, but both (Kaufman in particular) give up contain responsibility quickly to attack the dive. Watch how the Gamecocks approached the same run look on this 3rd-and-goal.