Should I be Nervous? The Ultimate Guide to Hokie Anxiety in 2022

Evaluating all of the things that should and should not raise your blood pressure over the course of Brent Pry's inaugural season. 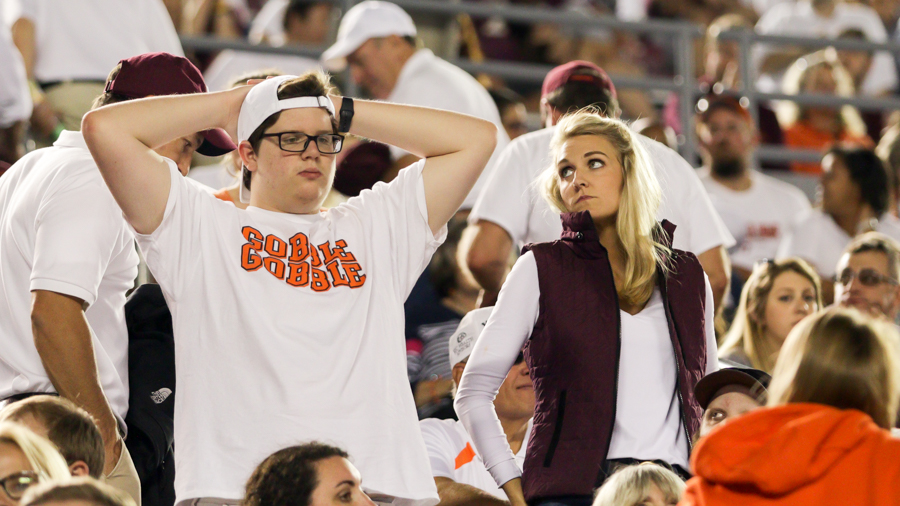 Panic. Terror. Pain. Five-alarm fires in your brain that lead to you daydreaming about the backup right tackle situation when you should be paying attention to a sales call.

This, my friends, is called sports anxiety.

It's a real (not real) condition (not a condition either), inflicting millions of fans every year. And I'm not sure if you've poked around Virginia Tech Twitter the past five years, but this affliction seems to plague the fan base regularly.

So to get ahead of it, I've concocted a very scientific (not scientific at all, I just made it up) system to add a 1-10 scale for those anxieties. There are things fans should actually be nervous about, and thoughts that should probably remain in drafts. And my WILDLY accurate (I don't know, do you ever believe me when I talk?) system is here to help you determine which is which as the Hokies head into the 2022 season.

Panic Level: 3 out of 10 anxieties

For the first time since...Mark Leal? ...Tyrod Taylor???...Virginia Tech has a backup quarterback who can fill in and actually run the offense according to the game plan. Not a Quincy Patterson package. Not a Brendan Motley wildcat special. No, a full-on gamer who can do things like this:

Jason Brown has an awkward style — I'm not sure he's ever been smooth a moment in his life. But I have no doubts in his ability to come into a game that's already into the second or third quarter and make something happen. This won't be a year where Tech can only manage 73 passing yards against Boston College. If Brown's name is called, he'll be ready to go.

Grant Wells goes down for an extended stretch

But, there are reasons Brown didn't win the job in Blacksburg. And they're probably the same reasons he couldn't keep the job in Columbia. He's a little inaccurate (he completed 55% of his passes last year), a little too loose with the ball (four interceptions and a fumble in four games as a starter) and holds onto it a little too long (he was sacked eight times against Auburn/Missouri/Florida).

This isn't a knock on Brown, we knew all of this the minute he transferred. He's good enough to fill in for a game or two, but not good enough to play more than three. If the Hokies have a pie in the sky, best case scenario ceiling of eight wins, Grant Wells has to start the full season. If Brown is forced into action for an extended stretch, that ceiling dips into the five-to-six win range. It could be the difference between a Brent Pry ACC Coach of the Year run and a Brent Pry 2023 offseason damage control tour.

Panic Level: 2 out of 10 anxieties