Evolution of the Passing Game

With a renewed commitment to the intermediate passing game, Virginia Tech quarterback Grant Wells picked apart the Wofford secondary in a solid, if not unspectacular, win. 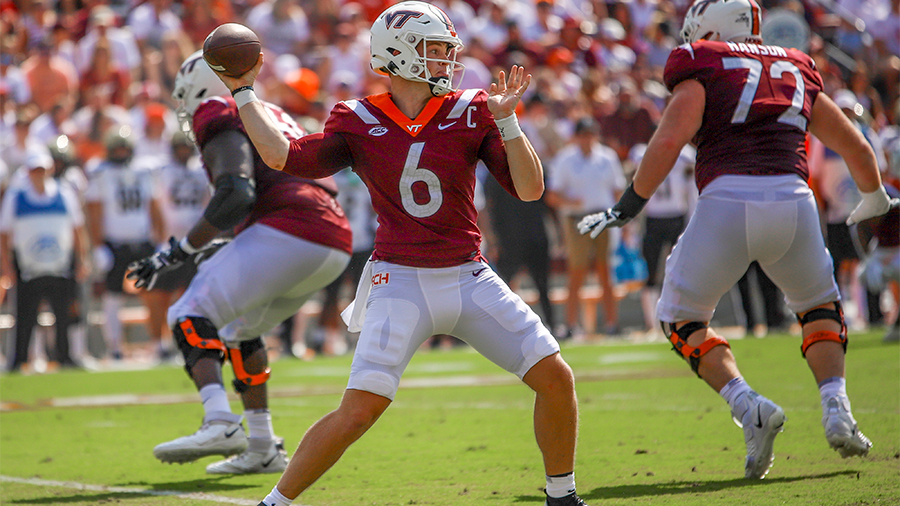 So the saying goes after Virginia Tech dispatched Wofford 27-7 on Saturday. Quarterback Grant Wells was surgical through the air, completing 26-of-35 passes for 314 yards with two touchdowns and no interceptions. Tech's defense was stout, holding the Terriers to 3.4 yards per play through the first three quarters before the backups took the Lane Stadium field late. The Hokies did just enough to come away with a comfortable victory, though perhaps not quite enough to satiate the portion of the fanbase that was looking for a dominant performance against one of the FCS' worst teams.

Despite the win, Virginia Tech's running game continued to struggle. The Hokies were without their top running back in Keshawn King, and the lack of explosiveness was evident: Tech averaged just 3.2 yards on the ground, their longest run of the day going for 11 yards. Meanwhile, the offensive line has been a nightmare, as the Hokies have plummeted to 125th nationally in PFF run-blocking grade. Only one Power Five program (South Carolina) has fared worse.

While the failures of the ground game certainly merit their own discussion, I want to focus today on Virginia Tech's passing offense, which displayed a much greater competency last week than in their previous two games. In particular, the Hokies showed a willingness to take what the Wofford defense gave them, dinking and dunking their way to a 475-yard performance on a steady diet of short and intermediate throws. You might have to squint to see it, but Virginia Tech's offensive coaches have brought a brand-new dimension to the passing game that was sorely lacking under their predecessors.

Tech's passing offense looked much better all-around on Saturday, albeit against a lower-division opponent that has lost 13 straight games. In last week's piece, I talked about how Wells had been struggling mightily on throws behind the line of scrimmage. Against the Terriers, we saw a much different approach from offensive coordinator Tyler Bowen based on how the defense was playing. Wells did not throw a single pass behind the line of scrimmage; instead, Tech utilized the short-passing game, as Wells completed 16-of-21 short passes, picking apart Wofford's cover 2 defense. (Read French's film review that discusses Tech's frequent use of the wheel route/hook combo.)

One thing that Justin Fuente and Brad Cornelsen rarely did in their last two years at Virginia Tech was throw the ball over the middle of the field. Playing with the directional passing numbers from PFF, I created a category called intermediate throws, which I define as throws 1-19 yards downfield and between the numbers. In 2021, Virginia Tech ranked dead last among 130 FBS teams in percentage of intermediate throws (20.8%). They simply ignored almost two-thirds of the field.

Fuente and Cornelsen were fond of throwing behind the line of scrimmage, and when they did go downfield, it was usually a fade route. We can understand to some degree why the coaches structured the passing offense this way. In order to make throws over the middle, you need to have a quarterback with a strong arm who can fit the ball into tight windows, and Braxton Burmeister certainly was not that. Additionally, throws over the middle almost always entail risk — if you throw late, the ball will get picked — and the fade route is a very low-risk play: either your receiver catches it or no one does.

On the flip side, fade routes are also one of the least efficient routes in football (in the red zone, anyway), and completely ignoring a huge chunk of the field seems like an unwise strategy. Part of the value of throwing over the middle is to keep defenses honest; otherwise, they can just guard the hashes and bring pressure from up the middle. My biggest gripe with Cornelsen's passing offense was the complete abandonment of intermediate throws — the RPO slants, shallow crosses, curls, etc. He and Fuente organized the offense around the "safe" throw, but they took it to such an extreme degree that it made it near impossible to push the ball downfield.

Fast forward to Tyler Bowen. With a strong-armed quarterback in Grant Wells, Bowen has made clear he wants to use the middle of the field. The Hokies have gone from 130th in intermediate attempts last year to 58th this season. Bowen has also increased the percentage of short throws (127th to 8th) and drastically reduced the number of throws behind the line of scrimmage (18th to 108th), which account for only 12% of Tech's pass attempts.

Everything gets backs to Wells and his ability to fit the ball into tight windows.

Here's a perfect example. In this clip, Wells hits Kaleb Smith (#83) on a skinny post about 15 yards downfield. It was a perfectly thrown ball as Smith caught it in stride.