Virginia Tech has been off this week after its Wednesday meeting with Boston College was postponed. Enter Syracuse, a talented and underrated ACC foe. The Hokies have their hands full in the Carrier Dome on Saturday. 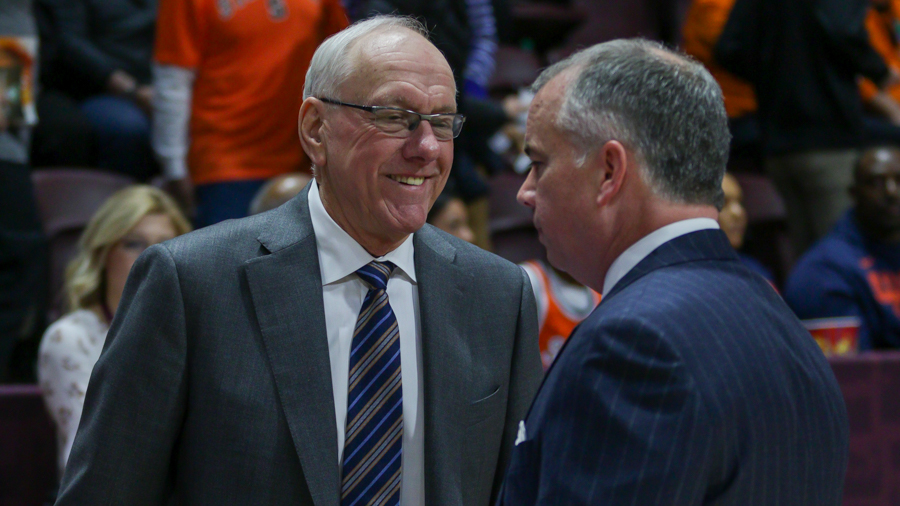 It's been a long week, and not having any Virginia Tech men's basketball has dragged the days out even more. The Hokies are back in action on Saturday afternoon at Syracuse, though, in their third road contest of the season.

Tech hasn't played since its "unconventional" win over Wake Forest on Sunday in Winston-Salem, a game in which Mike Young's ballclub posted a -7 rebounding margin, a -2 turnover margin and was outscored in the paint and off turnovers.

Nonetheless, Tech has won three consecutive games and has found ways to pull out important results, even when it may have seemed unlikely at times.

The Hokies face an inconsistent Syracuse squad which sits at 8-4 overall, 2-3 in the ACC. 'Cuse lost three conference games in a row in a ten-day span, falling to Pitt twice and North Carolina once. The Orange got back on track on Tuesday against Miami, running past the Hurricanes 83-57.

Buddy Boeheim played a large role in both contests in 2019-20, scoring ten points in the Carrier Dome and 26 in Cassell Coliseum. He and Elijah Hughes comprised most of the Orange's attack last season, and he has a similar role with this team. He's averaging 16.0 points per game and has shot 40% from the floor through nine games this year.

The 6'6" junior from Fayetteville, N.Y. has scored in double figures in his last four contests, including 23 points (9-16 FG, 4-8 3FG) against Miami. As Tech saw last January in Blacksburg, the coach's son can stretch the floor and hit clutch shots when needed. Though he isn't the complete center of Syracuse's offense, Boeheim is a tough guard due to his ability to play anywhere on the floor.

Alan Griffin has emerged as a talented option on the wing that can help space the floor. He's the focal point of Jim Boeheim's offense, shooting 36% from behind the arc and 45% from the floor while averaging 15.8 points and 6.9 rebounds per game.

He racked up a season-high 28 points at Pitt on Jan. 16 on 10-18 shooting. A solid scorer and rebounder at 6'5", Griffin will most likely be matched up with Tyrece Radford and whoever else Tech sticks at small forward.

Joseph Girard is the guy that makes the Orange go. The 6'1" point guard from Glen Falls, N.Y. is averaging 11 points and four assists per game and is the catalyst on both ends of the floor.

He scored 18 points between the two contests last season and tallied three assists and three turnovers. His last outing against Miami, 23 points (8-15 FG, 5-9 3FG) and four assists, was his best performance this season. He's a crafty guard that has been up and down this season and someone that 'Cuse will heavily rely on. Tech will need Wabissa Bede to contain him on Saturday.

Quincy Guerrier has become a very efficient player for Syracuse in just his second season. The 6'7" forward is No. 13 in the NCAA in KenPom's turnover rate and No. 22 in offensive rating.

The Orange's leading scorer at 16.7 points per game, he almost averages a double-double with 9.7 rebounds per game. He's scored in double figures in all but one game this season and grabbed 14 boards in a two-game stretch at UNC and Pitt. Justyn Mutts, the likely matchup on the defensive end for Guerrier, will have his hands full, especially considering Guerrier is shooting 58% from the field this season.

Guerrier performed well in the meeting in Syracuse last season, tallying 12 points and nine rebounds. In Blacksburg, he was held to just five points, though he did grab nine more rebounds. If Tech wants to have a chance on the boards, boxing Guerrier out is the way to go.

is in his fourth season with Syracuse and is almost as efficient as Guerrier, averaging 10.7 points and 5.3 rebounds per game while shooting 56% from the floor.

The 6'10" forward from Slovakia only recorded six points and six rebounds in the first meeting last season but flipped the script in the second go around, dropping 11 points and grabbing 11 boards.

He rarely comes off the floor for the Orange, averaging 35 minutes per game, and is a gritty frontcourt player that scored three of Syracuse's final five points in the second contest last season. He anchors SU's 2-3 zone and will be a tough matchup for Keve Aluma in the frontcourt.

In the first game between the two programs last season, the Hokies stayed alive thanks to Jalen Cone's 19 points off the bench on five made three-pointers. Tech trailed by six at halftime and forced the Orange to make just 37% of their shots in the second half, holding on for a 67-63 win in the Carrier Dome.

In the second meeting, Virginia Tech was doomed by a poor start. By way of 33% shooting in the first half, Tech dug itself an eight-point hole. Even though the Hokies eventually poked their heads out of it, Syracuse was better down the stretch and a Landers Nolley's three-point heave clanged off the rim at the buzzer to secure a two-point loss.

Point being, Tech was successful against the Orange last season when they didn't get behind early. Just like UVa's pack line defense, it's tough to come back from a deficit against Jim Boeheim and his iconic 2-3 zone. When the Hokies didn't fall behind quickly in the first meeting, they were successful. The slow start doomed them in the second meeting.

Syracuse is very efficient on both ends of the floor. Rated No. 3 in the ACC in offensive efficiency, the Orange don't have a poor offensive statistic outside of free throw rate, meaning they don't get to the free throw line much. They play at a fast pace too — Syracuse is No. 1 in average possession length and No. 2 in tempo.

Expect many quick possessions, kind of at a North Carolina pace. The Orange rarely turn the ball over and are a good shooting team, both inside and out, so they can really pick their poison. Tech will need to force some turnovers if they want to stunt the progress of Syracuse's offense.

Forcing miscues is huge, simple enough. Tech has been fairly solid at that end this season, good for fifth in the ACC defensively.

Some good news for Tech: Syracuse allows the most offensive rebounds in the league and opponents frequently get to the free throw line.

Still, this is potentially the best defense, statistically in ACC play, that the Hokies have faced all season. Clemson and Louisville were stingy, but Syracuse's 2-3 zone is another animal.

Last season, Tech combined for just 26 points in the paint in the two meetings. Syracuse had 62 total — 28 in game one, 34 in game two.

The Hokies are much more improved in that area this season and should be able to use Aluma and Mutts to draw in the zone and create open looks for shooters like Cattoor, Cone and Alleyne.

Unlike previous seasons, though, if Tech's offense is effective, Young & Co. should not necessarily live and die by the three. That was on display against Wake Forest when the Hokies made only four of 18 attempts from behind the arc.

Getting Aluma going, taking care of the ball and moving it to find the right shot offensively is the most important thing to watch for Virginia Tech. Wake Forest was a good example of how Tech looks when Aluma and Cone are having off-nights: not very good.

"This is the Atlantic Coast Conference, man," Young said after Tech's win over Wake Forest. "It's hard. You've got to play good basketball. We didn't play great basketball tonight. We won, and the last time I checked, that's the only thing that matters."

If the three-point shot isn't falling early for the Hokies, Tech need not fret. It will take a methodical approach (good basketball), something Tech is very capable of, to knock off this Orange team that is pretty underrated, in my opinion.

If Tech can keep pace, crash the boards, get to the free throw line and take care of the rock, it should be a positive showing in The Empire State.