The Hokies added a Tight End / H-Back to their 2021 recruiting class. Gibble goes in-depth on his decision and his style of play. 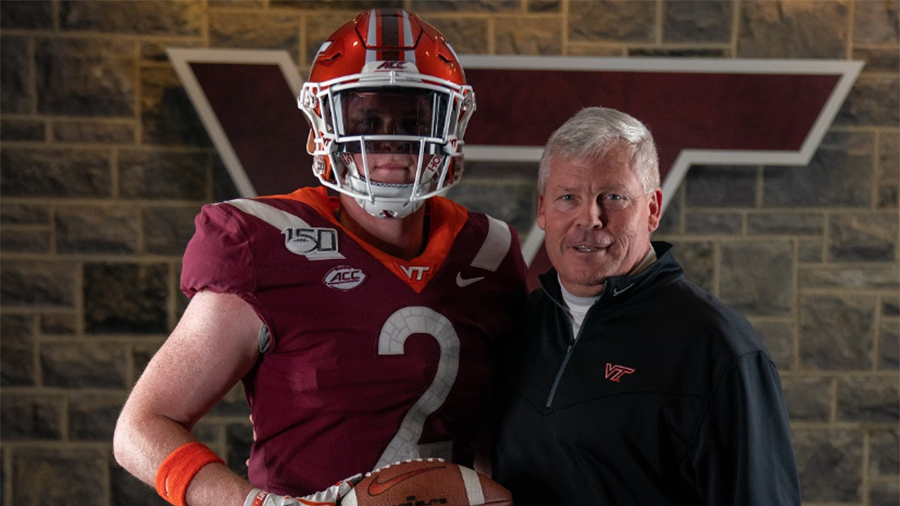 Jared Gibble poses for a photo with James Shibest during an unofficial visit to Virginia Tech.

The Hokies nabbed a tight end on Tuesday when they flipped former UNC Charlotte commitment Jared Gibble. The verbal might have caught some by surprise, but Virginia Tech has steadily recruited Gibble since his sophomore year. Although, they only officially offered him on August 23, his 18th birthday.

"To get up from a birthday dinner and have that phone call was just the biggest present I could have had," said Gibble. "Honestly. It was amazing."

He called Justin Fuente the following day and committed on the spot. The offer was a long time in the making, and throughout his recruitment tight ends coach James Shibest was a straight shooter on where Gibble stood, and he appreciated the transparency.

"I think they were going after a couple kids that were ranked a little bit higher than me, possibly a little bit bigger than me," said Gibble. "He told me from day one, 'Hey you may not be our number one so to speak, but we like you. We want you to be a Hokie. So if you just hang in there with us and have faith in us, we'll be able to make you a Hokie and we can use you in a way you need to be used.'

"So that's always been awesome."