Near 3,000 word analysis plus film breakdown of the Hokies' defensive starters, linebacker reserves, with a closer look at the performances of DaShawn Crawford, TyJuan Garbutt, the top corners, and more. 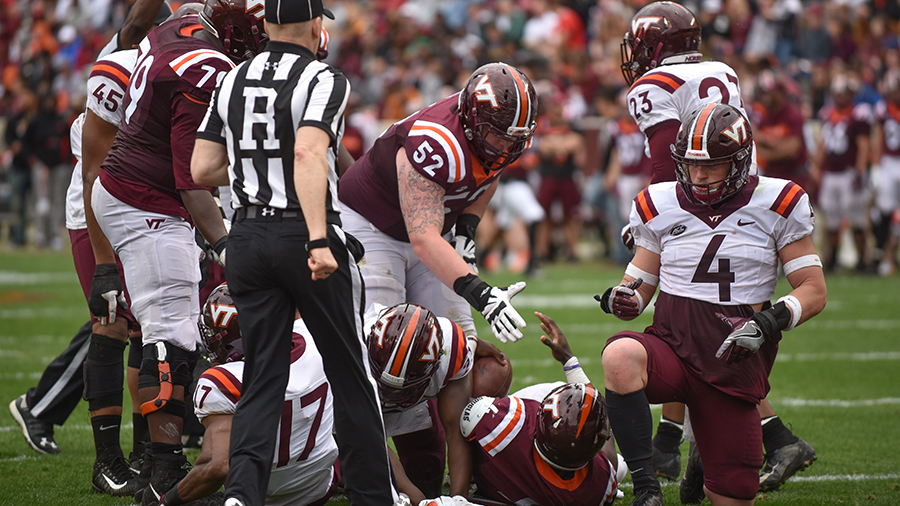 After a calamitous end of the 2018 season for the Virginia Tech defense, significant personnel challenges faced the Hokies. The departure of Ricky Walker and Vinny Mihota left a glaring lack of depth at defensive tackle. Previously inexperienced cornerbacks had exhibited little to inspire confidence. And, most significantly, the execution breakdowns which plagued the Tech free hitters got worse as the season progressed. Bud Foster and his staff sought some quick personnel fixes by adding JUCO defensive tackles DaShawn Crawford and Jaden Cunningham, JUCO cornerback Brion Murray, and talented freshman safety J.R. Walker. Those newcomers will combine with a large group of freshmen and sophomores to try and get the defense back to their usual standard of excellence. Murray, Walker, and Crawford made their Virginia Tech debuts in the spring game, with Crawford working as a starter at defensive tackle.

For Starters: The Good

The first defensive group featured most of the starting defensive group that wrapped up the 2018 season. Crawford replaced Walker at left defensive tackle. With Khalil Ladler and Chamarri Conner injured at whip, redshirt freshman Nasir Peoples got the start. Caleb Farley and Bryce Watts started at cornerback (and Jovonn Quillen rotated in). Dax Hollifield and Rayshard Ashby worked at inside linebacker. Divine Deablo and Reggie Floyd paired at safety. Joining Crawford up front were d-ends TyJuan Garbutt and Emmanuel Belmar, plus d-tackle Jarrod Hewitt. This group was shredded on the ground by the Cincinnati Bearcats in the Military Bowl. I wanted to see this group be gap sound up front and for Floyd and Deablo to fill the alleys effectively. Based on this criteria, I though the first team defense delivered a pretty solid performance, with Floyd and Deablo looking significantly more confident than the end of last season. Foster tended to agree.

"I thought our run fits have been better all spring," said Foster. "I thought our perimeter play as far as compressing the running lanes, bringing the proper arm, doing those fundamental things...we're so much better right now."

Crawford is a player who must provide some of the playmaking (beating blocks and having the athleticism to tackle in pursuit) which was noticeably absent when Walker missed time with injuries last season. Crawford showed a great deal of quickness and provided the offensive line a ton of trouble.

Check out this quarterback power. Crawford (No. 95) read the pull of right guard Austin Cannon (No. 52). Center Zachariah Hoyt (No. 75) attempted to block back and seal Crawford outside.

Crawford delivers an electric swim move, leaving Hoyt on his knees. Crawford loses his balance right in front of Quincy Patterson and forces him to cut back. Garbutt (No. 45) beats right tackle Silas Dzansi (No. 60) to the inside on a spill and then is able to cross back to the outside to stop Patterson. Deablo is in the alley outside of Garbutt. Back to the strength, Hewitt, Ashby, and Belmar fit into the A, B, and C gaps. Hollifield is unblocked on the edge and Floyd is there for support.

The interior guys all are strong with their fits. Crawford makes a play, and Garbutt displays terrific athleticism. Hollifield, Floyd, and Deablo are all in the correct spot to support the alley.

Schematically, I am a little worried that the combination of the quarterback power and the zone fake to the field left Virginia Tech without a true free hitter. Dzansi should have accounted for Garbutt and Hoyt should have accounted for Crawford. Had the offensive line executed their blocks, Deablo would have been left to account for Caleb Steward's (No. 30) fake (and potential block) and Patterson if he bounced outside, basically a one-on-two proposition for the defense.

Garbutt was consistently disruptive and strong.

On the goal line zone run above, Luke Tenuta (wearing No. 95 as a tight end eligible) gets his head inside of Garbutt. Crawford beats Dzansi inside to force Steward to bounce back to the boundary. Garbutt keeps his feet moving and pushes Tenuta into Garbutt's gap responsibility and has the wherewithal to find the football.

Floyd comes up in strong support, with Hollifield as the force defender and an unblocked Farley in the boundary alley. This is well executed. Although, I would have loved to see a Patterson keeper and Farley one-on-one with him going to the sideline. Farley will be asked to make those stops at some point in 2019.

Garbutt demonstrated he has the capability to be the next really good Tech edge defender. Against this outside zone read, Garbutt showed how disruptive he can be on the edge.