Film analysis of how the Tar Heels pass to facilitate the run, their bevy of offensive playmakers, multiple defensive scheme, and more. 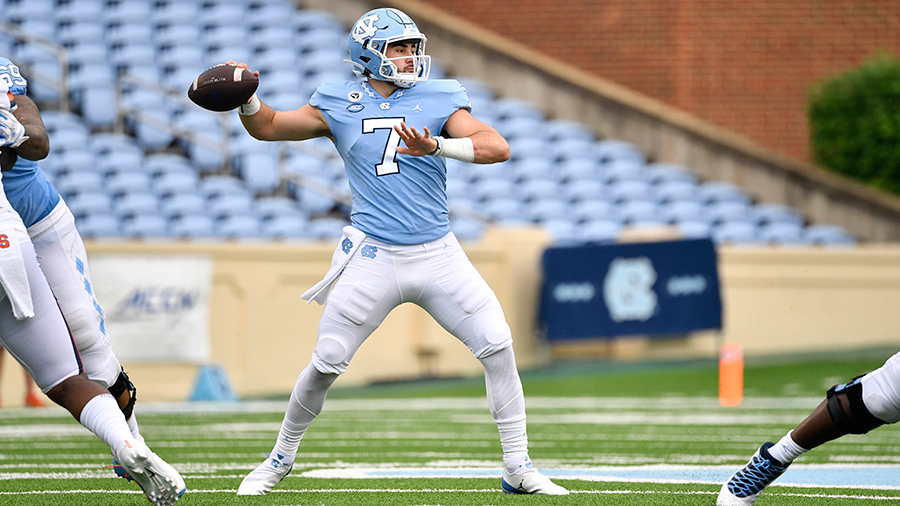 Quarterback Sam Howell has plenty of weapons at his disposal. [North Carolina Athletics]

Removed from a tough road win against Duke and ravaged by depth issues caused by COVID-19, the Hokies have ridden a dominating run game to a 2-0 start. Up next is the University of North Carolina. Justin Fuente has a remarkable record of success against the Tar Heels and on the road in the state of North Carolina. UNC is highly ranked (AP No. 8), featuring one of the best sophomore quarterbacks in the country and dynamic skill position players across the offense. With the composition of Virginia Tech's secondary changing by the minute, and North Carolina's balance between run-pass, Tech's offense will need to produce big to pull the upset in Chapel Hill.

Six in the Box: Run

While North Carolina's passing attack gets the headlines, the offense has the ability to control the game with a talented core of running backs. UNC spreads defenders outside the box, and then runs a handful of zone, counter, and power with their stable of running backs which run at tempo to tire a defense. Should the Hokies stick with two deep safeties, the Tar Heels should ride their running game to take advantage of minimal numbers in the box.

While North Carolina passes to set up the run, quarterback Sam Howell (No. 7, SO, 6-1, 225) is surrounded by explosive offensive weapons. Howell will take what the defense gives him and throw the ball to all of his top four receiving threats and both running backs with equal aplomb.

Michael Carter (No. 8, SR, 5-8, 199) rushed for more yards against Virginia Tech last season (posted 91 yards on 13 carries), yet it is the bigger back, Javonte Williams (No. 25, JR, 5-10, 220) that gives me nightmares. While the Hokies contained Williams last time around (3.36 YPC), he is as good a mix of power and elusiveness you can find at running back in the conference. With significant touches, he can wear down a defense.