Virginia Tech's road trip to Wake Forest wasn't a piece of cake. 12-play, 2,800-word film breakdown of how Wake slowed the Hokies' run game, Tech's defensive lapses, plus a look at a defensive player who took the "next step". 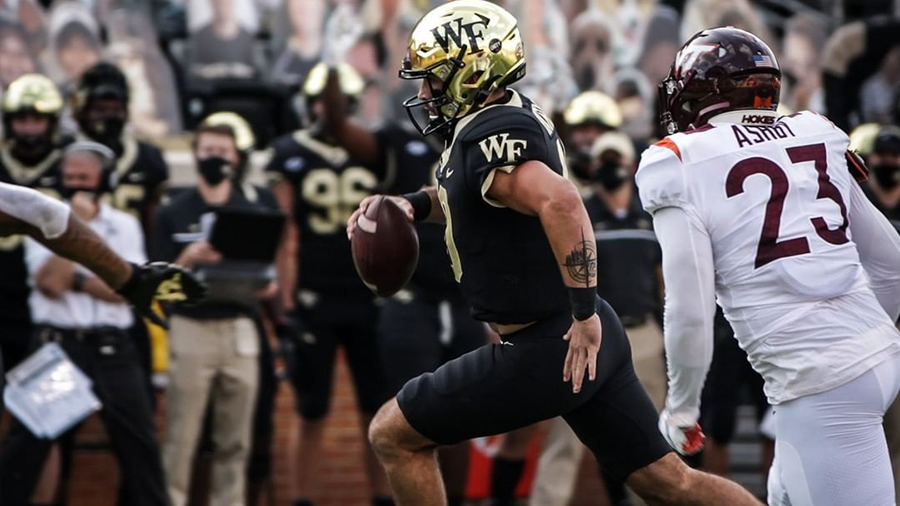 Virginia Tech fans, Vegas and myself expected the Hokies to win a shootout in Winston-Salem. Wake Forest fielded one of the worst rushing defenses in the ACC. Meanwhile, the Deacons unique delay-mesh read option offense had two tremendous running backs and vertical passing threats to torment a Tech defense which has struggled to find their footing this season.

The game turned the predictive narratives on their collective ears. After struggling early, the Hokies were much more disruptive defensively in the second half than they had looked all season. However, Virginia Tech's offense couldn't seem to find an answer for defensive coordinator Lyle Hemphill's creative adjustments that flooded the box against the Hokies' zone read attack. When challenged to win with the drop back passing game, Hendon Hooker made some uncharacteristically bad decisions and his receivers could not consistently get separation.

That the Demon Deacons kept eight defenders in the box and dared the Hokies to win with the vertical passing game was no surprise. Every opponent the Hokies have played this season attempted to flood the box. However, Wake Forest found success through two key elements. First, the Deacons used a defense in depth strategy, facilitated by their down linemen eating up Tech double teams to keep their second-level defenders clean. Second, Carlos "Boogie" Basham (No. 9) did everything and anything he wanted all game long.

Brad Cornelsen's game plan focused in-part on optioning Basham to remove him from the play. Basham spent most of the game slow playing the read option, which allowed the second and third layers of the Wake Forest defense to collapse on Herbert. The problem with optioning Basham was that he still ran the play after play down from behind despite taking the quarterback keeper first.

Fuente Sees a Need for 'Drastic Improvement' on Depth as the Hokies Move Through Spring Practice
Alex Koma, 04/08/21
23 hours (81)