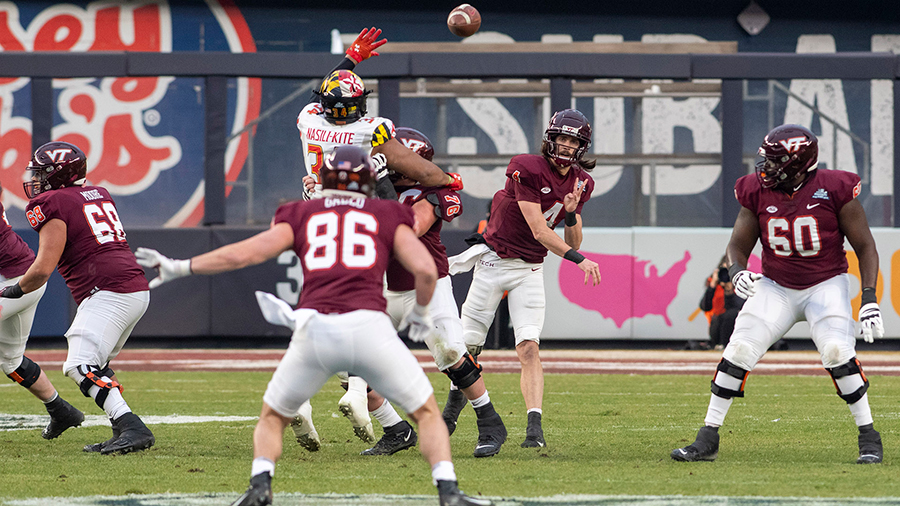 Tight end should feature in Tech's new offensive scheme, and Nick Gallo had opportunities to show what he could do. [Virginia Tech Athletics]

I am not sure what I expected during Virginia Tech's visit to Yankee Stadium, but their performance in the Pinstripe Bowl hardly warranted the gravitas of Bob Shepphard announcing Mickey Mantle stepping to home plate. With some units looking more like a scout team, the Hokies were blasted by a mediocre Maryland team that dominated the line of scrimmage. I also don't know how much stock to put into the performance. Brent Pry will make significant changes to the scheme on both sides of the football, so this wasn't exactly an opportunity for players to showcase future value to the new coaching staff. However, the listless performance did few players any favors, particularly on defense. In year one, the new coaching staff will demand a different standard of pursuit and physicality, and that accountability will be a wake up call for a lot of returners. For a small handful of players, perhaps the Pinstripe Bowl provided a window into a brighter future for the once proud Virginia Tech program.

When Virginia Tech became bowl eligible, I was hopeful a meaningless bowl game would provide the Hokies an opportunity to showcase DJ Harvey. In a game filled with coaching mishaps, Justin Hamilton's heavy use of Harvey as both a corner and a nickel was perhaps the best decision for the long-term well-being of the program. Harvey, a 5-11, 185 pound highly regarded 2021 cycle corner recruit, showcased good instincts and excellent closing speed playing man-to-man coverage and matching receivers in zone. He also had some freshman moments.