Looking for the Silver Lining

Searching the film for any building blocks going forward after a putrid 41-10 loss to North Carolina. Plus analysis of some fresh offensive concepts and a defensive liability. 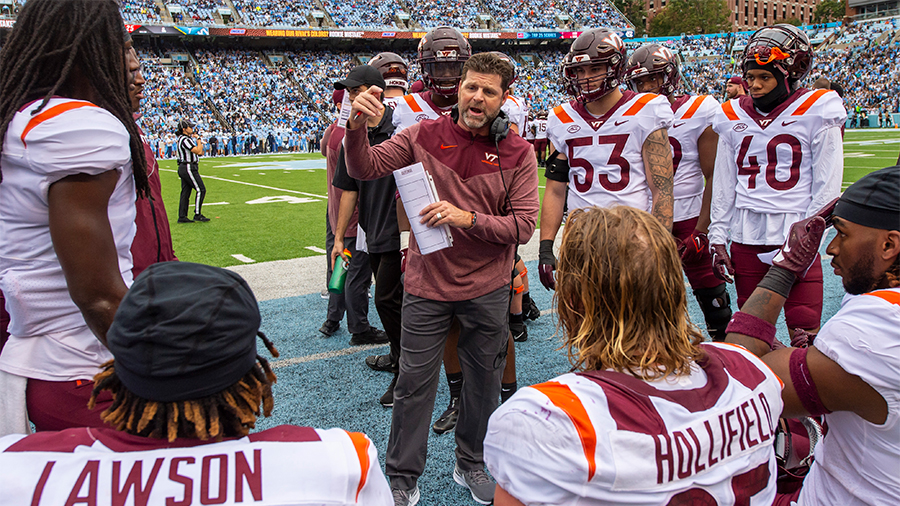 This season is all about building the foundation of the program to support a new era of Virginia Tech football. Brent Pry has promised a culture change, and on days like Saturday, where the Hokies were completely outgunned, it's difficult to see that vision. However, finding potential building blocks, even in a blowout, is a critical part of that journey.

No matter what scheme changes could take place, the knowledgeable fan should know at this point this veteran Virginia Tech group has talent limitations that can't be overcome just with X's and O's. So, I spent most of my Sunday trying to find out if there were any Hokies that showed something on Saturday that would be part of the long-term solution to returning a winner to Blacksburg.

Pair of Freshman Pop Up on Film

Even on an afternoon in which Tech's defense allowed 527 yards, two young players flashed some potential that caught my eye. Freshman Mansoor Delane was thrust into service at cornerback as Brion Murray and Armani Chatman struggled, and eventually Chatman went down with an injury. Delane looked fluid in coverage and strong in run support, although quarterback Drake Maye didn't challenge Delane to the outside.

This play in particular grabbed my attention. In last week's film review, I noted how West Virginia's receivers repeatedly crack-blocked to the inside on the Hokies' alley defenders, leaving their corners to replace the blocked defender as the alley free hitter. Murray and Chatman both badly missed tackles in space on those types of runs.

Mekhi Lewis is looking for revenge while Bryce Andonian is looking to let it fly at the NCWA All star classic
APrimusHokie, 11/22/22
6 hours (28)