Howling at the Poor Blocking 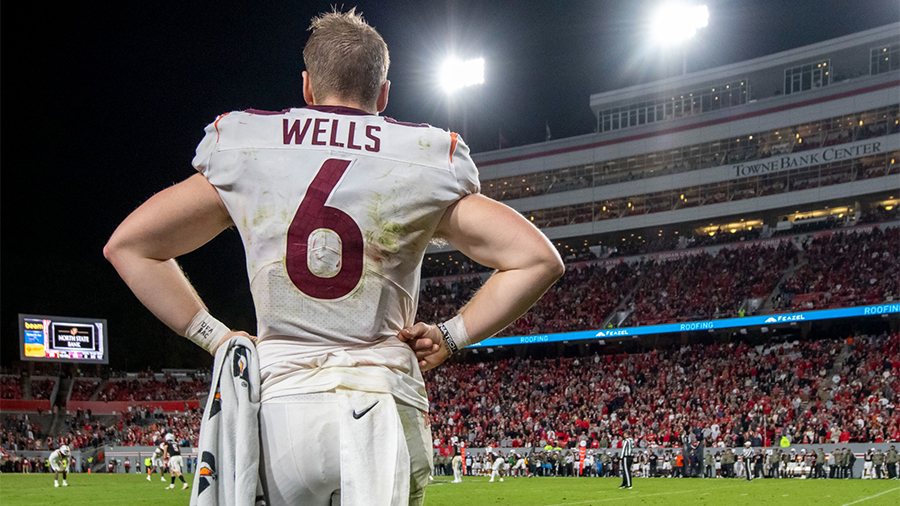 In a game that had everything, the Hokies blew a late three-score lead to lose to North Carolina State. NC State's version of Tony Gibson's 3-3 stack had Virginia Tech's offensive line moving backwards or chasing ghosts on almost every play in the first half. It led to one of the ugliest halves of offensive football I have watched the Hokies deliver. Only a stellar defensive performance kept Tech in the game. In the second half, the Hokies finally kept quarterback Grant Wells upright enough to take some vertical shots and use a little misdirection to score three quick touchdowns. However, a devastating injury to Malachi Thomas completely eliminated any threat of the running game, and NC State tee'd off against an offensive line that looked both out-talented and unprepared against the Wolfpack's pressure packages. And with the old master Charlie Wiles pulling the strings, NC State rubbed salt in the wounds by moving pre-snap to draw penalty after penalty with no response from Tech's offensive staff to sit a starter a series to send a message. Frankly, both offenses were tough to watch, and Virginia Tech out-crapped the Wolfpack.

Defensively, the lack of depth and long stretches on the field wore down Tech's pass rush, exposing the linebackers and corners in coverage. Despite only giving up 60 net rushing yards, Virginia Tech couldn't produce pressure late in the game. Three receiver formations to the field-side again gave the defense problems, as the Wolfpack hit two big plays to spark scoring drives that turned the game around.

Complete Disarray in the First Half

This zone read was a play where I would love to see the offensive line make an adjustment in their blocking scheme. NC State aligned in an odd front with field d-end Davin Vann (No. 45) lined up right in the B-gap between right tackle Parker Clements (No. 70) and right guard Kaden Moore (No. 68). The d-line slanted into the boundary in order to spill Thomas (No. 24) back into the field-side blitz from outside linebacker Drake Thomas (No. 32) and nickel Tyler Baker-Williams (No. 13). Back to the boundary, middle linebacker Isaiah Moore (No. 1) fit into the B-gap between nose tackle Joshua Harris (No. 0) and boundary d-end C.J. Clark (No. 5).