The Hokies must improve their offensive efficiency and attack the middle of the field through the air. 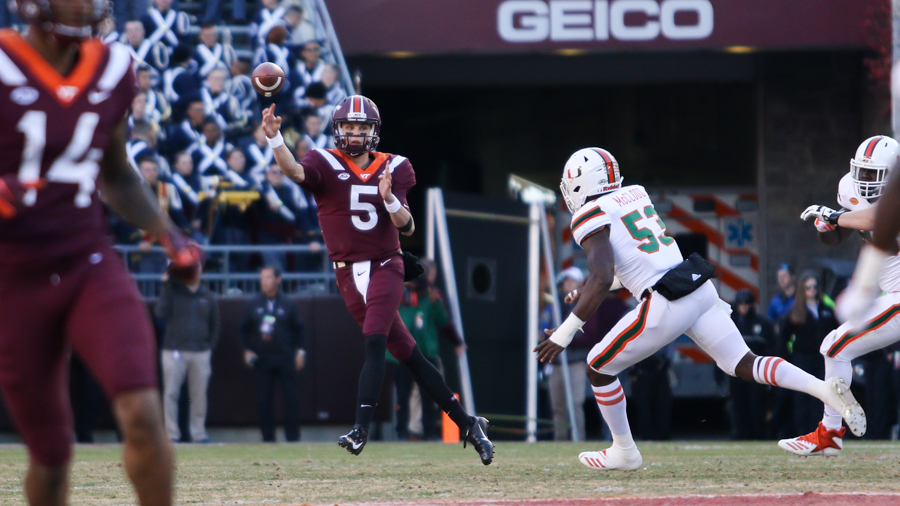 The Virginia Tech offense made strides statistically in 2018. However, despite putting up impressive numbers at times, the offense stalled at critical moments and wasn't consistent enough to make up for an inexperienced defense that struggled to get stops. The Hokies ranked No. 41 in offensive S&P+, but No. 91 in passing downs marginal efficiency and No. 83 in 3rd down conversion rate (37.31%).

A significant barrier to consistency on offense was third down efficiency, especially in third-and-long situations. Ryan Willis struggled in drop back passing situations down the stretch of 2018. That downturn was punctuated by an awful fourth quarter against Virginia in which his only meaningful completion was a desperation heave to Dalton Keene who made a spectacular play. Review of the film in those situations revealed Brad Cornelsen's play calling demonstrated a lack of trust in Willis making reads and throwing over the middle of the field. Accordingly, Cornelsen limited his passing game structure and play calling to vertical routes, swing passes with few opportunities for success, and quarterback draws. Once defenses keyed these tendencies, defensive coordinators schemed against the execution, leaving other parts of the field wide open, especially the middle.

While quarterback runs and vertical routes have always been a staple of Cornelsen's passing game design in third-and-long situations, the reliance on those types of plays almost exclusively became noticeable in Tech's loss to Miami. I don't think that was by accident or reflective of the opponent's scheme. Willis made a handful of major mistakes throwing into the middle of the field in obvious passing situations against Miami. For the rest of the season, Cornenlsen's passing down structure changed from incorporating some intermediate throws and quick reads to almost exclusive use of one-man routes and screens defaulted to quarterback runs if the initial read wasn't there. Almost all of Willis' targeted throws were outside of the hash marks in these situations. Let's take a look at what triggered the change.

Miami head coach/then defensive coordinator Manny Diaz utilizes a wild array of odd blitzes to create negative plays and force turnovers. Those blitzes also create space for playmakers if the quarterback can identify the space and get the ball out before pressure gets to him. Cornelsen incorporated intermediate throws like curls underneath zero coverage regularly to combat Miami's blitzes. On this 3rd-and-8, Miami blitzed two linebackers, field-side A- and B-gap, and ran a Cover 1 (man with a single deep safety) behind it.

Willis correctly identifies the receiver which has the most available space to work. Damon Hazelton, split wide to the field-side, faces outside leverage and curls up inside. Willis hits Hazelton right as he comes out of his break.

If you watch the Virginia and Cincinnati game films, you don't see utilization of this kind of intermediate route. Against Virginia, which uses a significant amount of robber coverage and disguising, there's an argument for being wary of these types of throws. However, the Bearcats almost exclusively deployed Cover 1 or Cover 4, with defenders staying over the top. These throws were there all day, but weren't exploited. It is also worth noting that every receiver in this pattern is a potential checkdown if Hazelton doesn't break open. Note how that visual changes in the last couple of games.

Why was Cornelsen so spooked?